The nascent rebound from a two-year low in emerging-market stocks is faltering on concern the Federal Reserve and other global policy makers will fail to orchestrate a soft landing for the world economy.

“It’s too early to say this is the bottom — too early to say the only way is up,” said Wei Li, global chief investment strategist at BlackRock Inc. “We need to see a dovish pivot from the Fed” before buying-the-dip returns, she said.

The MSCI Emerging Markets Index has rebounded about 8% since dropping to a two-year low on May 12, posting a gain in May after the longest monthly losing streak in four years. So far in June, however, the gauge is again trailing its developed-market peers.

Fed Chair Jerome Powell warned last month the US will keep raising interest rates until there’s “clear and convincing” evidence inflation is in retreat. His tough stance was supported on Friday by better-than-expected US data that signaled economic optimism even as monetary support is stripped back. Still, concern about the world’s economic outlook is keeping a lid on emerging-market stock valuations.

State Street Global Markets said a bigger rally in developing-market equities may not be on the cards this year, while Goldman Sachs Group Inc. said investor focus is on risks to growth as central banks act to cool surging prices. 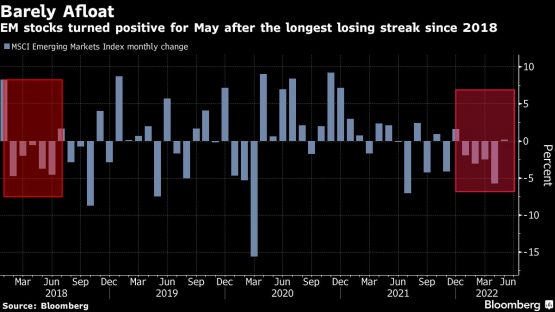 The MSCI gauge has dropped almost 14% this year, roughly in line with dollar-term returns from the Stoxx Europe 600 Index and the S&P 500. Emerging stocks advanced in May on news from China, which relaxed Covid restrictions and moved toward peace with big tech firms, as well as inflows targeted at the safest, least volatile companies.

The iShares MSCI Emerging Markets Minimum Volatility Factor ETF attracted a record $2.4 billion of inflows last month. But the biggest US exchange-traded fund tracking the MSCI EM index lost $474 million in May, its fourth month of outflows this year.

Developing countries, where consumers generally have lower disposable incomes and are more affected by surging prices, are grappling with multiple headwinds caused by soaring energy and commodity costs, supply-chain issues as well as slower growth in the developed world. This is worsening the outlook for company earnings, especially for retailers and consumer-facing staples.

“Discretionary companies will see margin pressure given higher input costs and slower growth if they try to pass higher prices on to the already pinched consumers,” said Daniel Grana, a portfolio manager at Janus Henderson Investors in Boston. “That is particularly true for consumer facing sectors in commodity importing countries” as raw-material exporters benefit from higher prices, he said.

Consumer-price readouts from China, Egypt and Mexico this week are set to provide a better insight into just how entrenched inflation has become across developing nations, potentially piling more pressure on central bankers to act decisively to reduce price growth without derailing growth.

There are some exciting long-term prospects in emerging equities, “but the second half is going be too early for that,” said Daniel Gerard, a senior multi-asset strategist at State Street Global Markets. “We need to see the impact of quantitative tightening” and “get some sense that inflation is in check,” he said. Gerard is betting on Latin America to continue to be the most attractive emerging region due to its exposure to materials and commodities as well as defensive sectors like telecommunication. The MSCI Emerging Markets Latin America Index has gained about 15% this year, with Brazilian stocks returning 23%.

Here are the main things to watch in emerging markets in the week ahead: