Here’s how the oil crash is hitting emerging-market currencies

Crude importers like South Africa and Turkey, whose currencies are close to record lows, haven’t been spared either.
By Paul Wallace, Bloomberg 18 Mar 2020  07:01 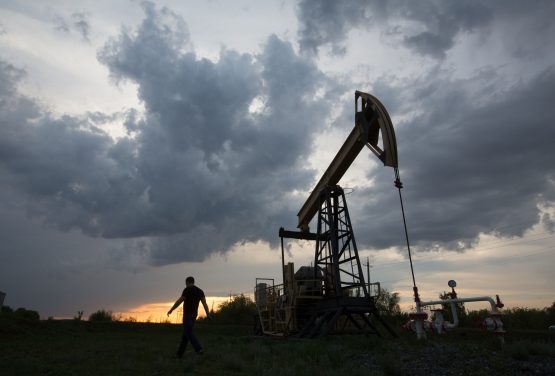 For oil and gas exporters, the impact has been immediate. Even Gulf states with long-standing pegs to the dollar, such as Saudi Arabia, are coming under pressure.

Crude importers like South Africa and Turkey, whose currencies are close to record lows, haven’t been spared either.

Brent crude prices have crashed almost 55% this year to below $30 a barrel — within touching distance of their low during the last major slump from 2014-16 as the coronavirus curbs global demand for energy. The rout accelerated this month when Saudi Arabia triggered a price war after failing to convince Russia to accept coordinated production cuts. Here’s a look at how different regions are coping:

The ruble has slumped almost 10% against the dollar this month and Russian local-currency bonds are the third-worst performers among the 25 emerging markets tracked by Bloomberg Barclays indexes. That pressure is one reason why analysts doubt the central bank will lower interest rates on March 20, despite economic growth being slow even before the virus took hold.

Still, the government seems in no mood to mend ties with the Saudis and cut crude supplies. President Vladimir Putin’s decision to fully float the ruble in late 2014 should stand the country in good stead by helping to ease any reduction in the current-account surplus. Russia’s fiscal conservatism in recent years unusually for a major economy, it runs a budget surplus  will also help. So will the fact that the ruble is undervalued according to real effective exchange rate calculations, which take into account a country’s trade balance and inflation.

Kazakhstan, central Asia’s biggest oil producer, said on Monday it would stop trying to prevent the tenge from weakening after an emergency rate hike last week proved futile. But it’s already depreciated 12% in 2020, so further losses may be limited.

With the exception of Oman, the currency pegs of the six-member Gulf Cooperation Council seem stable for now. Prices for Saudi riyal forward contracts, a gauge of speculative bets against the currency, have fallen over the past week. And even at their year-to-date peak on March 9, they were nowhere near highs reached in 2016. It’s a similar theme for the United Arab Emirates, Qatar, Kuwait and Bahrain.

But pressures will build. Oil staying at $30 a barrel would mean the GCC’s overall fiscal deficit rises to 14% of gross domestic product this year, or $228 billion, according to research from Ehsan Khoman, Dubai-based head of Middle Eastern research at MUFG Bank. That would likely make GCC currencies even more overvalued by REER measures. For Iran, falling oil prices will only worsen the damage from US sanctions and the fact it has more confirmed cases of the virus than any other Middle Eastern nation. The rial has depreciated almost 30% on the black market since October.

Nigeria, Africa’s biggest oil producer, is reacting to the latest crisis in a similar fashion to that of 2014 by trying to stop the naira from weakening and tightening capital controls. The central bank, which has kept the naira in a quasi-peg since mid-2017, said last week it has no plans for a devaluation and threatened to investigate any local currency dealers suggesting otherwise.

It might only be a matter of time before it has to give up, however. Its foreign reserves have fallen by 20% since July to $36.1 billion and the naira is the most overvalued of the major oil currencies, according to the International Monetary Fund’s REER calculations. Goldman Sachs says it would take an exchange rate of 600 naira per dollar for Nigeria to generate a healthy current-account surplus with today’s oil prices. That’s almost 40% weaker than the naira’s current rate of 365. 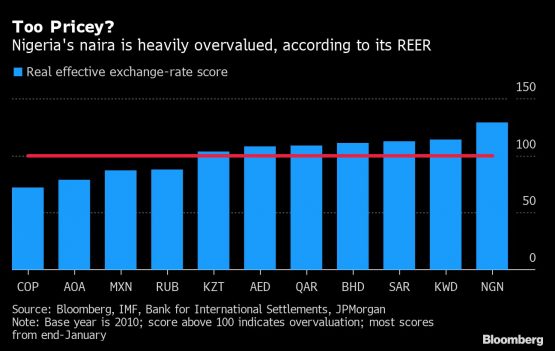 Angola is also at risk because crude accounts for almost all its exports. It did ease some earlier pressure, however, by ending the kwanza’s peg two years ago, since when it’s fallen 67% against the dollar. Still, the country’s foreign-currency shortages triggered by the 2014 crash never completely went away, and last month, the kwanza was trading almost 20% weaker than its official price on the streets of Luanda, the capital.

Mexico and Colombia’s pesos are the two worst-performing currencies in emerging markets this month, each falling to record lows. The former is fast losing the appeal that made it the world’s best currency for carry traders, who borrow in low-yielding units such as the dollar to invest in ones with higher rates.

Derivative traders don’t expect the Mexican peso’s losses to end just yet. They’re more bearish about it over the next month than any other currency, according to risk reversals, which measure the premium of options to sell a currency over those to buy it.

Colombia’s peso looks to be in a stronger position. Analysts at Wells Fargo & Co. forecast on March 13 that it would weaken to 4 100 per dollar by the end of the third quarter almost in line with its current rate before rebounding.

Oil-exporting Brazil has also seen its currency drop, with the real closing above 5 per dollar for the first time this week. The central bank meets on March 18, with most economists forecasting that it will lower interest rates.

Such has been the panic in global markets that even the currencies of net oil importers have tanked. South Africa’s rand has fallen 16% this year, with foreign investors pulling more than $4 billion out its stock and local-currency bond markets. The rand’s risk reversals have soared to around 18-month highs in a signal of more pain to come, with investors concerned about South Africa potentially being downgraded to junk by Moody’s Investors Service. Analysts expect the central bank to cut rates on March 19, which could cause more bond outflows.

In Turkey, local banks’ efforts to keep the lira stronger than 6 per dollar lie in tatters, with the currency down 6% since early March to 6.46. Interest rates are already in negative territory when inflation is taken into account and there will be little to stop further depreciation after monetary policy makers cut their main rate by 100 basis points to 9.75% in an emergency meeting on Tuesday, two days’ ahead of schedule.

Bollocks – what a ‘’ misleading’’ article on South Africa and the plunging Rand and oil price.

The rand is weakening period – but not due to the falling oil price.
When hurricanes Katrina and Rita slammed into the soft underbelly of the US’s Texas-Louisiana oil complex in 2005, they tore a large hole in world supply. Prices of gasoline, diesel fuel, and home heating oil soared.
History will tell us that in 2005 we arrived at a state of affairs in which the balance of supply and demand was so fragile that weather, or not to mention industrial acts of sabotage, did have a significant on world energy supplies.
Russia, of course, pays a big role in the supply and demand of oil and it should be obvious that as long as the US is beholden to potentially unfriendly sources of oil and gas, we are all vulnerable to economic crisis over which South Africa has very little control.
But, the Corona virus had the opposite effect on the market – the oil price plunged and supply increased!
The Oil price was approximately US$ 66 per barrel and the USD/Rand 14.50 before the ‘’Virus’’ arrived, hence the oil price for imports was approximately R 957 per barrel.
The Oil price post the arrival dropped to US$ 30 per barrel and the rand weakened to USD/Rand 16.75 before the ‘’Virus’’ arrived, hence the oil price for imports dropped to R 952 per barrel.
Why should the Rand weaken on cheaper oil imports as the price dropped by approximately 47 %?

Should read – the Rand Oil price dropped to R 502 per barrel….