In the aftermath of an extremely positive jobs report out of the US, the dollar has accelerated strength and in turn, commodity prices have continued to fall. Local miners bare testament to bearish sentiment prevalent in the commodity space, as two thirds of the resource index’s gains, in 2015, have now been eroded since the short-term highs realised mid-February this year.

The extent of gains last week has been dwarfed by the extent of losses over the period. Making up the bulk of the decliners list, are resource counters with earnings attributable in large proportions from iron ore (including Exxaro through investment in Sishen) a commodity which is in overabundant supply amid waning demand.

Aspen Pharmacare is the anomaly amongst the underperforming hierarchy, falling significantly at the tail end of last week after news broke that GlaxoSmithKline had sold half of its 12.4% stake in the company, through an accelerated book build, at a price of R372 a share. 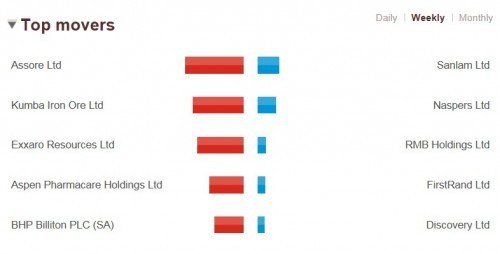 Financial counters remain the sector in favour with a relative outperformance against both its broader industrial and resource sector peers.

On the earnings front, FirstRand released interim results in which normalised earnings were reported to have increased by 15% against the prior year’s six month comparative. Net Interest Income (NII) for the period increased by 16% y/y while Non-Interest Revenue (NIR) grew by 11% y/y and the company achieved a 24% Return on Equity (ROE).

RMB Holdings (34% invested interest in FirstRand) also saw normalised earnings growth of 15% with the company’s intrinsic value up 42% over the period. A dividend of 122c per share was declared, 22% higher than the comparative period.

While our local bourse has started the week in a positive fashion, the trend persists in that; losses are being realised in the resource department, while industrial and financial counters post modest gains.

The upcoming Federal Open Market Committee (FOMC) meeting and fund’s rate decision, on Wednesday in the US, will take centre stage in terms of this week’s economic calendar. Market participants will be looking for clues in Federal Reserve bank chairperson Janet Yellen’s testimony relating to whether or not we will see interest rate start to rise as soon as June this year. Global markets are expected to remain tentative until the data release.

The question is where will mining shares find support. The answer is if, and when the USD finds resistance against the Euro at 0.85. That implies a further 30% decline for mining shares. Just imagine the “value” they will offer then!

At the current rate of decline of the price of iron-ore, a tik-head will soon have to pay to get his manhole cover weighed at the scrapyard!