The technology-focused Nasdaq 100 fell into a correction on Thursday, a swift reversal after touching an all-time high in November as a surge in US Treasury yields has dented the allure for high-flying growth shares.

The Nasdaq 100 dropped 1.3% to close at 14 846.46, pulling it down more than 10% from its November 19 closing record. Big swings in growth stocks continued Thursday, with the tech-heavy index turning sharply lower in the final hour of trading after earlier rising as much as 2%. On Wednesday, the broader Nasdaq Composite Index fell over the threshold into correction territory.

Amazon was the biggest decliner Thursday among megacap tech stocks, shedding 3% to end at its lowest level since March 2021.

Yields have soared on the prospect that the Federal Reserve will deliver more than a quarter-percentage point rate hike in March to tame inflation. The benchmark 10-year US Treasury yield topped 1.87% on Tuesday, its highest level since January 2020 before the coronavirus pandemic roiled markets. On Thursday, the 10-year yield slipped to 1.82%.

Shares of US tech companies have retreated in the new year as investors swap growth stocks for energy, financials and other cyclical shares that stand to benefit from improving economic growth and higher interest rates. Shares of smaller, fast-growing tech companies have been especially hurt by concerns that they would be more vulnerable to tighter monetary policy since they are more reliant on capital markets for financing. 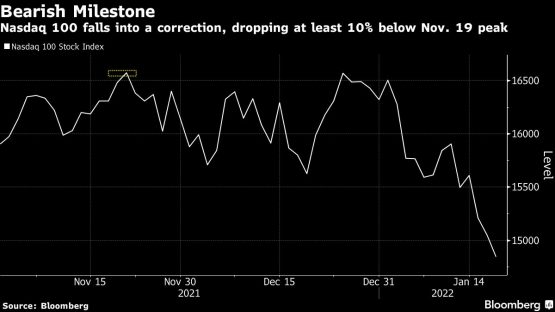 “Growth stocks are getting hammered this year, especially lower quality ones with very high valuations,” Eric Beiley, executive managing director of wealth management at Steward Partners Global Advisory, said in an interview. “We’re likely going to see more muted returns in the US equity market this year as investors shift to value and cyclical stocks as the Fed shifts to raising rates.”

Following a year of stellar double-digit gains and earnings growth for US stocks, most strategists expect more modest returns in 2022 as the Fed winds down its pandemic-era stimulus measures that sent major averages to numerous records. Treasury yields are quickly moving higher as investor expectations grow that the central bank will lift rates earlier and at a faster pace, with speculation about a 50 basis point move in March.

Still, analysts don’t think lingering concerns about tighter monetary policy or the spread of Covid-19 will prevent the broader market from notching another year of strong gains. In fact, there have been four distinct periods of rate-hike cycles by the Fed in the past three decades, which haven’t historically been detrimental for equity markets. On average, tech is among the best performing S&P 500 sectors during those cycles, with a gain of nearly 21%, according to Strategas Securities.

“It’s not abnormal to see a rotation out of growth stocks when rates rise,” Joseph Biondo, chief executive officer at Biondo Investment Advisors, said in an interview. “This year will likely be a tale of two halves in the stock market. In the first half, we’ll likely see a continuation of the revaluing of growth stocks, which will create great buying opportunities in the second half of the year and beyond once the dust settles.”