Powell says US taper could start in 2021, with no rush on rate hike

‘… anyone hoping for a steer on the timing of the taper will have been disappointed’ – economist at Pantheon Macroeconomics.
By Matthew Boesler and Craig Torres, Bloomberg 28 Aug 2021  08:59 Federal Reserve Chair Jerome Powell said the central bank could begin reducing its monthly bond purchases this year, though it won’t be in a hurry to begin raising interest rates thereafter.

The economy has now met the test of “substantial further progress” toward the Fed’s inflation objective that Powell and his colleagues said would be a precondition for tapering the bond-buying, while the labor market has also made “clear progress,” the Fed chief said Friday in a virtual speech to the Kansas City Fed’s annual Jackson Hole symposium.

At the Fed’s most recent policy meeting in late July, “I was of the view, as were most participants, that if the economy evolved broadly as anticipated, it could be appropriate to start reducing the pace of asset purchases this year,” Powell said.

“The intervening month has brought more progress in the form of a strong employment report for July, but also the further spread of the delta variant,” he said. “We will be carefully assessing incoming data and the evolving risks.”

In stride
Investors took the news of the coming taper in their stride — avoiding any hint of the so-called 2013 “tantrum” when the Fed surprised markets by unexpectedly announcing it would start to pare back asset purchases. The S&P 500 rose during the much-anticipated address to stand more than 0.6% higher. Ten-year Treasury yields nudged slightly lower to around 1.33% and the dollar fell.

“Chair Powell stuck to the script in his Jackson Hole speech; anyone hoping for a steer on the timing of the taper will have been disappointed, but it was never likely,” said Ian Shepherdson, the chief economist at Pantheon Macroeconomics.

At the July Federal Open Market Committee meeting, most Fed officials agreed it would probably be appropriate to begin tapering the central bank’s $120-billion-a-month bond-buying program before the end of the year, according to a record of the gathering. Some are pushing for a move as soon as next month.

Monetary policy makers would like to conclude the purchases before they begin raising interest rates, and several in June saw a possible need for rate increases as early as 2022 amid inflation that is running above the central bank’s 2% target. The Fed cut its benchmark rate to nearly zero and relaunched the crisis-era purchase program last year at the onset of the pandemic. 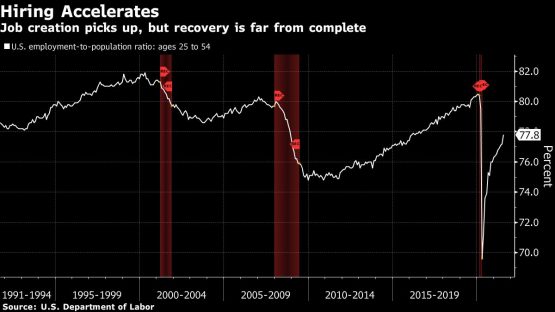 Powell cautioned that a move to begin winding down the bond-buying program should not be interpreted as a sign that rate hikes would soon follow.

“The timing and pace of the coming reduction in asset purchases will not be intended to carry a direct signal regarding the timing of interest-rate liftoff, for which we have articulated a different and substantially more stringent test,” Powell said.

“We have said that we will continue to hold the target range for the federal funds rate at its current level until the economy reaches conditions consistent with maximum employment, and inflation has reached 2% and is on track to moderately exceed 2% for some time,” he said. “We have much ground to cover to reach maximum employment, and time will tell whether we have reached 2% inflation on a sustainable basis.”

Quarterly projections published in June showed seven of 18 FOMC participants thought it would be appropriate to begin raising rates next year, while six more expected rate increases would become appropriate by 2023.

“On net, tapering remains on track and the next question is when it will be appropriate to hike,” Ian Lyngen, head of U.S. rates strategy at BMO Capitol Markets, wrote in a note to clients. “This will be data dependent and implicitly a function of path out of the pandemic and toward the new normal.”

Powell’s remarks of late — when it comes to the labor market recovery and racial equity — have resonated and aligned with the Biden administration’s view of the economy, according to White House thinking.

The Fed chief spoke as investors awaited a decision from President Joe Biden on whether to renominate him for a second term or pick someone else. Bloomberg reported on Thursday that Biden advisers were considering recommending Powell for reappointment.

Total U.S. employment is still about 6 million jobs below pre-pandemic levels. June and July were strong months for hiring as restrictions on service industries were lifted across the country, but the recent spread of the coronavirus delta variant is raising uncertainty about prospects for the months ahead.

The Fed chair stuck to the central bank’s message that the current bout of inflation is likely to be transitory, emphasizing that the recent rise “is so far largely the product of a relatively narrow group of goods and services that have been directly affected by the pandemic and the reopening of the economy” and should be expected to dissipate.

Powell noted that there is little evidence of a “wage-price spiral,” where pay increases might threaten excessive inflation.

He pointed to inflation expectations measures as a sign that consumers, businesses and investors also share that assessment, and highlighted the risk that downward pressures on inflation, of the kind observed over the last decade, could reassert themselves once the pandemic ends.

Global factors
“While the underlying global disinflationary factors are likely to evolve over time, there is little reason to think that they have suddenly reversed or abated,” Powell said. “It seems more likely that they will continue to weigh on inflation as the pandemic passes into history.”

This year’s symposium, typically a high-profile retreat attended by central bankers from around the world, was originally slated to return to its usual in-person format, but the Kansas City Fed scrapped that plan on Aug. 20 amid rising coronavirus case counts in Teton County, Wyoming.

During last year’s virtual proceedings, Powell unveiled a new strategy for monetary policy making which marked the conclusion of an internal review that lasted nearly 20 months.

The new framework dictates Fed officials allow the economic expansion to progress further than they have in the past before raising interest rates, to drive unemployment rates down faster and allow low-income groups to share in the benefits from a strong economy.

That also means allowing inflation to overshoot the central bank’s 2% target for a time, to make up for periods coming out of downturns when it underruns the target.

Wait for the mother of all corrections.

Dear Mr Powell the asset purchases are a vanishing contributor to GDP. Better raise interest rates sooner because your ability to control the outcome is also vanishing.

If you want to reduce inflation stop dishing out helicopter money. Here in SA with Covid Delta and lower vaccination rates our services industry is still willing to work.

The debt trap does not exist. Inflation is history. Interest rates have become meaningless. My parents were born on Mars. I will be going home soon.

At some point the market will realise that central banks cannot and will never again raise rates under the current US-debt based international financial regime.

ZIRP or (until) bust, baby.

I don’t get markets. The Fed is running record stimulus, Washington is passing 2 trillion stimulus and aide packages, debt levels are at record levels and aiming much higher, there are temporary laws against evicting tenants in default and home owners in arrears.

None of above sound like a happy booking healthy economy to me.

But all the listed markets are at record levels. Wall street is insanely disconnected.