Q1 2016: Sectors that kept their heads above water, and others that flagged 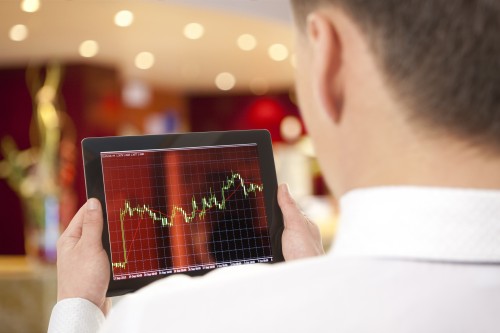 We take a look at the performance of global and local markets over the first quarter (Q1) of 2016.

China has led the decline among major international indices, as data continues to support a slowdown in the second largest economy in the world.

The People’s Bank of China (PBOC) has increased stimulus efforts (such as lowering reserve requirements for banks) to try to stem the tide of weakening economic data prints and maintain growth above 6%. Ratings agencies and market participants alike have expressed concerns over the country’s sovereign debt relative to the slowing rate of economic growth.

In Europe, the possibility of the UK leaving the European Union (i.e. ‘Brexit’) has added further uncertainty in the market place. The UK is set to hold a referendum in June 2016 relating to a possible Brexit. The European Central Bank (ECB) announced further monetary easing measures in an attempt to aid inflation and economic growth within the region. While US equity markets (and global equity markets) started the year off on negative footing following the interest rate hike in December 2015, the latter part of the quarter saw a modest recovery following a dovish tone set by the Federal Reserve Bank, in lieu of global economic growth weighing on concerns.

Non-farm payroll growth has managed to exceed expectations in two of the past three months, while the unemployment rate remains at 5% after reaching 4.9% in March.

The first quarter of 2016 saw the South African Reserve Bank (Sarb) raising lending rates by 75 basis points (0.75%) in a preemptive move to try to curb inflation, which was recorded at 7% in February 2016 (annualised). The move came despite the outlook for economic growth for 2016 being lowered by the World Bank to 0.8%, the International Monetary Fund to 0.7% and Sarb itself to 0.8%.

The prospect of an extended timeline, in terms of when the US will continue to raise lending rates, has kept the US dollar relatively weak and bodes well for commodity prices in the year thus far. While gold and precious metals have seen the added benefit of increased safe haven demand, iron ore has seen modest evidence that Chinese demand (through trade import data) has started to improve. While supply of iron ore remains elevated in the marketplace, comments from iron ore mining giant Vale, that it could lose as much as 100 million tons of annual output over the next three years (due to pending environmental licences), has further supported a rebound in the price of the steel-making ingredient.

Crude oil posted a modest recovery in the first three months of the year and trades well off the lows of 2016. Suggestions of a production freeze by Organisation of the Petroleum Exporting Countries (OPEC) and Non-OPEC members and lower-than-expected US crude inventories, in the last few weeks of March, have perhaps supported the rally, although short covering has almost certainly helped extend the commodity’s recently good run.

The rand has started to recover from its worst levels post the ‘Nenegate’ scandal in December 2015. Tightening monetary policy locally and global monetary policy remaining accommodative, has aided renewed strength in the rand. It would appear that prospects of ratings downgrades by major ratings agencies, have been largely digested by the market and perhaps a surprise move would be for South Africa to avert arriving at the sub-investment grade destination. 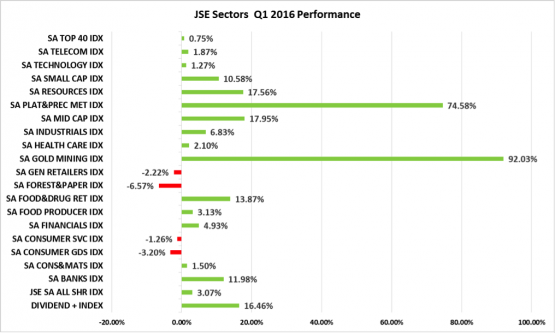 While gains within the sector have been massive, they do emerge from a relatively low base. A share that has declined 50% will then need to rally 100% to recoup its initial losses. The rally within the sector has also manifested despite significantly deteriorating earnings being reported for the most part, which is perhaps indicative of these counters having been severely oversold over the last two years.

Among the underperforming indices in the three-month period were consumer goods, consumer services and general retailers. These sectors would have been negatively affected by rising interest rates and the fear relating to the consumers’ diminishing disposable income and ability to meet increasing debt costs. Companies such as Tiger Brands and Pioneer Foods would have also been affected by the need to import more grains in lieu of the drought in South Africa.

Forestry and paper was the worst performing sector although largely weighted to the Mondi Group’s performance. The company’s share price has corrected from the stellar gains realised last year, with a weakening British pound perhaps dampening the perception of earnings to be translated.