The rand traded nearly 1% weaker early on Friday, near its lowest in 10 weeks, amid souring emerging market sentiment led by Turkey’s currency crisis and increased tension between China and the United States. 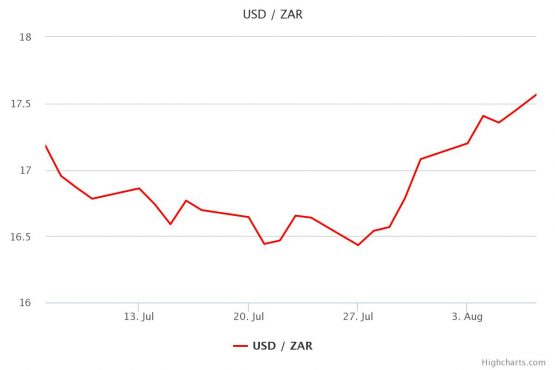 Turkey’s lira plunged to a record low on Thursday, just two years after a devastating currency crisis that brought a recession and exodus of foreign investment, raising fears that state efforts to stabilise the currency could fizzle and spark bigger problems for the Middle East’s largest economy.

That kept pressure on other emerging currencies, which often move together as investors view them as a group with similar risks and rewards.

Citing security concerns, Trump issued executive orders on Thursday that will ban US transactions with ByteDance, owner of the popular video-sharing app TikTok, and Tencent, owner of the WeChat app, in 45 days’ time.

“Markets will likely remain cautious ahead of the US economic data to be released this afternoon,” said analysts at Nedbank, referring to employment and consumer credit figures. “Liquidity in the rand will likely be tested going into the close as SA heads into a long weekend and some position-squaring is likely.”

This is why you accept loans in hard currency very reluctantly. They can turn out to be very very expensive.

True but what other options have we got?

Only real option is to fix it internally. No public servants wage increases for 24 months. Hike VAT rates. Increase company tax to 30% for 24 months. Spread the pain. Oh and of course stop funding SOE.

A government borrowing money internationally, is like your best mate borrowing from you. Both know that there is nothing you can do if they do not pay it back.

Anyone that has ever loaned friends or family money – in most instances will know exactly what i am talking about. A non stop string of excuses and an inevitable parting of ways. Many businesses are having to reimagine the way they do business and are using technology to get them there.