The rand has strengthened, while analysts keep forecasting a decline.
By Colleen Goko, Reuters 1 Jun 2020  07:19 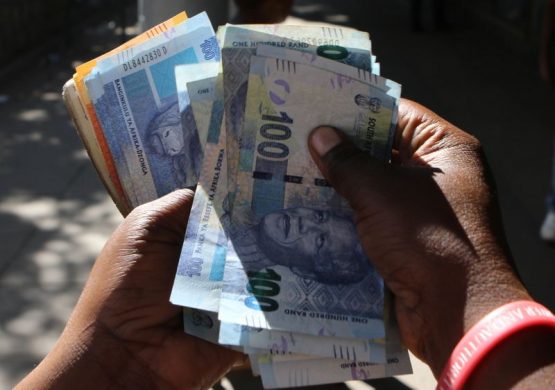 The rand’s rapid turnaround from April’s record low has already burnt some traders’ fingers. There may be more victims, judging by the discrepancy between forecasts for the currency and its actual level.

TD Securities’ long-dollar-rand trade, opened on May 21 at 17.92 per dollar, was stopped out just eight days later when the currency strengthened below 17.45, handing the position a 2.6% loss. The trade was entered on expectations that easing by the South African Reserve Bank would hurt the attractiveness of the currency – but the opposite happened.

The bearish predictions were not limited to TD. Analysts in a Bloomberg survey see the rand reaching 18.95 per dollar in the second quarter – implying a decline of around 8% from Friday’s level of 17.50 per dollar. The probability of the rand weakening that much by the end of June is less than 10%, according to Bloomberg’s forecast model based on prices of options to buy and sell the currency. In the context of rising US-China tensions over security legislation in Hong Kong, along with a deteriorating economic picture in South Africa, the timing of the rand’s rebound “has been a bit surprising,” said Per Hammarlund, chief emerging markets strategist at SEB AB in Stockholm. Still, “given that the rand and most other emerging-market currencies have some way to go before being back at levels from before the Covid-19 outbreak, the rally has enough legs to last through the end of the second quarter,” he said.

The rand has strengthened 5.6% in May, it’s first monthly advance this year and the best since January 2019. On the way, it breached two key resistance levels to further gains: the 50-day moving average at around 18.20 and the 23.6% Fibonacci retracement from April’s record low, at 18.04. Next up is the 38.2 retracement at 17.24, and a sustained breach could see the currency heading toward 16.50 per dollar, according to Credit Suisse SA and Standard Bank Group Ltd.

While a tentative return of risk appetite worldwide contributed to the rand’s advance, the currency also received some support from a relatively hawkish central bank. The regulator on May 21 curbed expectations for further aggressive easing after cutting its benchmark interest rate for the fourth time in as many months in a bid to support an economy forecast to slump deeper into recession.

Also bolstering the currency were signs that record outflows from South Africa’s domestic bond market may be coming to an end. Foreign investors started trickling back into local debt in the second half of May, after selling a net R66 billion this year. 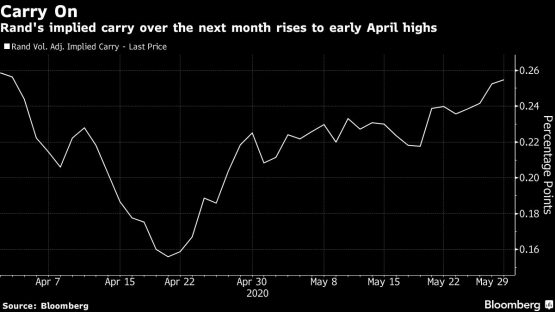 After returning 6.2% in May for investors who borrow dollars to buy high-yielding currencies, known as the carry trade, the rand’s one month volatility-adjusted implied yield has climbed to the highest in nearly two months. That suggests more rewards may be in store for investors willing to risk buying one of the emerging world’s most volatile currencies.

Still, there are risks ahead. Rising tensions between the US and China could spill over into emerging-markets, while South Africa’s economy has yet to show the full hit of the coronavirus lockdown.

“The question on most people’s minds at the moment, is what to make of this recovery in the rand and can it be sustained to much stronger levels?” asked Warrick Butler, a Johannesburg-based trader at Standard Bank. “The answer to this is not that straightforward,” though short-term gains are likely to continue, he said.

Still, “there is only so far it can go,” Butler said. “The more the elastic band stretches, the more pain will be felt upon its release.”

We can calculate the cost of lockdown by using the movement of Newgold, the JSE-listed gold ETF. The price of Newgold has shot upwards by 30% since world economies have implemented lockdown measures. That is an indication of what happened to the purchasing power of our salaries, wages and government grants. The economic costs of lockdown-measures will be paid for by every individual in South Africa. The price of lockdown for each of us is 30% of our salaries, wages, grants, stipends and pocket money.

Most economically illiterate people are under the false impression that there won’t be any personal cost for them. They are wrong. This brings us to the question – if everyone knew that they will have to cough up 30% of the purchasing power of their salaries to pay for the economic carnage of lockdown, would they still support it?

Can we afford lockdown? The free-market capitalist system is the most efficient distributor of “food parcels” ever invented by man. Any individual is free to exchange his labour for a “food parcel”. This is a highly efficient and fair system because unscrupulous individuals cannot claim 4 or 5 “food parcels” from different donors at the same time. No government or charity organisation can distribute food parcels as efficiently, fairly and sustainably as the free market does. Lockdown destroyed the mechanism that distributes “food parcels”.

The US Fed is putting jet fuel in the printing presses to manufacture a weaker dollar. This is part of the reason for the correction in the rand. The rand is also correcting against the euro. The rand is in a counter-trend correction to come and test support. The Aussie-dollar and the Brazilian real are doing the same. The longer-term trend is weaker.

Exactly. Once the correction is finished, the best thing you can buy yourself is JSE:GLDcfd.

The key issue is volatility – you need to have an appetite for that plus the fundamental risks to trade $/R. In the current climate I think fewer investors will be at the table for the next 12-18 months which will add to the volatility. The snapping elastic band is an excellent analogy!!

Its cause by a weak dollar due to massive dollar printing in the US. It is dollar weakness, not rand strength. The tail doesn’t wag the dog.