Here are some of the investment strategies funds are pursuing.
By Ronojoy Mazumdar and Marcus Wong, Bloomberg 14 Jul 2022  07:18 The prospect of a global recession is sending money managers scrambling to rework their portfolios — nowhere more so than in emerging Asian bonds which have already been hammered this year by accelerating inflation and slowing growth.

Some of the investments that fund managers are favouring as a way to ride out the downturn include high-yield debt in Indonesia and Malaysia, relatively inflation-proof South Korean securities, and Asian investment-grade credit with exposure to China.

Surprise policy tightening in Singapore and the Philippines on Thursday are adding to the pressure to find pockets of resilience, after hotter-than-expected US inflation bolstered the case for faster Federal Reserve rate hikes.

Investors in Asia bonds have taken a buffeting in recent months amid escalating fund outflows and rising risk aversion. A Bloomberg index of the region’s dollar-denominated investment-grade debt has tumbled more than 10% this year, while another tracking emerging-market sovereign bonds has slumped around 16%.

There’s no single theme across Asia bonds that will shelter investors from the threats of inflation, slowing growth and tightening financial conditions, however there are some defensive strategies that will counter the growing risk of a global recession, Societe Generale SA analysts including Kiyong Seong in Hong Kong, wrote in a note this week.

Here are some of the investment strategies funds are pursuing:

One way to generate returns in the current market conditions is to put money into bonds with a high enough yield that will offset the increase in inflation.

“Some of the highest real-yield markets within the EM universe are in Asia,” said Eric Lo, a fixed-income fund manager in Hong Kong at Manulife Investment Management, which oversees the equivalent of $660 billion worldwide. “Regions like Latin America and EMEA are still experiencing elevated inflation as opposed to Asia.”

Two countries in the region that look the most attractive from a real-yield perspective are Indonesia and Malaysia, he said. 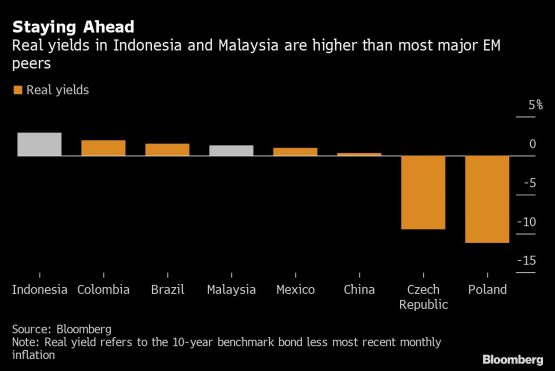 South Korea’s bonds are seen as another haven as the central bank has been ahead of its peers in raising interest rates, and the securities also have a relatively high correlation with more debt-friendly trends in global markets.

The Bank of Korea has raised its benchmark rate six times since August 2021, pushing up its benchmark to 2.25% on Wednesday to counter rising consumer prices. The annual inflation rate quickened to 6% in June from 5.4% the previous month, data showed last week.

Korean bonds are less vulnerable to higher inflation and rate hikes because the BOK has already been the most proactive in normalizing monetary policy in the region, said Prashant Singh, a senior fund manager for emerging-markets debt in Singapore at Neuberger Berman, which manages $447 billion globally.

The close correlation of Korean assets with global risk sentiment means the nation’s bonds may also be more open to declines in overseas yields during a global recession.

“Korean bonds could provide protection from global recession risks in Asia, as Korean rates are likely to react more to external headwinds than to Korea’s domestic dynamics,”Societe Generale money manager Seong and his colleagues wrote in their note.

“Among the emerging-market fixed income universe, Asia credit is the higher-quality segment with more attractive risk-adjusted returns,” said Sheldon Chan, a fund manager at T. Rowe Price Group Inc. in Hong Kong. The region has offered similar returns to US investment-grade credit in the last 10 years but with less volatility, and held up well during the peak of the pandemic in 2020, he said. 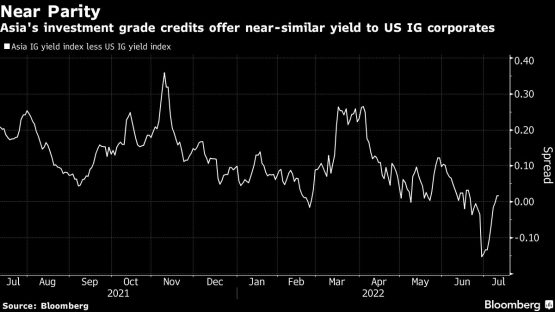 Even better if the investment-grade credit belongs to a company with operations in China due to that country’s relatively accommodative monetary policy, according to PineBridge Investments Asia Ltd.

“The credit spread premium of Asia investment-grade over US investment grade, which has narrowed noticeably recently may continue to compress given the supportive policy backdrop and growing recessionary risk concern in the US,” said Arthur E. Lau, co-head of emerging markets fixed income at PineBridge Investments in Hong Kong.