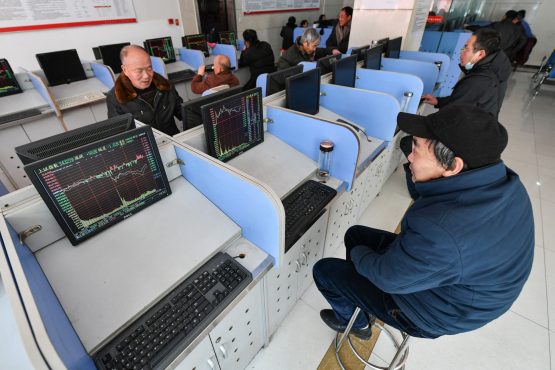 A selloff across Chinese equities deepened on Tuesday as concerns about the country’s ties with Russia and persistent regulatory pressure sent shares on a downward spiral.

The Hang Seng China Enterprises Index, which tracks Chinese shares listed in Hong Kong, sank 6.6%, following a plunge in the previous session that was the biggest since the global financial crisis. Tech giants Alibaba Group and Tencent led the decline.

China’s equities are looking increasingly risky on concerns that Beijing’s ties with Russia could spark new U.S. sanctions. That’s adding to worries from regulatory developments including a possible delisting from the U.S. exchanges. While upbeat economic data was a rare bright spot in the market, growing lockdowns in major Chinese cities are dimming the outlook.

“The selloff is overdone, but so is everything else,” said Andy Maynard, head of equities at China Renaissance Securities. “The market is crazy — there’s no fundamentals anymore. This might be worse than the 2008 financial crisis.” The Hang Seng Tech Index saw an intraday swing of 10 percentage points on Tuesday, the wildest ever since the gauge was launched in 2020, Bloomberg-compiled data show. The China tech gauge lost 8.1%, extending declines from a February 2021 peak to nearly 70%.

“When faith is gone, people are ready to see a dark shadow in everything, some are even suspicious of the solid economic figures today,” said Yu Yingbo, an investment director at Shenzhen Qianhai United Fortune Fund Management Co “It’s just a planned, persistent and synchronised selling.”

Tech rout
The selloff in Chinese equities has been especially severe in the tech sector. Already battered by Beijing’s yearlong regulatory crackdown and a looming Federal Reserve rate hike, sentiment toward Chinese tech had morphed into fear in recent days as investors turned their attention to the risk of sanctions should China offer aid to Russia for its war.

That triggered a 11% slump in the Hang Seng Tech Index on Monday, its worst daily drop since the gauge’s July 2020 inception. JPMorgan Chase & Co. analysts have even labeled some Chinese internet names as “uninvestable”.

On Tuesday, China’s foreign minister Wang Yi – in his most explicit statement yet on American penalties – said he wants the nation to avoid being impacted by U.S. sanctions over Russia’s war. That did little to calm markets, with China’s CSI 300 Index closing down 4.6%, the steepest since July 2020. The relentless rout has also pushed the valuation of MSCI China Index versus its global peers to a record low, suggesting some buyers may see current levels as too attractive to ignore. An exchange-traded fund tracking the Hang Seng tech gauge saw net inflows of HK$1.5 billion ($192 million) this month, set for the most since December.

Some in the market were disappointed early Tuesday as the People’s Bank of China held its interest rate on one-year policy loans steady. A majority of surveyed economists had expected a cut, given the dire state of financial markets and the economy. Instead, the PBOC added stimulus by injecting a net 100 billion yuan ($15.7 billion) of funds into the financial system, suggesting it wants to ease at a measured pace.

“We are underweight Chinese equities due to several factors,” said Cesar Perez Ruiz, chief investment officer of Pictet Wealth Management, citing the nation’s zero-Covid policy that’s affecting growth as one of the reasons.

“The tech sector will continue to suffer from regulation challenges plus the risk of U.S. delisting and penalisation of growth stocks as rates continue to normalise.”