South Africa’s rand and bonds gained in May — but there are signs that the picture is about to darken.

Large bond outflows and waning demand for the debt from domestic investors are putting pressure on the local market, with record fuel prices adding to inflation that’s already close to the central bank’s target range. Aggressive monetary tightening by developed-nation central banks could add to pressure on the rand.

The charts below show some of the challenges for South African bonds and the rand. Government rand bonds were the best-performing local debt in Africa in May, with a 2.5% return in dollar terms compared with the 0.6% drop of peers. But appetite for the debt is ebbing amid inflation pressures and rate-hike bets. Foreigners sold about R18 billion of government debt on a net basis last month, and are now net sellers of the debt this year, based on data from exchange operator the JSE Ltd. 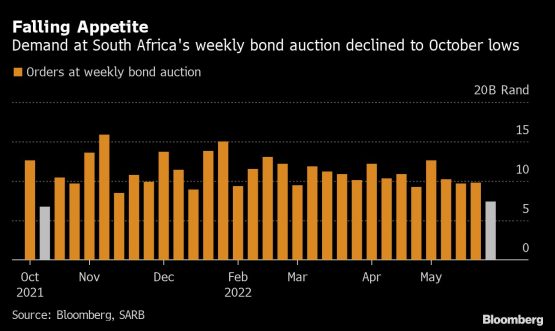 Demand from local investors underpinned bond gains in May, but that’s not a given, with this week’s Treasury auction raising a red flag. Primary dealers placed orders for just R7.4 billion of debt, or 1.9 times the R3.9 billion on sale.

That was the weakest demand since October, according to data compiled by Bloomberg. Africa’s most industrialised economy extended a fuel subsidy by two months to help cushion consumers and businesses against the impact of rising crude prices stemming from Russia’s war with Ukraine.

The additional relief will cost the state R4.5 billion in foregone revenue. While the initial concession was funded by selling part of South Africa’s strategic fuel stocks, the extension will have an impact on the national budget.

A deterioration in fiscal metrics may be reflected in the premium investors require to hold South African debt, as well as the performance of the currency.