European stocks bounced back from their biggest decline in six weeks as Treasury yields steadied a day before a key American inflation reading.

The moves reversed days of selling of pricey tech and high-growth stocks driven by bets the Federal Reserve will speed up the pace of monetary tightening. Wednesday’s report on US consumer-price inflation is set to be a further call to action for policy makers, with the rate anticipated to have increased further in December to 7.1%, the fastest pace in almost four decades.

“It’s very well embedded now that inflation in many parts of the world won’t be transitory, that there still are some supply-chain issues that will linger,” Kerry Craig, JPMorgan Asset Management global market strategist, said on Bloomberg Television. “That does mean central banks are pretty keen to get onto the tightening path.” 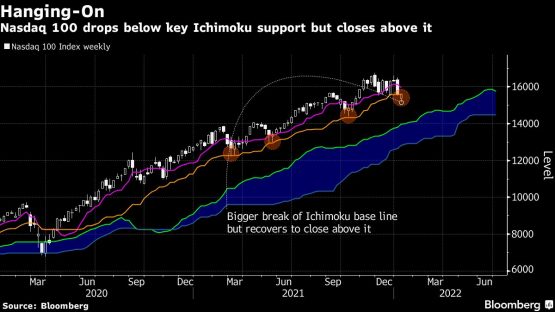 Swaps indicate the Fed’s target will be 88 basis points higher by the end of this year — seen by many as a sign the market is baking in three hikes, plus the possibility of a fourth — and momentum is building for the first increase to take place as soon as March.

Federal Reserve Chair Jerome Powell said the US economy was expanding at a fast pace and the central bank will prevent higher inflation from becoming entrenched. In remarks for his Senate confirmation hearing, he also cautioned that the post-pandemic economy might look different than the previous expansion.

Meanwhile, Covid-19 is ushering in fresh restrictions in China and Hong Kong, while Japan is extending its border measures until the end of February. Pfizer Inc. is developing a hybrid vaccine that shields against the omicron variant. A new study showed high levels of protective immune cells that fight some common colds also made people less likely to contract Covid-19.

Elsewhere, Bitcoin recovered to around $42 000 after dipping below $40 000, putting it on track for its worst start to a year since the earliest days of digital currencies. Oil edged up.

The world’s most important base-metals exchange resumed trading after a more-than five hour halt, although some brokers reported patchy access to electronic systems as the European trading day got underway.