Stocks headed higher and commodities extended their advance ahead of US jobs data that are expected to cap a series of strong economic reports this week. The dollar fluctuated.

Copper soared to an all-time record on expectations that rebounding economies will spur a boom in global demand, and the Bloomberg Commodity Spot Index jumped to its highest level since 2011. The Stoxx 600 Index rose 0.3% as Adidas AG and Credit Agricole SA reported strong quarterly results, while US equity futures were little changed.

Asian shares gained as China’s latest trade data showed exports rose well ahead of expectations and imports saw the fastest growth since 2011. Traders shrugged off news overnight that the Biden administration is likely to preserve limits on US investments in certain Chinese companies.

After applications for US state unemployment insurance fell to a fresh pandemic low, and separate data showed a rebound in productivity, traders now turn to Friday’s payrolls numbers, which expected to show a million jobs added in April. Treasuries were steady. 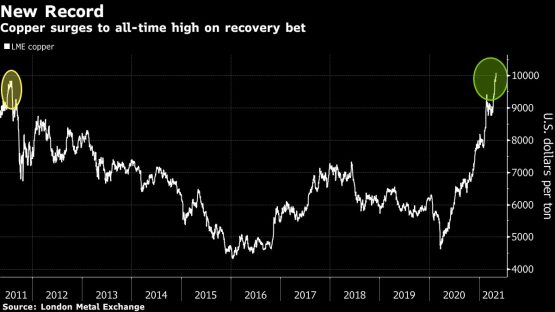 Investors are focusing on strengthening growth in the world’s largest economies, shaking off concerns for now that a faster-than-expected rebound could spur excessive inflation. The Federal Reserve remains committed to near-zero interest rates to bring about a full recovery, though an announcement of a pullback in its heavy monthly bond purchases seems increasingly likely in the second half of this year.

“Most of the developed markets are going to treat the spike in inflation as transitory unless they start to see significant pass-through of commodity prices and wage inflation,” Binay Chandgothia, portfolio manager at Principal Global Investors, said on Bloomberg TV.

Increased attention to stretched valuations could spur more talk of the Fed adjusting policy. The central bank’s semi-annual financial stability report noted rising appetite for risk across a variety of asset markets could exacerbate vulnerabilities in the US financial system.