Most Asian stocks fell Monday while US and European equity futures were mixed as traders weighed the likely market impact of Federal Reserve monetary-policy tightening.

Technology stocks in Hong Kong retreated, shares eked out gains in Japan and European futures declined. Still, an advance in S&P 500 and Nasdaq 100 contracts stirred tentative hopes of some respite after one of the worst stretches for global shares last week since the pandemic began.

The Fed on Wednesday is expected to signal a March liftoff in interest rates and balance-sheet reduction later this year to help fight inflation. Ebbing stimulus is forcing a rethink about the economic and market outlook.

How the policy shift will affect fixed income is among the key questions. The Treasury yield curve flattened and the 10-year yield held at about 1.76%. A dollar gauge ticked up. 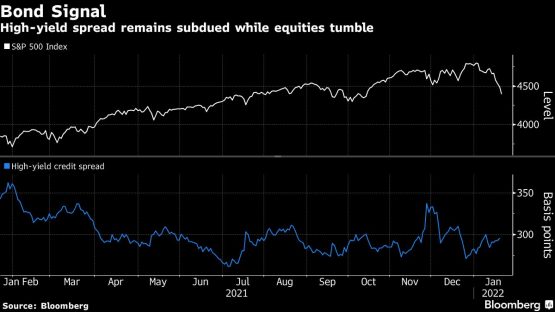 Aside from the Fed, earnings updates from titans such as Apple Inc. will shape sentiment too in the days to come following an uneven start to the reporting season. Tech stocks have borne the brunt of an equity selloff this year, while some less richly valued parts of the market have held up better.

There is “likely a longer term rotation toward value stocks measured in quarters, not weeks” unfolding, Julian Emanuel, chief equity and quantitative strategist at Evercore ISI, wrote in a note. He added “investors should retain a balanced view, staying patient in committing new capital to equities.”

A less accommodative Fed is among the reasons why “you have a re-rating going on and certainly a bit of a — excuse the term — puking of some of the higher spec, lower quality segments of the market,” Liz Ann Sonders, chief investment strategist at Charles Schwab & Co., said on Bloomberg Television.

In the volatile cryptocurrency sector, bruised Bitcoin stabilised around $35 000 in the wake of a plunge over the past three days. Digital coins have shed more than $1 trillion in value since a November high.

Elsewhere, a commodities gauge remains near a record level, powered in part by a rally in oil that’s helping to stoke global price pressures.

Meanwhile, traders are monitoring US-Russia tension over Ukraine. Russia is continuing a military buildup near the Ukrainian border but denies that it’s planning a further invasion of the nation. The US ordered family members at its embassy in Kyiv to leave Ukraine.