Traders see more currency volatility no matter what Omicron does

Traders are betting that gyrations in foreign-exchange markets will likely last well into next year.
By Robert Fullem, Bloomberg 15 Dec 2021  07:37 Volatility traders are betting that gyrations in foreign-exchange markets will likely last well into next year — even if fears of the omicron Covid variant subside.

Realised currency volatility in the Bloomberg Dollar Spot Index is near a six-month high as uncertainty about the latest mutation’s virulence causes outsized swings during what’s typically a quiet last month of the year. Meanwhile, several currency pairs have posted their largest daily swings in months — including a 1.7% drop in dollar-yen, a 2.1% surge in the euro versus the Canadian dollar, 1.8% swings in the euro against the Swedish krona and a 1.3% drop in the Australian dollar.

While fluctuations may have been exacerbated by profit-taking ahead of year-end, and markets have calmed this week before a swath of central bank meetings, concerns about how these monetary authorities will balance inflation risks with the potential threat from rising virus cases are evident. A gauge of implied volatility in the Bloomberg dollar gauge is close to a nine-month high ahead of Wednesday’s Federal Reserve policy announcement. Meanwhile, the cost to hedge the pound and euro hovers near a year-to-date high. 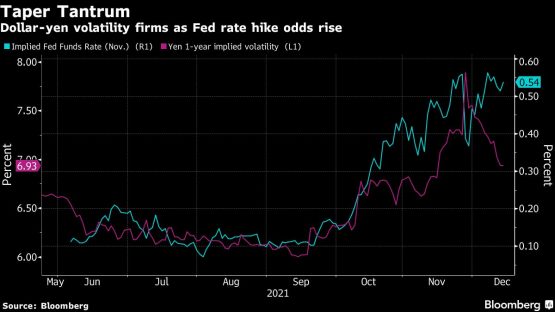 That’s because these concerns have been building over time. Before omicron emerged, currency traders were positioning for a rocky start to the new year courtesy of the Fed, buying longer-dated options in currencies sensitive to Treasury market movements and higher interest rates.

One-year yen volatility bottomed in the second week of September, with hedging costs rising incrementally alongside Fed rate-hike expectations. And, in October, three-month volatility in the Japanese currency — often viewed as a haven — moved above JPMorgan Chase & Co.’s broader G-7 volatility index for the first time in over a year, a sign that market complacency was waning. 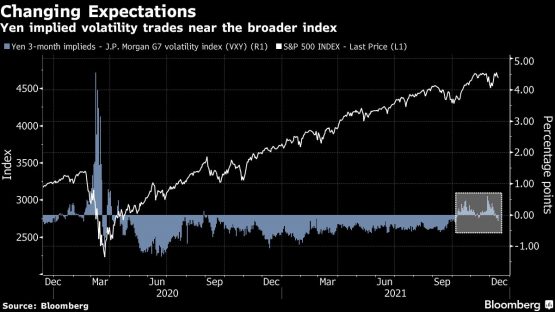 Meanwhile, demand for longer-dated options has seen the U.S. dollar’s implied curve steepen, a contrast to the last three years when its steepness was mostly driven by falling volatility at the short-end amid depressed overall action. These buyers should remain due to attractive options prices; the volatility level from which prices are derived is below the median of the past five years and 3% below those seen in 2016.

A further layer of demand was added at the end of November when omicron’s spread sparked a significant rise in appetite for yen call options. That jolt also turned the correlation between the ICE dollar index and S&P 500 Index to positive for the first time since April 2020, a sign that further greenback strength will be contingent on a resilient US equity market. Additional demand for haven currency calls would suggest volatility is becoming contagious. To be sure, US financial conditions remain accommodative and inflation may recede as bottlenecks ease. But currency traders are preparing for fireworks as they head into 2022.