Trying to make sense of the market routing Yesterday the JSE All Share Index fell a whopping 2.7%, closing below 50 000 points for the 1st time since January. From the high on April 24 our market is down nearly 9%, very close to the 11% correction we had in October last year. To put it into perspective though, the Index is still up slightly for the year to date.

What caused this? Like all global markets we are affected by the Grexit problems. Looking at a Greece exit soberly, the direct effect on the world economy will be small, even for Europe. The biggest fear is contagion to some of the other weak economies in Europe. Will Spain, Portugal, Italy and Ireland be enticed to follow the same road? In 2011 this was a very real possibility as all of them were on the brink of collapse. Now these economies are on a much stronger footing as reflected by their Bond yields. There is only a small chance they will opt for exit. In my opinion most of Grexit is already priced in the market.

The Shanghai A Share Index was up 150% at its peak in June, with P/E ratios going from 9 to 26 in a year. This was mostly driven by a flood of new retail speculators, there was even a nine year old boy speculating.

This “irrational exuberance”, to quote Alan Greenspan, had to burst. So the Chinese market fell 45% from its high and is still up 80% from June last year, further downside is likely.

However, global markets were mostly unaffected by the massive increase and should really not be affected by this downturn, shaking out the irrational speculators.

This proved so true in 1998 when the Bond market experienced a routing with yields going from 13% to 16% in weeks as a result of the Russian and Asian crises. The JSE All Share Index was not down by much. The Bond market proved correct when the JSE subsequently declined by more than 40%. If there is serious trouble the Bond market will show you.

Throughout the last few weeks of stockmarket turmoil, global Bond yields did not move much.

The graph shows a very stable sideways movement in June and July for our All Bond Index yield while the All Share Index fell in a heap. I am of the opinion that the equity markets will recover quite quickly once the overly negative sentiment stabilises.

I will get very worried if Bond yields start shooting up, only time will tell. 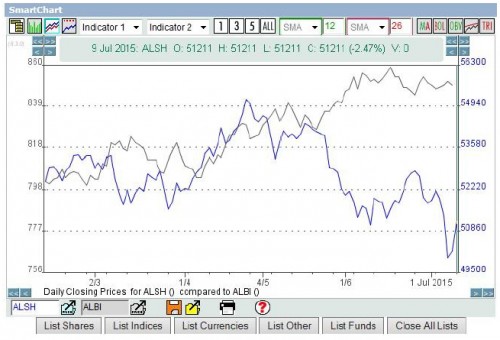