The investment-banking bonanza is only just beginning.

Wall Street’s five largest lenders generated a record $55 billion in revenue last year from putting together stock and bond offerings, as well as advising corporations on mergers and acquisitions. That was up 40% from 2020, aided by the slew of takeovers and initial public offerings for special purpose acquisition companies.

Bankers aren’t done: executives emphasised on conference calls with analysts that they expect even more dealmaking to get done this year. Goldman Sachs Group’s leaders pointed to recent disruptions to corporate supply chains, saying that companies are being forced to consider more acquisitions to achieve greater scale.

“Both from a backlog perspective and real-time activity, and just getting around with CEOs broadly, we think there is a good tailwind for continued M&A activity,” Goldman chief executive officer David Solomon told analysts this week. “The uncertainty in the environment interestingly is actually helping that tailwind, because it’s forcing people to look hard at ways they can strengthen their competitive position.” 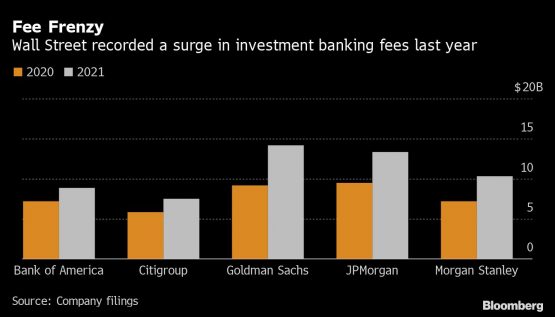 The investment-banking boom helped buoy revenue in a year when loan growth largely remained elusive, crimping net interest income across the finance industry. Many firms also contended with rising costs as the ongoing war for talent forced companies to dole out more in compensation.

Here’s a look at some of the other big trends from the final three months of the year:

Total loans inched up at the four largest U.S. banks during the quarter. Still, net interest income dropped by a whopping $9 billion for the year across the group — Bank of America, Citigroup, JPMorgan Chase & Co and Wells Fargo & Co.

The companies continued to be plagued by the fact that consumers have largely kept up with their credit-card bills during the pandemic, thanks to the massive amount of stimulus the federal government pumped into the economy. As consumers continue to chew through those payments, bank executives were hopeful borrowing would return to normal levels. JPMorgan — which surpassed Citigroup as the world’s largest credit-card issuer in the fourth quarter — is banking on card customers resuming their normal activity as the lender seeks to increase net interest income by more than $5 billion this year.

“The big surprise as we emerge from the worst moments of the pandemic was the lower level of card revolve,” JPMorgan chief financial officer Jeremy Barnum said late last week. “It’s promising to see that while revolving balances bottomed in May of 2021, since then they’ve kept pace with 2019 growth rates.”

As part of their push to boost borrowing — and spending — on their credit cards, many banks are once again on the prowl for new customers after largely curtailing such activity during the early days of Covid-19.

Citigroup, Bank of America and Wells Fargo all reported a surge in new card accounts in the last three months of the year, when they ramped up marketing for newly introduced products. JPMorgan said it returned to offering 100 000-point sign-up bonuses.

“We are seeing encouraging underlying drivers, with new accounts up 43%,” Citigroup chief financial officer Mark Mason told analysts this week. “In fact, the fourth-quarter acquisitions exceeded the same quarter in 2019 by 2%, the first quarter to do so since the onset of the pandemic.”

Lenders’ efforts to gin up more revenue from their card portfolios come as overall spending on both credit and debit cards soared over the course of 2021. Consumers returned to traveling and dining out before the the highly contagious omicron variant emerged at the end of the year.

Banks have warned for months they wouldn’t be able to continue the pandemic-induced highs of 2020 in their trading businesses. Those predictions largely panned out: Wall Street’s five biggest banks saw their combined trading haul drop by a whopping 5.8%, to $101 billion, in 2021, the first decline in four years.

With central banks around the world moving quickly to introduce new monetary and fiscal policy measures to fight inflation, many firms see an opportunity for the overall industry wallet for trading revenue to grow again.

“Obviously none of us have a crystal ball — I think right now what we do know is activity is high,” Morgan Stanley chief financial officer Sharon Yeshaya told analysts Wednesday. “As you inject rates rising, one should expect different types of volatility and different diversification amongst products, which could contribute to a bigger or a different type of wallet.”

Expenses soared across the industry in the final three months of the year, driven up by rising compensation costs. Amid inflation, increased competition and a tight labor market, banks have been forced to add to their ranks of coders, sweeten payouts for bankers and boost salaries at every level. 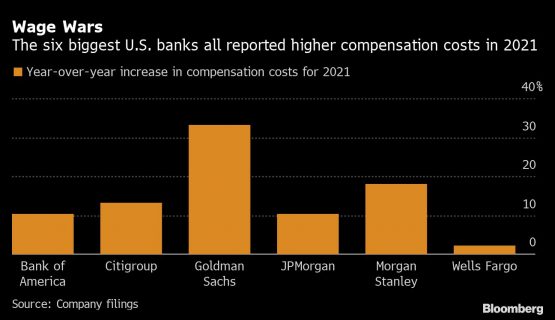 The six biggest US banks set aside $177.7 billion to compensate workers in 2021, a 12% increase from a year earlier, when profits were hurt by the early days of the pandemic. Last year’s higher payouts pushed the group’s overall costs above $300 billion for the first time.

“With regard to expenses, our revenue-related costs increased,” Bank of America chief financial officer Alastair Borthwick told analysts Wednesday. “And we continue to make investments in our people.”