Was the coronavirus crash really a black swan? 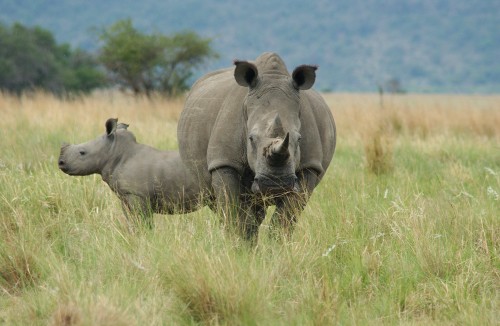 What makes grey rhinos fundamentally different from black swans is that you can see them coming. And that gives you the opportunity to respond. Image: Peter Oberem via Bloomberg

The Covid-19 pandemic has been widely referred to as a ‘black swan event’. This is a term coined by Nassim Taleb to describe extremely rare and unpredictable disruptions with potentially catastrophic effects.

There is however good reason to argue that the emergence of the coronavirus and its impacts were neither unexpected nor improbable.

“It was not a black swan that you wake up one morning to find sitting in your swimming pool,” says Rob Spanjaard, chief investment officer at Rezco Asset Management. “If you look at the timeline, from January 23 when the city of Wuhan was placed in total lockdown, you could see this rolling in. It was slow-moving but very predictable.”

Spanjaard believes that the coronavirus and the market reaction to it is more aptly described as a ‘grey rhino’. Michele Wucker, an American policy analyst, came up with this term in 2016 to describe events that are highly probable, have a high impact, but are neglected threats.

The reality is that healthcare experts have been warning about the risk of a global viral outbreak for more than a decade.

The arrival of one can therefore hardly be seen as unpredictable.

As Wucker herself wrote recently: “Given what we know about pandemics and their increased likelihood, outbreaks are highly probable and high impact. I coined the term ‘grey rhino’ for exactly such events: obvious, visible, coming right at you, with large potential impact and highly probable consequences.”

So once news of the impact that Covid-19 was having in China began to make global headlines, the risk was clearly apparent.

“We were not privy to some information that nobody else had,” Spanjaard notes. “Prominent virologists were saying that this is going to be a problem – that 70% of the world’s population could contract the disease and that it could kill a lot of people.”

Getting out of the way

This highlights what makes grey rhinos fundamentally different from black swans: you can see them coming. And that gives you the opportunity to respond.

“It has to be part of your risk process that you appreciate that there are extraneous risks out there that can take out your clients,” Spanjaard says. “Once you saw what happened in Wuhan, you only had to do the maths on what would happen when you lock down New York or London to have a sense of where equity markets could go.”

This gave active asset allocators the chance to prepare their portfolios.

“If you are living in the world where you are an active manager, managing risk when you see a grey rhino coming, you take evasive action,” says Spanjaard. “You have some time to get out of the way.”

In equity funds, this means moving as much into cash as is allowed, and re-allocating money to stocks that are going to be less impacted by a sell-off. In multi-asset portfolios where managers can be more flexible, it means shifting towards more defensive assets.

Most swans are larger and greyer than you think

Managers who were proactive in this way were able to protect a lot of their clients’ capital. They avoided the substantial losses that were suffered by others who remained largely invested in the stock market.

For Spanjaard, this is what true active asset allocators should be offering their clients. Particularly because often the big risks are more visible than the industry likes to make out.

“I think Nassim Taleb did everyone a favour and a disservice by coming up with the idea of black swans,” Spanjaard says. “It gave asset managers a nice label that they can use as a reason for not taking any action. It has become a law of the world that these things happen and you can’t predict them, and so there’s no point in trying. But that doesn’t fit the facts of the big recent cracks.”

Even the great financial crisis, which for many is considered the ultimate black swan event, was not unforeseen.

“The sub-prime crisis and the US housing bubble were percolating for quite a while,” Spanjaard points out. “The crisis didn’t just come from nowhere.”

Seeing these events coming is, however, only half of the challenge. Successfully avoiding them protects capital in the short term, but you have to know when the grey rhino has passed and it’s time to start taking a risk again in order to ensure long term performance.

“The environment we’re in now is tricky,” Spanjaard acknowledges. “It’s too cheap to sell, but it’s not cheap enough to buy.”

He argues that investors shouldn’t make the mistake of comparing current market prices to what they were in January and thinking that just because they are now 20% lower that means that they are offering value.

“You have to stick to disciplined bottom-up investing,” Spanjaard says. “There will be companies with sound capital structures that have taken a hit and will be dirt cheap. You will be amazed that the market is giving you such great value. But I don’t think we’re there yet.”

Brought to you by Rezco Asset Management.