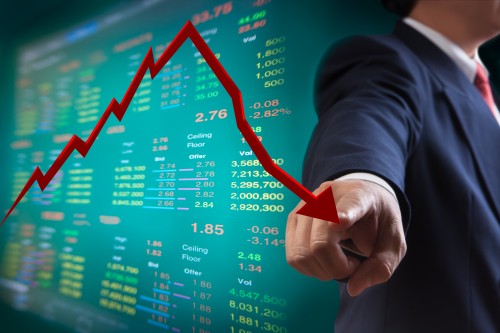 South African markets were thrown into turmoil after President Jacob Zuma fired the finance minister, strengthening his grip on power amid differences over government spending.

The rand weakened for a sixth day in the longest streak of losses since November 2013 and bond prices dropped the most on record, pushing yields to their highest levels since July 2008. The country’s bank stocks tumbled the most in more than 14 years following the dismissal late on Wednesday of Finance Minister Nhlanhla Nene. The cost of insuring South African debt against default rose to the highest in more than 6 1/2 years.

The demise of Nene, who was pushing the government to contain spending, comes as South Africa’s $350 billion economy faces a credit downgrade to junk, the slowest expansion since the 2009 recession and rising debt levels. To add to the uncertainty, Zuma chose as his replacement David Van Rooyen, a little-known lawmaker who investors say is unlikely to oppose the president’s plans to push ahead with proposals to build a nuclear power industry and bailout the state-owned airline.

“We see the risk of consistent portfolio outflows as well as an increased risk of more rating downgrades,” Barclays Africa Group analysts including Peter Worthington, Miyelani Maluleke and Mike Keenan wrote in an e-mailed note. “Markets are interpreting the cabinet reshuffle as a blow to the institutional credibility of the National Treasury.”

The currency dropped 1.9% to 15.2563 per dollar by 3pm in Johannesburg on Thursday, the most among 31 major and emerging-market currencies tracked by Bloomberg. It had weakened to an all-time low of 15.3857 in overnight trading on Wednesday before paring some of its losses. Yields on rand-denominated debt due December 2026 jumped 141 basis points to 10.23%, the highest since July 2008.

On the stock exchange, almost three shares fell for every one that gained on the benchmark equity gauge, with banks, insurers, retailers and property companies weighing the most on the FTSE/JSE Africa All Share Index. The FTSE/JSE Africa Banks Index dropped 12%, the most since October 2001. FirstRand declined 13%, Barclays Group Africa and Standard Bank Group plunged about 12% and Old Mutual’s Nedbank Group slid 10%.

“Banking stocks are being hit hard because of the massively weaker currency,” Bruce Main, a money manager at Ivy Asset Management in Johannesburg, said by phone. “It increases the risk of bad debts rising. The president has done damage to investor confidence. If the rand continues to be pounded by outrageous policy decisions it will lead to lower business confidence, less employment and stagflation.”

Five-year credit-default swaps on South African debt rose to the highest premium over similar contracts for junk-rated Russia — which is tackling a recession, involvement in two conflicts and international sanctions — since February 2014. The contracts, which investors use to insure against non-payment for the period, climbed 39 basis points to 328, the highest level since April 2009.

“Zuma’s timing could not have been worse,” Peter Kinsella, the London-based head of emerging-market and economic and foreign-exchange research at Commerzbank, said in a note. “Zuma gave the rating agencies the perfect justification for further downgrades and the loss of investment grade status.”

Nene was removed from his position after 19 months and ahead of his “deployment to another strategic position,” Zuma said in an e-mailed statement on Wednesday, without providing more detail. Van Rooyen has served as a parliamentary member on committees for finance and economic transformation.

On December 4, Fitch Ratings cut the country’s credit rating to BBB-, one level above non-investment grade, while Standard and Poor’s lowered the outlook on its equivalent rating to negative, bringing the nation a step closer to junk status.

“This is a big negative, especially because Nene was seen as someone who was moving in the right direction,” Ilke van Zyl, an economist at FirstRand’s Johannesburg-based investment banking unit, said by phone. “Because we don’t know the new man and we all have to get to know him now, and we are already at a very sensitive point in the projections of our fiscal position, we think this is a negative.”

Hallo Zuma
Are you still not able to give the public a reason why
you fired Nene -I suppose you need some time to think up something which you feel will disguise the truth .

Nene looked like a very good resource.
We need more people like Nene to help build the country.
When are we Firing Mr. Zuma?
I think the whole of South Africa is fed up with him.
The worst President in our history, is he is destroying South Africa due to the lack of intelligence/experience/education OR to help someone buy the JSE/South Africa for 10% of the worth?
???

2016
====
Pensions and Providend funds wiped out.
Fuel, sky rockets.
Super Inflation.
The rich and middle class gets upset but makes it.
The POOR go very hungry and we the Rich, the Middle and Poor
overthrow Mr. Zuma