Reports of a third fatality. M&R says causes have not been identified.
By Antoinette Slabbert 14 Oct 2015  23:53 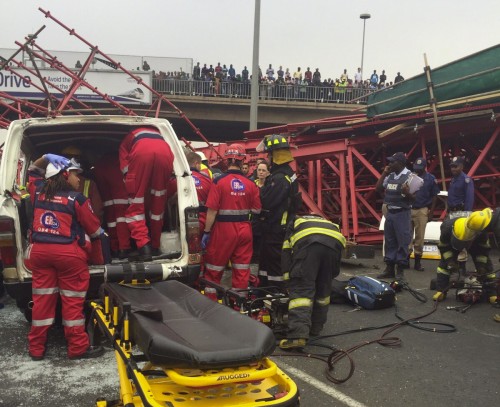 Construction company Murray & Roberts (M&R) will on Thursday face close scrutiny after the collapse of a pedestrian bridge it was constructing on the M1 in Johannesburg, close to Grayston Drive, the day before. According to news reports on Thursday, a third person has died. More than 20 people were injured.

This comes at a time when trust in the construction industry from government, the industry’s major client, is at a very low level following the earlier 2010 World Cup stadia collusion scandal.

Immediately after the incident on Wednesday afternoon the company’s share price dropped sharply by 7.32% to R11.15, leaving it 48.37% lower than a year ago.

The share price is currently 75% lower than five years ago, reflecting the effect of huge claims, some of which have not yet been concluded and the fall-out of being fined by the Competition Tribunal for collusion over several years. While the company successfully implemented its turnaround and became profitable again the share price has been slow to recover and is currently at its lowest level in four years.

On Thursday morning, M&R issued a Sens saying it offers its sincere condolences to the families of the deceased and sympathy
to those injured. “We sincerely thank the Johannesburg emergency services and reaction teams who are still working tirelessly. We are encouraged by the support we have received from so many people, partners, associates and suppliers. We are working with the authorities to reach the affected families to establish what support we can provide.

“The cause of the incident has not yet been determined and the Company is working closely with the relevant authorities on the investigation.”

In a second statement, responding to “various statements attributed to the company which speculate over the cause, or causes, of the incident.” M&R said it “can confirm that it has made no such claims, that the cause, or causes, have not been identified and that all possible causes are the subject of formal investigation.

“Our immediate priorities are to make contact with [and assist] the families of those affected and to ensure they are being taken care of and to clear the scene so that motorists in Johannesburg are able to commute. Senior directors of Murray & Roberts, including its Group CEO Henry Lass, have been on site assisting with rescue and clearing operations since the incident occurred on Wednesday.

“The company is working closely with the City of Joburg and all emergency services and early estimates indicate that the N1 will be cleared today.”

M&R released four short statements during the course of Wednesday night, confirming the incident saying its incident response procedures had been initiated and emergency services were on site, later confirming that (then) two people had died, that the cause of the incident had not yet been determined and senior directors of M&R were on the scene, assisting officials of the City of Joburg and emergency services.

On Wednesday, Trade union federation Cosatu expressed its shock and sadness over the incident. It demanded a “thorough and transparent investigation” and for “the responsible parties held accountable, if any wrongdoing is found.”

The Department of Labour was already on the scene on Wednesday night and Mayor Parks Tau (also onsite) announced that the City of Joburg had appointed independent engineers to conduct an investigation on its behalf. This has to be concluded as soon as possible, he said.

The Engineering Council of South Africa (Ecsa) is also expected to investigate the cause of the collapse.

Tau and the City of Joburg, on the other hand, were praised for swift and efficient action. When it became clear that the highway would most probably remain closed on Thursday, the City quickly started communicating about measures to mitigate expected traffic problems in and around the Sandton area.

Motorists were requested to use park and ride facilities that were opened for the Sandton ecomobility festival. The City also announced that Metrobus services would be increased for Thursday and fees would be scrapped on the park and rides and Gautrain and Putco busses would be free on certain routes. It further announced that JMPD would deploy pointsmen on alternative routes.

Cosatu said it is disturbing to witness that construction accidents are becoming far too common and the health and safety standards in the construction industry are deteriorating.

“While this is a tragic accident and we are wary of jumping to conclusions, we cannot help but be cynical about the role of the construction company in this whole affair. The construction companies have much to answer for with their greedy drive for profit maximisation. Their reckless actions have left many workers and citizens exposed, because of their failure to adhere to health and safety standards,” Cosatu said.

“This tragedy should be a siren call to the regulators and the Department of Labour that tells them that things need to change.”

Isn’t so predictable, as soon as there’s a private company involved there’s always an immediate need for an investigation together with the grandstanding by cusato with its political aspirations, and the media regurgitating enausating repeat of the same old competition commission stories over and over again and over again. Suppose if it was all up to them M&R would have been found guilty while the dust was still settling.

Cosatu as usual grand standing pointing fingers re: profit etc etc. Remember this is one of the companies that built some huge structures in Dubai. They are not kids playing meccano. What will Cosatu say if one of their members is found to be the guy that did not tighten something or left a bolt out? Bet you it won’t be their fault, they are never accountable for anything.

“This tragedy should be a siren call to the regulators and the Department of Labour that tells them that things need to change.”

can someone please brief our friends at COSATU as to what a “siren call” actually is ?