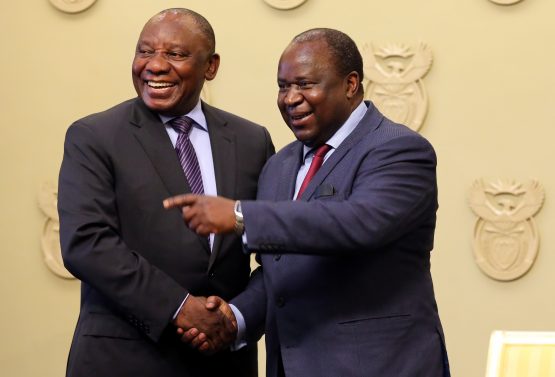 The starting rand/US dollar exchange rate for 2018. It peaked around R15.60 after the release of GDP growth figures in the second quarter, indicating a recession. The rate now sits closer to R14.17.

The year-to-date decline in the local stock exchange’s All-Share Index (Alsi). We’re on track to see the lowest annual return in the last nine years. Yikes. The year-to-date return of our local stock exchange’s biggest winner, Sabvest. Sabvest has significant interests in five unlisted industrial groups, long-term direct and indirect holdings in eight listed investments, and equity funds. We wouldn’t mind being on the receiving end of one of its Christmas bonuses this year.

The highest year-to-date return across all global stock exchanges. The exchange in question covers the Ukrainian market. (The value above is calculated after converting its local price levels to rands.) Second place went to the Macedonian Stock exchange at ~43%.

The number of finance ministers South Africa has had in 2018. We started the year with Malusi Gigaba, switched to Nhlanhla Nene and we’re now being steered by Tito Mboweni. Mboweni finds himself battling rampant unemployment and slow economic growth. His focus now is getting SA back to investment grade in order to bring more funding into the country.

The decline this year in the rand/bitcoin price per luno. Bitcoin has fallen from grace as investors realised that use cases were slower to materialise and regulatory challenges could limit its future impact.

The difference between the year’s opening fuel price and its peak in October. Fortunately, the petrol price has recently become more affordable. The difference now sits at ~5%.

The increase in pay that government ministers will be receiving. South African President Cyril Ramaphosa rejected a recommendation for a 4% increase in their salaries. His spokesperson had the following to say:

“The state [must] be considerate, responsive and demonstrate restraint, especially during periods of economic hardship, when determining the level of salary increases for public representatives.”

Tito is a clown. Following him on Twitter has given me nightmares. We need a real finance minister in 2019.