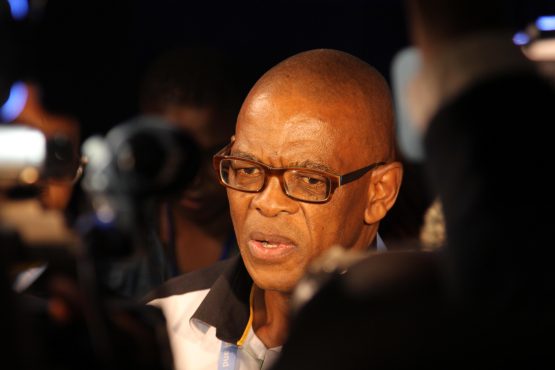 South African prosecutors said a top ruling party official and 15 other defendants have been charged with 74 crimes, including money laundering, fraud and corruption, adding to previous accusations levelled against them.

The revised indictment was served on African National Congress Secretary-General Ace Magashule and his co-accused during a second appearance at a magistrate’s court in the central city of Bloemfontein on Friday. Magashule denies any wrongdoing.

Ten other individuals and five companies are co-accused in the case, which relates to an audit contract issued while Magashule was premier of the central Free State province. The trial was transferred to the High Court and postponed until August 11. All the accused were freed on R50 000 bail.

Magashule, 61, is one of President Cyril Ramaphosa’s biggest rivals and has consistently undermined his authority. He’s been linked to an ANC faction that remains loyal to former President Jacob Zuma and opposes economic reforms that his successor is trying to implement.

The ANC has asked Magashule to step down while he fights the charges — a call he’s defied, undermining Ramaphosa’s efforts to weed out corruption in the ruling party.

You are going to need a bigger jail

Seeing Magashule leaving the court surrounded and protected by some uniformed bodyguards brought to mind similar images of warlords parading the streets in places like Uganda, CAR and a few others.

This does not bode well for the future.Not to mention that after an interlude at the High Court, this will drag on to the Supreme Court of Appeal and then the Constitutional Court in the far distant future.

This image of Dear Ace and his mindless supporters is chilling and is guarenteed to give investors in SA caution.

The “SHOULD” be the same for every South African else every citizen can do the same what ACE and ZUMA have done!