Amcu issues stern warning to corporates that ‘steal from workers’

The union has launched a theft and profit-shifting case against chrome miner Samancor.
By Tebogo Tshwane 10 Oct 2019  00:14 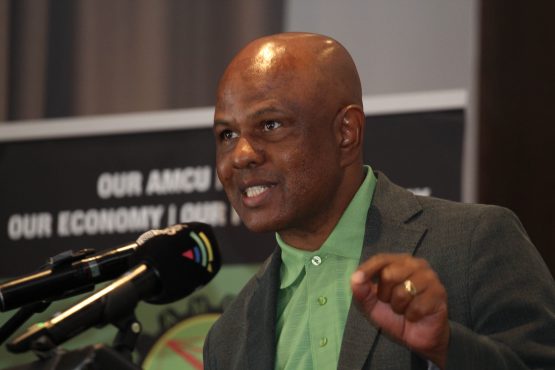 Amcu president Joseph Mathunjwa says the case against Samancor has been three years in the making. Samancor views allegations as ‘malicious and opportunistic’. Image: Moneyweb

As the Association of Mineworkers and Construction Union (Amcu) gears up to take on Samancor Chrome on behalf of workers, the union’s president Joseph Mathunjwa has issued out a warning against multinational companies that “steal worker’s money”.

Mathunjwa also told journalists on Thursday to watch this space as the union is “dealing” with two big companies in the gold sector.

Mathunjwa was speaking at a joint media briefing that the union and its partners Richard Spoor Attorneys and the Alternative Information and Development Centre (AIDC) held at the Hyatt Regency Hotel in Rosebank.

The parties outlined the estimated $1.9 billion theft and profit shifting case against Samancor and its directors, including former chair Danko Končar and chief executive Jürgen Schalamon.

Mathunjwa would not go into detail on the nature of probe into the two gold mining companies but said it would not be limited to matters of fraud and profit shifting; it would also involve an assessment of the employee stock ownership plans in these companies.

Mathunjwa said the current case against Samancor has been three years in the making and was prompted by the union detecting low returns for Samancor’s minority shareholder, the Ndizani Workers’ Trust, the employees share ownership scheme.

Mathunjwa said the union began to have suspicions after Samancor resisted Amcu’s attempts to obtain recognition as a trade union at the mine despite proving that it had representation. This went on for almost five years.

“This is when we started digging deeper,” said Mathunjwa.

Amcu enlisted the assistance of the AIDC but it wasn’t until the union received information from a “key whistleblower” – which the amaBhungane Centre for Investigative Journalism names as Miodrag Kon, a former director at Samancor – that it was able to confirm that the “suspicions were likely true and billions of workers’ hard-earned money is allegedly being stolen”.

Some of the key accusations Amcu is placing against Samancor include:

Amcu’s attorney Richard Spoor said they are seeking a court order to compel Samancor, which is a private company, to produce accounting for a number of transactions which they say constituted a fraud of minority shareholders.

“It was a scheme whereby money that should have accrued to local shareholders [was] channelled out of the country,” said Spoor.

Spoor said once they have the accounting and have analysed the financial flows they will follow up with a trial action where they will seek relief and the appointment of independent directors at Samancor. In addition they will ask for certain agreements that they allege are illicit and prejudicial to minority shareholders to be set aside.

They also want the court to make an order on compensation under the provisions of section 163 of the Company’s Act to the Ndizani Workers’ Trust. Spoor added that there will be a request to the court to compensate the whistleblower.

In a statement released on Thursday afternoon, Samancor said it had taken legal advice on the allegations made by Amcu “with the assistance of the so-called ‘brave whistleblower’ who is requesting compensation”.

“Samancor views this as malicious and opportunistic,” it said.

The chrome mine said that its board and the recognised unions had decided to commission an independent investigation into the allegations raised, highlighting that Amcu was not one of these unions “despite several failed attempts”.

If memory serves correct AMCU tried the same trick with Lonmin in 2015 stating that millions were siphoned to an offshore account. Those allogations fizzled out eventually, quietly…

South Africa can either have a successful economy, or it can have the ANC government and these useless, militant unions. Unfortunately for us, there is no Maggie Thatcher waiting in the wings to destroy these parasites.

The greed of the unions are the prime cause of unemployment in most of the formal sectors.

It is becoming more pointless every day reading and commenting to articles like this about fools.

The tripartite alliance, and its support for, and protection of militant labour unions create a monopoly in the labour market that inflates the cost of labour to such a level that labour becomes unaffordable. This means, in effect, that the tripartite alliance creates a barrier-to-entry into the labour market. Militant labour unions use violence and extortion as a mechanism to enforce these exclusive priveledges they receive from Luthuli House.

The union members are the wealthy elite in South Africa who treat the unemployed masses with total disdain. Labour Unions create a new system of apartheid, a new system of haves and have-nots and a new abusive class system.

In short, Luthuli House creates unemployment, poverty and anarchy in South Africa, while it creates job opportunities, wealth and stability in the countries that compete with us.

Our government loves monopolies for itself while it deplores so called white monopoly capital.

And it extends the joys of monopoly operations
to its voter base by creating a false monopoly price for unionized labour.

And the results are, as you’ve pointed out, the world’s highest unemployment figures.

You’d think this dismal statistic might prompt the ruling party to ask a simple question…. why?

But this is not a word in their vocabulary when the obvious answer is Jan van Riebeeck.

Why does unions like Amcu not have secret ballots?

When are we going to see the Amcu financial statements?

Why is the Competition Commission not investigating the union’s monopoly on labour?

Joseph Mathunjwa-the heartfelt union capitalist that lives in about 8 luxury estates (Lombardy Pretoria East for one) as he flirts from one meeting to another in convoy – living a truly down-trodden life!

Must be a very lucrative business being in charge of a union – hard work attending meetings and networking all day!

AMCU and other Unions have killed the investment climate in a country that should be BOOMING with current commodity prices. They should be reduced to regulatory administrators and not enemies of capitalism. The majority of the workers they represent are ignorant and scared to leave them. The intimidation they peddle should be a criminal offence. The only way SA will create jobs is for the labor market to be deregulated and unions eliminated – Period!! There are MILLIONS of people out of work that will be happy to work on different terms to those these charlatans try and sell! Start a church Joseph and close AMCU down!

I will go a little against the grain of most of the comments although I agree that the unions are run by self interest and, like the ANC, in a confrontational and negative way to business.

But strikes me that there seems to be something smelly about the Samancor operations.

Tend to agree – purely on the basis that Richard Spoor is involved in this investigation.

Where there is smoke, there is fire?

Must say, he has a nicely oiled skull. Probably the reason for common sense to slip his mind….

People are bored of age-old excuse blaming the Guptas for all the country’s problems, and the Zumas are back in court. They needed a new scapegoat…looks like Samancor is going to fill the gap and keep the old criminals walking free. Moneyweb / 3 Mar 2021
The Johannesburg Roads Agency’s R50m asphalt plant 'has been down for over five months'.
22