More than 26 000 claims have been submitted, with applications now extended to businesses and workers affected by recent riots.
By Palesa Mofokeng 29 Jul 2021  00:01 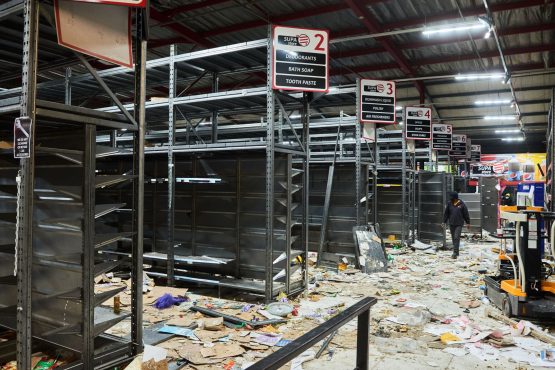 A Soweto supermarket after being looted on July 15. Image: Bloomberg

The R5.3 billion allocated to the Covid-19 Temporary Employer-Employee Relief Scheme (Ters) has been extended to businesses in distress due to the recent riots, however the details pertaining to who qualifies, the payment structure, the application process and the duration of the payment period will follow in a directive yet to be issued, Minister of Employment and Labour Thulas Nxesi said.

Nxesi was joined by Director-General of Employment and Labour Thobile Lamati on Wednesday during a briefing on Covid-19 alert Level 3 measures in relation to the labour and employment sector.

He noted that the normal Ters benefit is designed to assist companies that temporarily need relief but have a plan in place to turn the business around within a period of six to 12 months.

“It should be mentioned upfront that there is currently no benefit quite suited to this situation,” said Nxesi.

“The Covid-19 Ters benefit was established as an intervention for a specific state of disaster situation. Therefore, the current benefits under the employment insurance fund are the only interventions available to cover the affected workers.

“However, in order to ensure that the basic tenets of the [Unemployment Insurance] Act are not violated, [the] department is drafting a special directive dealing with the plight of the affected workers in the two provinces,” he said.

Nxesi said the objective of the directive is to ensure that workers who would not normally qualify for these benefits due to non-compliance of the employer with the act will be able to access them.

“We are mindful of the urgency of the matter. We therefore commit to expediting the process of drafting and approval of the directive. The UIF [Unemployment Insurance Fund] already has a system in place that will help fast-track the payments,” he said.

It was noted during the briefing that over 26 000 claims have been submitted thus far.

Nxesi said he has instructed his department’s officials to gather data on businesses that have been affected, and to perform an analysis of those that will be able to afford to carry their employees’ salaries during this period.

“About 75 000 workers have been affected by the riots in the two provinces, this may lead to temp[orary] lay-offs or retrenchment. The employment insurance fund has a basket of benefits that can serve as intervention mechanisms to assist affected workers and companies.

“Applications for Ters are made via the CCMA [Commission for Conciliation, Mediation and Arbitration], and an independent adjudication committee evaluates all proposals and makes a recommendation to the director-general of the Department of Employment and Labour,” Nxesi said.

“The Compensation Fund continues to support those who have become sick in the line of duty, and so far just under R90 million has been disbursed for temporary disablement, medical aid, permanent disablement, funeral costs, as well as dependent benefits.”

Listen: UIF chief director Mzwanele Yawa on when those affected can expect their money

Good job the taxpayer has such deep pockets. Forever bailing out the government players for every bad choice and unsolved theft and now even for when they use insurrection as a stick to hit each other.