ANC set to dominate May elections

Trust indices for DA and EFF in ‘negative terrain’, according to poll.
By Mike Cohen and Rene Vollgraaff, Bloomberg 6 Jan 2019  18:43 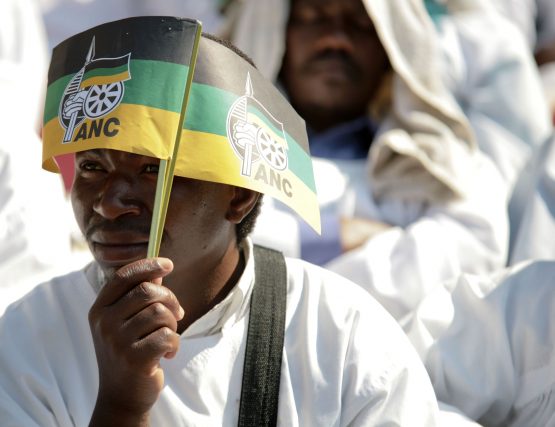 The ANC has been winning back supporters alienated during the scandal-marred Zuma years. Photographer: Nadine Hutton/Bloomberg

The African National Congress appears on track to dominate its sixth straight national election in May as it increasingly wins back supporters alienated by former president Jacob Zuma’s scandal-marred rule, according to an opinion poll released on Sunday.

Of 3 571 adults interviewed face-to-face by research company Ipsos between October 23 and December 4 last year, 61% said they would vote for the ANC, while 14% said they would back the Democratic Alliance, 9% the Economic Freedom Fighters and 2% the Inkatha Freedom Party. No other party polled more than 1% support and 6% of respondents said they wouldn’t vote or didn’t know who they would support, while 5% declined to answer. The ANC won power in the nation’s first democratic elections in 1994 and secured 62.2% support in the last national vote in 2014, but its share tumbled to 54.5% in a municipal vote in 2016, largely due to discontent over Zuma’s rule. Cyril Ramaphosa, a lawyer and former labour union leader, won control of the ANC in December 2017 and became president two months later after the party forced Zuma to step down.

“At the end of the Zuma years, trust in the ANC was very low, but the party has recovered quite significantly in the last year,” Ipsos said. “The trust indices for both the DA and the EFF are in negative terrain.”

The DA, which won 22.2% of the vote in 2014 and 27% in the 2016 municipal ballot, has been plagued by infighting and made several public-relations blunders in recent months, which may have cost it support. Top leaders in the EFF, which secured 6.4% backing in 2014, have become embroiled in a string of scandals, denting its image.

A phone survey of 1 017 registered voters conducted by the South African Institute of Race Relations between November 26 and December 4 showed the ANC had 56% backing, the DA 18% and the EFF 11%. Based on a 69% turnout, the ANC would end up with 59% of votes cast, the DA 22% and the EFF 10%, the Johannesburg-based institute said.

People do not mind if the party they support cannot provide running water, electricity, sewerage works, medical care, libraries, schools and employment opportunities, as long as that political party promises to take from some citizens the property belongs to them, and give that property to the voters, to whom is does not belong. Criminals, supporting a criminal organization. The vote is 61% in favour of the Venezuela outcome. The Venezuela outcome will cause 20 million South Africans to die prematurely.

“It may be that a free society… carries in itself the forces of its own destruction, that once freedom has been achieved it is taken for granted and ceases to be valued, and that the free growth of ideas which is the essence of a free society will bring about the destruction of the foundations on which it depends.” – Friedrich August von Hayek

And the Dumb-DA is in full retreat. The single greatest mistake they made was getting rid of Helen Zille and replacing her with a clown.

Meanwhile, in 2019, the ANC/EFF regime will demonstrate (again) everything that is wrong with post-’94 SA – ie parasites will always opt for handouts.

The only future for civilized life in SA is a full scale TAX REVOLT. For, if you think that voting will secure a future for your children and theirs, then you are not thinking (and your children deserve the dystopia you will hand to them).

Isn’t it sad to see how south african voters squander the right to vote. The anc gang has destroyed SOE s ,created huge unemployment, a mess of a health care system, a banana Republic justice system , and grossly corrupt saps. Inflation high, no growth, worst maths marks on the planet but they vote anc. All what I can say is shame. A country of rubbish

My view is that Ramaphosa was allowed to become president as long as he agreed to have Mabusa vice president. After the elections Ramaphosa will be recalled and Mabusa will be president. Because Ramaphosa is an Uncle Tom.
Game over.

Maybe he is the Deputy President but I suspect vice.

With Zuma still on the ‘list’ for the ANC’s NEC, they may still haemorrhage more votes. These early polls do show how ignorant many South African are.

The weakness in our democracy is the same weakness that made ZANU PF, Frelimo and MPLA stay in power, no matter how badly they rule – they fool and mislead the people in the rural areas, come every election.

If people in Zim vote for 95% unemployment, it shows they do not know how to vote or how democracy works.

In SA there is still, 25 years on, no voter education, which enabled the governing party to sell out their own people, since April 94, to Aids, crime, illegal immigration, cadre deployment and a host of other issues.

The IEC is responsible for voter education and should be fired.

Not surprising at all rally, identity & race politics play a much larger role in SA elections than any track record or proposed policy plans do.

The bulk of ppl in SA are waiting for an excuse to vote for the ANC vs actually interrogating what will be best for them.

Not unique to SA but our additional diversity does give it more weight and direction, ANC plays the left and right card plus throws in some race politics to try cast as wide a net as possible without actually having any sort of decent track record or plan to decrease poverty, they really only care about short term power grabs.

if it were easy though you’d expect multiple parties to simply copy that and the vote would be more distributed, after all politicians role is to be elected and thereby they must flip towards what will get them elected. The brand power of the ANC is an amazing thing.

No wonder the ANC is changing into an ‘EFF-lite’. Just look at the support the eff is gaining. Nothing personal,guys. Just politicians trying to stay in power. But even the poor will get poorer with those ‘EFF-lite’ ideas. Thats the thing with democracy; if the majority are without insight a fool will end up in charge and everyone loose.

I did Statistics as a University subject many years ago but to me the sample is far too small to be of any use.And where did they get their sample from? Was it Soweto? Or Nkandla? The D A does their own polls and are far more accurate on past history

Number of other polls points in the same direction, including DA’s own internal polls.

In the land of the blind, the one-eyed man is king.

Imagine a world where the electorate carefully weigh-up the policies of each party and votes accordingly. This will never happen in third-world democracy with an uneducated populace that is incapable of thinking critically.

ANC strategy is effectively: deliver nothing, blame everyone else and maintain power. Sound fair?

SA needs a political change now than ever before. The current governing party seem to be too comfortable and hapless. The promises since madiba’s time has not been fulfilled, housing, electricity, running water, roads, and most of all schools in townships have not been built. These pupils travel distances by taxi’s and bakkies to attend schools that were built by apartheid system in Indian and white suburbs. These schools are now overcrowded with scholars from these suburbs attending private schools with huge costs placing a financial burden on parents. The ANC has ignored all the promises they made to the people post 1994….houses built have been collapsing, hired mushroom builders with no building experience, roads to and from townships have pothole the size of golf bunkers, our roads once an envy of the world is now in tatters…all over you see patches upon patches..The state of our cities is little to be desired….our dumps looks more in order or cleaner, squatter camp dwellers are the filthiest, roads are spewed with rubbish whilst the taxpayers foot the bill for refuse removal, they get it free with water…they are allowed to build without building plans using blocks and bricks. get electricity free by tapping lines. The list is endless…

A political change is overdue,

The people I feel sorry for are actually the unemployed voters who vote over and over for the ANC believing that things will change and they will get wealthy. Still they live in poverty. BEWARE when you promise and promise and nothing happens you stand a chance of a strong backlash. You can only blame Apartheid for so long, ANC has had 2 decades to turn things around.

Number of posts critical of people still voting ANC despite its terrible track record. For us middle aged white guysa from the suburbs this might be completely baffling. But lets put ourselves in the average poor black person from a rural areas shoes, you main source of income is the paltry social grants that your grandparents gets and that needs to keep an extended family clothed and fed, why would you put that at risk voting for the party that the wit baas who picks you up on Saterday mornings and calls you boy votes for?

Put yourself in the shoes of an eductated black professional. You like the policies that the DA are talking about, but you really do not like the tone of Helen Zilles comments nor do you particularly care for Maimane code switching between his normal English model C school accent when speaking to white people and speaking in a “black accent” dumbing down his English when speaking to a black audience. You also feel that the DA calling itself a struggle party and the home of Madiba is rubbish. You then browse MW and seeing the patronising tone of the comments you happily make your cross behind the ANC. Simply no way you can betray your own people by voting with those that disparage you so much.