The company fabricated financial statements even while securing a R4.3bn investment by PIC, according to ex-Ayo CIO.
By Ana Monteiro, Bloomberg 8 Apr 2019  15:36 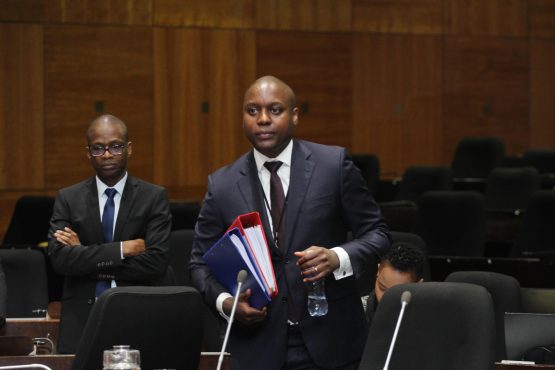 The funds generated by Ayo from its initial public offering were mainly used on related-party transactions, and even its financial statements 'are manufactured,' ex-CIO Siphiwe Nodwele says. Picture: Moneyweb

Ayo Technology Solutions is at least partly an illegitimate business and has fabricated financial statements even while securing a R4.3 billion ($304 million) investment by Africa’s biggest money manager, according to Ayo’s former chief investment officer.

A decision by the Public Investment Corp., which manages South African government-worker pension funds, to buy shares in Ayo is at the heart of an ongoing inquiry into how the state-owned company makes financial decisions. The purchase in December 2017 valued Ayo at R14.8 billion, even though its assets were estimated at the time at R292 million at the time.

In a statement prior to listing in Johannesburg a year ago, Ayo set a “very high revenue target” but showed “no urgency to conclude transactions,” ex-CIO Siphiwe Nodwele told the PIC inquiry on Monday in Pretoria. He and former Chief Executive Officer Kevin Hardy quit with immediate effect in August, after the board didn’t address governance concerns raised by the executives.

The funds generated by Ayo from its initial public offering were mainly used on related-party transactions, Nodwele said, and even its financial statements “are manufactured.” The ex-CIO added that parts of the company are above reproach, such as the Puleng Technologies division, and described how he and Hardy hired people to secure a contract with petrochemicals company Sasol.

In July, the board proposed a resolution to invest R1.5 billion of the company’s cash, about one third of what Ayo held, with asset managers, which Hardy, who also gave testimony Monday, labelled a “blatant attempt” to move money out of the company. The resolution was eventually withdrawn.

In the past year, half of the PIC’s executive committee have been suspended or resigned. That includes then-CEO Daniel Matjila, who quit in November. Victor Seanie, who was an assistant portfolio manager at the PIC before he was suspended in January, told the inquiry earlier this year that the organization moved too quickly to invest in Ayo, and that Matjila was key to signing off on the deal before the PIC’s portfolio management committee had met to discuss it properly.

Ayo is linked to Iqbal Surve, a South African businessman who was forced to cancel a listing of media group Sagarmatha Technologies in April. Ayo is a viable investment, the media tycoon told the inquiry last week. The company didn’t immediately respond to questions seeking comment after asking for them in email form.

Surve has also been accused of interfering in the editorial process of newspaper owner Independent Media, which his Sekunjalo Investments acquired in 2013. Ayo’s original board included three non-executive directors who were employed by the media group, Nodwele said.

Ayo’s current CEO, Howard Plaatjes, was chief operations officer at Independent while corporate affairs director Vanessa Govender was the company’s executive for human resources, according to the technology firm’s website.

The close relationship between Ayo and Independent meant it was “easy” for Surve to ask for favorable articles to be published, Nodwele said. “Editorial independence of Independent Media does not exist,” he said.

Surve told the commission he doesn’t have undue influence at Independent Media.

I understand Iqbal’s plight. He wants to become rich, but how do you manage that, when there are no honest ways left of becoming rich? I look around me and see corrupt politicians, corrupt business people and crime syndicates ruling and regulating the world. They collect money and influence which they use to enrich themselves, in the process leaving crumbs to the rest of humanity. Jacob, Iqbal and friends have just understood the script better than Joe Public, who still feel the need to spend a lifetime on trying to earn an honest buck, sticking to the law and generally trying to act in an ethical and moral way, when the law was always meant to keep the ones on the outside on the outside.

Rubbish. The vast majority of businesspeople in South Africa and over the world operate within the law, pay their taxes and treat their employees fairly.

It is unsubstantiated, populist claims like yours that gives fertile ground for the rightwing and leftwing politicians that will take us into world war iii.

Here is the answer to your question.

“Now since man is naturally inclined to avoid pain- and since labour is pain in itself- it follows that men will resort to plunder whenever plunder is easier than work. History shows this quite clearly. And under these conditions, neither religion nor morality can stop it.
When, then, does plunder stop? It stops when it becomes more painful and more dangerous than labour.
It is evident, then, that the proper purpose of law is to use the power of its collective force to stop this fatal tendency to plunder instead of to work. All the measures of the law should protect property and punish plunder.” – Frederic Bastiat “The Law” 1850

Whilst Batman and Notwarren views are valid imo, the absence of consequence management in present SA will allow for non mainstream idea’s to attract populism.

So even the ex CIO of Ayo Technology Solutions Ltd. says the company is ‘partly an illegitimate business and has fabricated financial statements even while securing a R4.3-billion investment by the Public Investment Corporation’.

So where was all that company law and regulation to get listed in the first place?

So if this is true then how to the poor pensioners, who’s money was stolen by Iqbal Survey and the PIC, get their hard earned pension monies back??