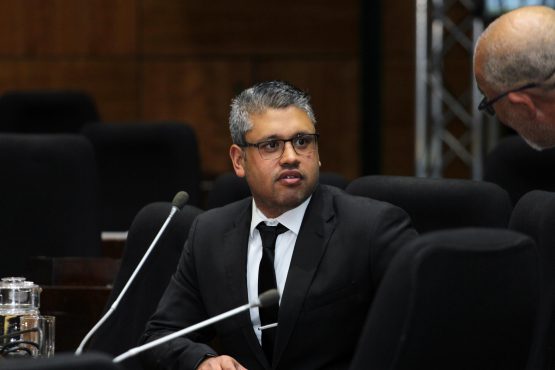 Former Ayo executive Malick Salie told the inquiry that he resigned from the board because of the 'pressures and governance issues' surrounding the company. Picture: Moneyweb

“Stretched”, “thumbsuck” and “manipulation” were among the words used at the judicial commission of inquiry into the Public Investment Corporation (PIC) to describe the informal pre-listing valuation carried out by Ayo Technology Solutions executives, which set the tone for how much the company was eventually valued at.

Ayo chief investment officer (CIO) Malick Salie described on Tuesday how, in the build-up to finalising the pre-listing statement, there were multiple upward revisions to the company’s valuation – from an initial estimated value of R2.3 billion to an expected value range of between R10 billion and R15 billion – at independent media owner Iqbal Survé’s behest.

Survé had told the PIC that he was “not involved in the Ayo listing”. However, Salie told the commission that the Ayo team “had various interactions and meetings with Survé, who set the tone for the [pre-listing statement] and provided his expectation of the valuation of Ayo”.

Read: AEEI does an about-turn on its treatment of Ayo

Salie formed part of the African Equity Empowerment Investments (AEEI) team tasked with taking Ayo public. AEEI was Ayo’s parent company and subsequently reduced its shareholding to 49% after the company’s listing on the JSE.

Salie told the commission that he had initially valued Ayo at R2.3 billion. This, he said, was based on Ayo’s business and a 30% earnings transfer from British Telecoms South Africa (BT-SA), a company in which AEEI had a stake and had planned to transfer to Ayo upon listing.

The valuation was then revised upwards to R5 billion after additional information regarding BT-SA’s clients and customers, which would be acquired by Ayo, was incorporated into the Ayo valuation model.

At a meeting with Survé in July 2017, where the draft pre-listing statement with a R5 billion valuation was discussed and reviewed, Salie said: “Survé was of the view that the desired value of Ayo be set between R10 billion and R15 billion.”

He said that at the meeting “Survé’s recommendations were incorporated in the draft [pre-listing statement] with a valuation of R13 billion”.

“It appears to me that this is a juggling of figures and the end result is a thumbsuck,” remarked evidence leader advocate Jannie Lubbe. Salie said that, at that stage, it was.

Assistant commissioner Gill Marcus said it appeared to her that the only verifiable and real valuation was the R2.3 billion whereas beyond that there are “extrapolations of what might be and what could be”.

“Numbers are then manipulated to say that to reach that target this would then have to happen but they were not real,” said Marcus. Salie said it was “100% correct” in the build-up phase.

According to Salie, Survé met with AEEI’s management and executives in August 2017 to inform them of considerations when valuing Ayo based on the trajectory of the ICT market. Salie said that while he was not part of the meeting, he received an email from AEEI financial manager Njabulo Jiki stating that Survé’s valuation expectation for Ayo was R20 billion.

Jiki, who was at the meeting, said the key take-away was that “R10 billion would be bronze” and anything below R10 billion “dismal”.

Ayo’s final valuation amounted to R14.7 billion at R43 per share, with the final model signed off by Grant Thornton auditors.

The PIC subscribed to a 29% stake in Ayo, paying a contentious R4.3 billion in government pensioner’s money. On Tuesday Ayo was trading at R10.99.

Ayo ‘worth 5% of valuation’

Former Ayo CIO Siphiwe Nodwele said in April that Ayo’s valuation was inflated and that according to his calculations, the company was valued at 5% of the final valuation, which is between R700 million and R1 billion.

“There has been so much talk about this valuation and I have been curious to see how it has been developed and it’s becoming clearer and clearer that things are being stretched a bit here,” said commission assistant Emmanuel Lediga.

Salie resigned from the board of Ayo at the beginning of May. He told the commission that he was not comfortable in the current environment given the “pressures and governance issues that have arisen”.

During his testimony Salie mentioned that Ayo’s – let us call it what it is – fraudulent valuation was amongst other things based on its projected earnings from national health insurance projects.

Good Dr. Surve’s publications have been very very positive about NHI. For example, after the budget the Cape Times front page preferred to report on the rather insignificant amount allocated for NHI, ignoring much more substantial issues.

Clearly Surve is expecting a huge windfall from the next ANC money laundering racket.

Who better to be in charge of the nation’s health than Madiba’s personal physician? A man so generous he gives R1 million of pensioners’ money to the ANC election campaign.

Correct. I should have put that part in inverted commas. A number of journalists have pointed out that in order for the Madiba claim to be true Iqbal Surve must have qualified as a doctor as a teenager.

No is no doubt of criminal activity by Iqbal.

Let’s be honest, self valuations never work even when there is no criminal activity taking place.

Is this cock up being laid at the door of Grant Thornton now? Seems like the Auditors are still having to take the blame for devious behavior from CEOs and Boardmembers when it comes to IPO valuations and the unraveling thereafter!

Even with my limited capacity of reading a balance sheet, there are basics like cash, profits, assets and debt,

Goodwill and future projections are nebulous and have no place in an IPO – refer Uber.

Here is another aspect of fraud committed by a JSE Listing against the gullible public an Asset Fund manager.The main culprit are the Non Executive Director,JSE Sponsors who does not do a proper valuation,and check earning base, and controls and Merhcant banks,as well as the JSE.

How does one trust all new Listing,that has come onto the JSE over the last 5 years,and if one look at the listing prices,to the current trading prices,and profits projected at listing,it like chalk and cheese.It goes to show that the investment Public who are being taken for a ride,as long as all the sponsors,Merchant Bank,Attorneys,Auditors get the lucrative fees

I think what is unsaid but implied in your comment is that blatant fraud etc has taken place but zero action has been taken. Confidence in the “system” is zero.

Don’t worry Iqqy. Nobody is going to jail. Ever.

Hopefully this will be the start …. https://www.iol.co.za/dailynews/news/kwazulu-natal/why-durban-mayor-zandile-gumede-is-appearing-in-court-today-23182475

Iqbal Scurvy; “Ayo is worth what I want it to be.”

That the PIC has been duped is crucial to the entire international ratings agencies view of SA and show that the country is a also a “thumb-suck” of hope and projections.

He will get away with this. After all he is a fan and mouthpiece for the ANC criminal clique. NPA leadership, SAPS, etc simply incapable of ensuring a conviction. As for the Courts-no comment