Bank of America sees SA growing at 3.8% this year

Things are looking better on the economic front, with high commodity prices expected to leak into the rest of the economy.
By Ciaran Ryan 31 Mar 2021  00:01 Bank of America (BofA) has lifted its growth forecast for SA to 3.8% this year, up from its earlier forecast of 2.9% – and ahead of National Treasury’s forecast of 3.3%.

Powering this bump in growth are better than expected commodity prices which are expected to remain high for the foreseeable future as China and the US – the world’s two largest economies – bounce from the Covid crash of 2020.

Speaking at a media briefing on Tuesday, the bank’s SA strategist, John Morris, said the US economy is likely to clock 7% growth this year, easing slightly to 5.5% in 2022.

The International Monetary Fund forecasts China growth of 8.1% this year and 5.6% in 2022.

This is creating a surge in demand for commodities, which will lift SA economic growth to 3.8%. However, GDP will only return to pre-crisis levels in 2023. SA consumers have shown resilience over the last year as a result of low interest rates, government support and the commodity spillover. As was the case in the previous commodity super-spike from 2005 to 2008, the overall economy benefits from these high metal prices.

There are risks to this scenario, according to fund managers surveyed by BofA: electricity supply from Eskom being key among them, as well as wage increases which are likely to be 3-4% this year, roughly double Treasury’s target range. Though Eskom is unlikely to need further bailouts, its restructuring will take time and load shedding can be expected for at least another three years.

“Eskom load shedding has continued with the year-to-date energy availability factor at 58.6% from 65% last year,” said the bank in a note issued on Tuesday. “This is expected to continue at least til September. Unemployment rates are elevated at 32.5% with slowing momentum in the jobs recovery. Reform implementation challenges persist. Health experts also continue to warn of a potential Covid third wave in the winter months amid gradual vaccine rollouts.”

The bank’s sub-Saharan Africa strategist, Rukayat Yusuf, says SA’s debt-to-GDP should peak at just under 90% by 2025, and there are some welcome signs of smaller-than-expected bond issues by Treasury in recent weeks, suggesting its borrowing requirements are being tightly controlled.

BofA forecasts inflation at 4.2% in 2021, higher than its previous forecast of 3.8%, after allowing for higher interest rates and rand volatility.

Though the SA Reserve Bank is likely to keep interest rates steady for the time being, the markets are pricing in a 105 basis points increase in rates over the next 12 months.

The interest rate cycle is likely to turn over the next 12 months, most likely in the first quarter of 2022, when the Reserve Bank is expected to start raising rates.

Should oil prices push above $70 a barrel and the rand above R16 to the US dollar, this would nudge inflation towards 5% in 2021 and make SA bonds less attractive relative to other emerging markets.

A record 77% of fund managers surveyed by the bank believe SA bonds are undervalued, and 62% believe equity markets will be higher in six months’ time. Some 54% of fund managers plan to go overweight SA domestic stocks, while “weak earnings” is seen as the biggest risk to the local market.

Equities remain the favourite asset class among fund managers, followed by bonds, with cash falling out of favour.

More managers are overweight platinum stocks and underweight food and retailers as well as construction, general industrial and transport.

Morris says investors surveyed by the bank at a recent conference have started showing interest in resources stocks such as Implats and Sibanye-Stillwater, with particularly strong interest in platinum group metals (PGMs) like Royal Bafokeng Platinum. There is also interest in e-commerce-related stocks, and companies likely to benefit from infrastructure investment, as well as agriculture and logistics.

Economic optimism is near its highest

Fund managers are most optimistic about general mining, platinum, banks and financial services, and beverage and tobacco companies. The least liked are real estate, gold and personal goods. 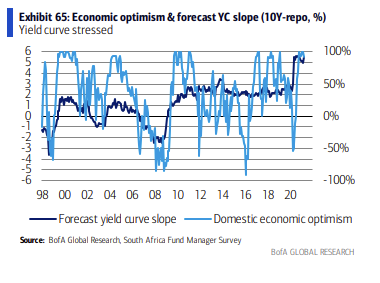 Stats SA understated our decline in 2020 and therefore, in real and unmanipulated terms, SA will probably decline again in 2021.

Fake news- Since March 2020, SA decline by ~52% and now a bank from USA reckons SA will grow by 3,8%?
Funny thing is Moneyweb actually publish this rubbish!

A bit of good news at last!
Happy Holidays to all this weekend. Stay safe, be aware and wear a mask!

Inflation will spoil the party. Gold not too good these day’s. Cash no good ever.

So why no mention about the political risk to SA assets? Best to put a bit away into Crypto as well. To fight inflation and political risk. Its also clear the projected rate of growth will be way below other markets so why risk anything in this unstable country with a handful of counters?

Man this guy is on some of Jamaica’s finest…..

3,8% from where we are post Zuma , Covid and downgrade is…SHOCKING!
We are lower in GDP per capita by a long way from a miserable year like 2019

Whatever the growth number comes out at (1, 2, 5%, whatever)… Inflation and rand depreciation will most definitely be much higher.

So we’re paying with our cost of living and lifestyles.

Until growth is bigger than rising costs were still going backwards.