The communications firm has been found guilty by the UK public-relations industry body.
By John Bowker, Bloomberg 24 Aug 2017  17:12 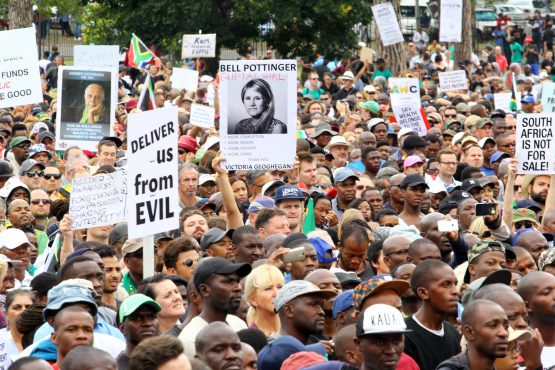 Bell Pottinger LLP has been found guilty by the UK public-relations industry body for breaching its code over work done for South Africa’s Gupta family that led to protests outside the company’s London offices, according to a person familiar with the situation.

The communications firm had been hired by the Guptas to help enhance their image following allegations that they paid off members of the government for state contracts. Bell Pottinger’s work for the Gupta’s Oakbay Investments Ltd. included a social-media campaign aimed at highlighting white dominance of the economy 25 years after the end of apartheid. The maximum penalty that can be imposed by the PRCA is cancellation of the company’s membership of the body.

The decision was reached following a hearing by the UK’s Public Relations and Communications Association in London on August 18, said the person, who asked not to be identified as the decision hasn’t yet been announced. Bell Pottinger will now have five working days to appeal, the person said.

The complaint was brought by South Africa’s opposition Democratic Alliance party after a series of emails leaked to the local media showed Bell Pottinger allegedly violated the PRCA’s charter in its work for the Guptas, who are friends with President Jacob Zuma and in business with his son. The firm dropped the family’s Oakbay as a client in April, fired a partner and suspended two other employees last month over what it said was “inappropriate and offensive” activities conducted in South Africa.

A representative of Bell Pottinger said they would call back when Bloomberg requested comment.

What would be the fair punishment for the damage done to
55 million South Africans?

How does one quantify all that?

Is this not the equivalent of terrorism?

Absolutely. Incitement to commit genocide by waging a subversive propaganda war against one group of the population is worthy of JAIL at the very minimum. There are certainly historical precedents in evidence. They hanged Julius Streicher for this very thing.

It makes one sad and bitterly angered that a non patriotic family actually hired a company to stir racial hate in SA. Voertsek man!