Eskom has skimped on maintenance for years as executives focused on keeping the lights on at all costs – a cycle current CEO Andre de Ruyter intends to break. Image: Waldo Swiegers, Bloomberg

In fact, for six of the coming 13 weeks, it forecasts that it will “definitely” be between 1 000 megawatts (MW) and 2 000MW short to meet its reserve margin and “possibly demand”.

Using the assumption of a total of 12 000MW of breakdowns, its “planned risk” level is effectively guaranteeing some load shedding in these weeks. In the second week of February, the worst of the coming 13 weeks, it is forecasting to be at least 2 000MW short to meet demand. 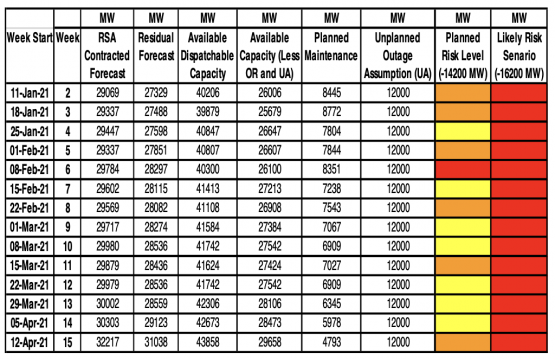 This comes as the utility was forced to implement Stage 2 load shedding from midday on Thursday as it lost four generation units (two at Kusile and one each at Kriel and Duvha). Beyond this, it had a further four units whose “return to service from planned maintenance” was “delayed”. This saw unplanned outages spike to 14 748MW, nearly 3 000MW higher than its long-term assumption of 12 000MW used in its planning. It is these spikes in breakdowns that necessitate load shedding.

Eskom announced on Sunday that load shedding would reduce to Stage 1 from 11pm on Sunday to 5am on Monday, then resume at Stage 2 until further notice.

It said it would provide a further update on Monday.

Typically, the utility is able to augment peak demand with its peaking power plants, either via pumped storage schemes or open cycle gas turbines (OCGTs) which burn diesel.

To meet the 7pm peak on Thursday (the highest in a while), it met around 29 000MW of demand by using the following additional sources:

Eskom’s generation issues have been compounded by it being forced to take unit one of Koeberg offline earlier than planned for scheduled maintenance after “an increasing leak rate was observed on one of three steam generators”.

Originally, it was to take this unit offline for refuelling and routine maintenance in February. It expects the unit to “return to service during May 2021” meaning that a shortfall of this 900MW of dependable, baseload supply will persist until the start of winter.

In the first week of January, it relied on between 1 139MW and 1 445MW of so-called “non-commercial generation” capacity during each evening peak.

Because of the precarious generation picture, one can assume it is using some of these units (Kusile 2 and 3 and Medupi 1) throughout the day.

Two of these units are set to achieve commercial operation in the next three months. By mid-April, Eskom says it will have 43 858MW of dispatchable capacity from the roughly 40 000MW currently. Still, with this increase in capacity it is still forecasting supply constraints, which means likely load shedding.

At this point, it can reduce the amount of planned maintenance by deferring certain work to give itself more headroom, but this is the primary reason it’s in this position to begin with. The utility has done too little maintenance for about a decade as successive executives focused on keeping the lights on at all costs.

Chief executive Andre de Ruyter has been clear that he intends to break this cycle, as this is the only way that Eskom’s fleet reliability will improve over time.

At this stage, the amount of planned maintenance over the next three months remains at the level it forecast in the first week of January. Moneyweb will monitor this closely for any changes.

Critical to avoiding load shedding is the utility trying to keep unplanned breakdowns to below 12 000MW. However, because most of its coal fleet is old and unreliable, when units break down it has to run those units that are operating harder to try and boost supply. Often, this results in further trips and outages which is why Eskom typically takes many days to recover from load shedding.

From Eskom’s own publicly available dashboard, a total of 43% of its capacity is unavailable due to breakdowns, planned maintenance, and “other outages” so far this month.

This is the highest in at least two years. 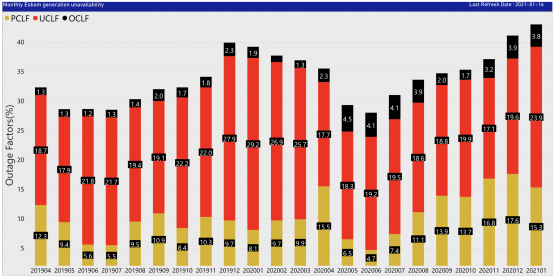 There are however a few bright spots in this data …

So far for January, 23.9% of Eskom’s generation fleet is unavailable due to breakdowns. This sounds high – it is – but it is significantly lower than the 27.9% of unplanned outages across the fleet in January last year and 29.2% in February 2020.

Since September, this number has been 13% or higher (as much as 17.6% in December), compared to 2019 where maintenance barely exceeded 10% of capacity for much of the year.

One wonders if businesses have adapted through the years of load shedding? Especially large users like smelters etc.

But it seems as if Mr.de Ruyter have not really improved Eskom at all. We still have load shedding and debt and all those things.

The ANC are styming de Ryter

It was just another window dressing excercise to fool us

I don’t see him staying on much longer

Minister Gwede must rather stick to organising family weddings and union meetings.

De ruyter is a puppet on a string for eskom.

Dear Moneyweb please go and download Eskom system adequacy report published in the same place as you found this data.

If you read that one all the way to the end it seems that load shedding is likely to continue until 2025 on a regular basis unless.

Eskom is just assisting the ANC in the rapid scheduled destruction of the SA industries and economy!! Viva !!!

They have transformed South Africa and making good progress, no economic yard stick can disprove the fact that they are achieving their goals and objectives.

More money than ever is flowing to BEE Schemes, providing value to the 1000 black industrialists whilst the a greater area of land control is given to Traditional Leaders with their 10 kings and Queens who are given fair value salaried and laws over their land.

The White Monopoly Capital is leaving South Africa exactly as the anc have planned.

After all democracy is just a word and so is Freedom & Rights.

In winter the load shedding gets worse.

This is part of the diabolical situation we have the ANC to thank for.

ANC are just a conglomerate of thieves.

Easy to fix this.

The struggling entrepreneurs and the remaining taxpayers are the real heroes in this country. They do not get the credit and respect they deserve.

No modern economy can survive the cANcer……

True. To the the north and the electricity scenario is much the same. The political parties still remain.

We WERE a modern economy

Once the pride of Sub Saharan Africa, now just another failed African State, and they continue unabated with little or no resistance

we are pretty f…… far from a MODERN economy. For people that doesn’t believe in the evolution theory the ” de-evolution ” of RSA should be the dire evidence!

COVID-19 doesn’t scare me but ANC-2021 terrifies me. Like locusts, they consume everything and leave a wasteland behind

In 13 years of loadshedding not a single Eskom employee has been disciplined, let alone fired.

It is thoroughly naive to discount deliberate destruction as a prime cause of loadshedding.

We have seen vandalism everywhere “stakeholders” have “grievances”: long haul trucks; the railways; health, road and school infrastructure; and during industrial action fomented by untouchable unions.

Loadshedding is the ransom we pay if the ANC’s alliance and blessing partners are not obliged.

Let’s not forget that Mantashe has apparently failed to lift his pen and approve the roll-out of new renewable sources which would help the situation tremendously. The utter uselessness of this government simply beggars belief.

Whats the photo for? Does Eskom have a helicopter to fly the CEO around…

I think that this link sums it up better than I ever could:

Back to their old tricks

In a civilized country the government would be voted out of office just due to its actions and inactions regarding its 100% owned electricity producer.
Here , despite theft and human abuse on an unheard of scale(starvation, no water, crime, poor housing , education, police etc) , the government is returned to power every 5 years and what votes it loses goes to the red beret gang.

Doesn’t that say everything?

Flee while you can!

Yeah, 50% from a low base is virtually nothing.

My cup runneth over from the good news.

May I switch on an extra LED light tonight?

Could somebody explain why in the May to August period we always get away with none or minimal loadshedding despite the higher demand then. Yes I know they do most or all planned maintenance in spring and summer.