The airline’s BRPs say a statement released by the airline suggesting otherwise was not vetted.
Tebogo Tshwane 27 May 2020  09:23 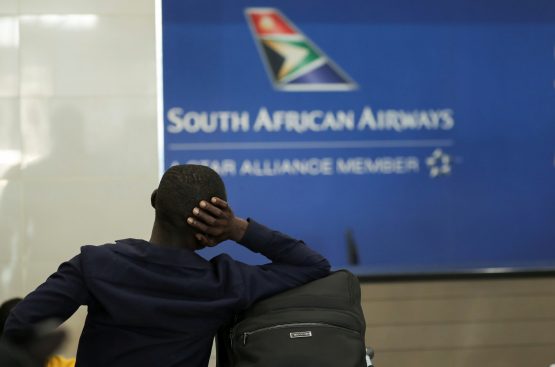 The BRPs and the Minister of Public Enterprises have agreed to work on a rescue plan by the end of June. Image: Reuters/Siphiwe Sibeko

On Tuesday a statement released by the airline’s communications department quoted the chief commercial operator Philip Saunders as saying the airline was “looking forward to welcoming and serving [its] customers once again” when SAA resumes domestic flights in mid-June.

Salary cuts at SAA to keep airline going until June

The announcement came on the back of President Cyril Ramaphosa’s Sunday night briefing where he said domestic air travel for business purposes will be permitted when the country moves to alert Level 3 of lockdown in June.

“The flysaa statement was released in violation of the BRPs communications protocol which was put in place so that unvetted releases are not issued,” said BRPs Les Matuson and Siviwe Dongwana in a statement.

“The position around the cessation of flights remains as is until SAA has a better sense of what the Level 3 lockdown means in terms of domestic air travel.”

Matuson and Dongwana said SAA would also need to consider the commercial viability and demand for these flights and that the availability of future funding was a “key variable in all of the above considerations”.

The BRPs were appointed in December 2019 to oversee and supervise the management, affairs and business of the company while working on a plan to restructure the airline.

Over five months since the process started the BRPs have not published a final plan and have depleted the R5.5 billion provided in post-commencement funding with the government refusing to extend any more money.

When the country instituted a nationwide lockdown as a response to the emergence of the Covid-19 pandemic the airline was forced to ground its flights as restrictions were placed on international and domestic air travel.

“It is unfortunate that the unvetted press statement created an unfair expectation on our relevant stakeholders, including SAA’s customers as well as employees, who are on unpaid absence as a result of the travel ban which led to the halting of the company’s operations and compounded its financial distress,” said Matuson and Dongwana.

“The BRPs focus is on the publication of the business rescue plan as outlined in the Scopa update on 15 May.”

BRP’s will soon be replaced

But they earned a lot achieving nothing.

It was all a ruse – – typical ANC style ruse

She should at best be appointed to clean the floors.

Don’t blame the BRP. Called political interference. You heard of reckless trading….no post BR funding…insolvent…bankrupt….and you think you can still fly
Why is Comair not even considering putting aircraft in the air?…Not viable

The plans for SAA should be collected and bound in a collectors edition. Not to be issued to BCom students ever!!

So now everyone can drive to Cape Town or catch a R30k jet flight. Happy days…Be careful what you wish for…

For the fools that remain in SA yes.

I will be catching an international flight out of here. Likely on Emirates.

My brother…. I think im gonna join you on that flight too as soooooon as emirates flies….

We got the wrong people looking after this country.

Article title should read “….will not resume flights ever”

Is Germany also going down the tubes? Cause they just bailed out Lufthansa for R200bn. Just asking…

Well, we all saw it coming. The BRPs are in the departure hall and will be on the first flight out. Next forecast: keep the old SAA open. Avoid a liquidation and move the usable assets to a new airline. Let the new airline take over SAA’s routes and business while scaling down the old SAA until it’s just a dusty office in a hangar somewhere. Keep a much closer eye on the comrade managers and the comrade procurists. Send fruitless comrades to Mpumalanga or Limpopo. Close the old airline when the economic times are better. L