Mokonyane denied ever having received the payments.
By Paul Vecchiatto and Mike Cohen, Bloomberg 21 Jan 2019  17:00 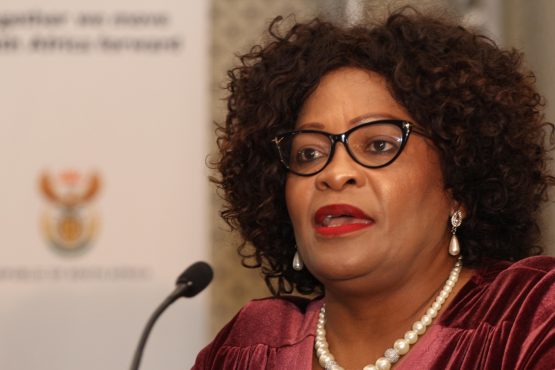 Environmental Affairs Minister Nomvula Mokonyane was paid bribes and given numerous other gifts and favors to try and enlist her support to further the interests of services company Bosasa, according to its former chief operating officer.

Mokonyane received monthly cash payments and other benefits for several years while she was serving in her previous posts as safety and security minister in the central Gauteng province and as the country’s water affairs minister, Angelo Agrizzi told a judicial commission that’s probing graft during former President Jacob Zuma’s rule. Bosasa, which was renamed African Global Operations in 2017, derived little benefit from the payments, he said.

“I know the monthly amount was R50 000,” and the money was handed over by the company’s Chief Executive Officer Gavin Watson, Agrizzi told the commission in Johannesburg on Monday. “I would have to pack it and he would often deliver it in front of me.”

The judicial panel, headed by Deputy Chief Justice Raymond Zondo, has previously focused on allegations that members of the wealthy Gupta family used their close relationship with Zuma and other officials to loot state companies allegations they deny. Agrizzi’s testimony, which has also implicated a number of other senior politicians and officials, indicates that the problem was far more widespread and could further damage the ruling party’s reputation ahead of elections scheduled for May.

Mokonyane denied receiving payments, according to Johannesburg’s Sunday Times newspaper, which reported about them on Sunday.

Bosasa gave Mokonyane gifts of meat and alcohol each Christmas, hired her daughter a car, paid for her family’s funerals and helped maintain her houses. When Agrizzi complained that Bosasa wasn’t getting anything from Mokonyane in return, Watson told him that she had political clout and could help protect the company from prosecution.

Bosasa helped arrange catering for several ANC rallies and supplied a cake for Zuma’s 72nd birthday. Bosasa paid R500 000 a month to officials who oversaw South Africa’s prisons, which enabled it to retain lucrative contracts. The monthly amount increased to R750 000 after Tom Moyane, a close Zuma ally, was appointed commissioner of the department.

The Department of Justice was paid R15 million for its help in securing a tender in 2013, equivalent to 2.5% of the contract price. Transport department officials were paid bribes of R300 000 a month to assist Bosasa.

Three ruling party lawmakers including Vincent Smith, were paid monthly bribes to protect Bosasa during parliamentary hearings and ensure it wasn’t precluded from winning further government contracts. Smith has previously said Bosasa helped arrange a loan for him, but denied receiving bribes. Agrizzi said he personally saw bribes being handed over to officials at restaurants and hotels, or paid them himself.

I wonder if any of those who allegedly received bribes monthly include the amounts they would “lose” if they are moved to other positions? In the above example, would she have said to her boss – hey, I’m gonna lose out on R50 grand per month so you’d better make it worth my while to move. . . 🙂

To paraphrase a famous harlot, “Well she would, wouldn’t she.”

Ofcourse she will deny deny deny. That is all that these leeches do.

She needs to subject herself to a detailed forensic lifestyle audit.

Failing which her denials ring hollow, and are to be taken as lies…

Paul Vecchiatto and Mike Cohen, why are you dragging Former President Zuma into this equation??? Let each men and woman carry their own cross. There’s in no link whatsover with Mr Zuma in this case and stop trying to whip our emotons into this. Nowhere has Mr Zuma’s name been mentioned this far, and lets keep it at that. PLEASE.

“Mama- Transaction” was appointed by Zuma. Let them both pick up their crosses!