While no one has formally announced their intention to run for party president in December, Ramaphosa is expected to seek a second term.
By S'thembile Cele and Antony Sguazzin, Bloomberg 13 Jan 2022  14:07 A campaign to oust South African President Cyril Ramaphosa as head of the ruling party has begun.

Ahead of a December conference where party members will vote on senior leadership positions, Tourism Minister Lindiwe Sisulu criticised the nation’s top judges as “mentally colonised” and said not enough has been done to address the legacies of apartheid including poverty and land inequality.

Read: Sisulu didn’t criticise the judiciary, she insulted it

Sisulu’s comments position her as a potential leader of a faction of the African National Congress loyal to former President Jacob Zuma. That group has opposed Ramaphosa’s attempts to implement political and economic reforms and crack down on graft.

Key to Ramaphosa’s drive to renew the party after nine years of scandal under Zuma’s tenure is respect for the rule of law and the rebuilding of the institutions that underpin the constitution. Persistent attacks on the judiciary and a drumbeat of corruption scandals under Zuma undermined business confidence.

“Her remarks are dangerous because investors, especially international investors, look at how cabinet ministers uphold the rule of law and will not appreciate a minister criticising the constitution that they have sworn to uphold,” Minister in the Presidency Mondli Gungubele said by phone. “If she doesn’t agree with it now, she can resign.”

Sisulu, who has been a member of parliament since the end of apartheid and has held several ministerial portfolios, has effectively switched allegiances.

In her initial opinion piece — published January 7 by a media organisation aligned to Zuma’s faction — she said “we have legitimised wrongdoing under the umbrella of the rule of law” and described the constitution as a “palliative.”

The 67-year-old daughter of Walter Sisulu — a close ally of Nelson Mandela who spent time in prison with him on Robben Island — was Ramaphosa’s running mate at the 2017 party conference where he narrowly defeated Zuma’s ex-wife Nkosazana Dlamini-Zuma, whom the former president had backed.

Zuma faces a trial over corruption charges linked to a 1990s arms deal and was last year sentenced by the Constitutional Court to 15 months in jail for refusing to testify at an inquiry into state corruption that the government said saw R500 billion ($33 billion) stolen during his rule. His imprisonment sparked riots that triggered the worst violence since the end of apartheid, with more than 350 people killed. He is currently appealing an order to return to jail after his release on medical parole was ruled invalid.

While no one has formally announced their intention to run for party president in December, Ramaphosa is expected to seek a second term.

Ramaphosa, 69, became South African president in 2018 when the ANC ordered Zuma to step down, fearing that he would cost the party votes. An initial wave of investor enthusiasm, spurred by his pledges on reform and corruption, saw the rand rally. While that enthusiasm, dubbed Ramaphoria by the media, has cooled he remains more popular than his party. 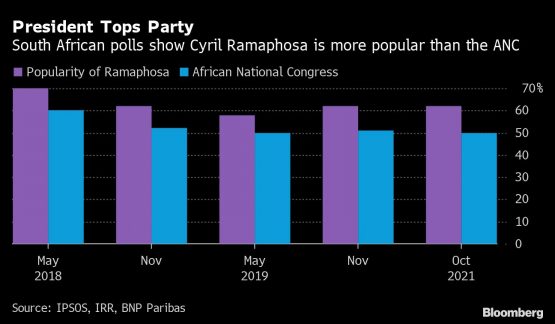 Sisulu’s criticism of the judiciary in her first article published on January 7 drew fire from Acting Chief Justice Raymond Zondo, who described the attack as unsubstantiated and “unacceptable.”

“There is no analysis of anything,” Zondo said on January 12. “It’s just accusations, insults to the judiciary.”

Zondo headed the more than three-year inquiry into state corruption. The first of three reports by the Zondo commission, all of which are expected by the end of February, tied Zuma to widespread corruption at the state revenue service and the national airline. Ramaphosa is expected to announce what action he will take on the commission’s recommendations by June.

Sisulu defended her position in a second piece published on January 12.

“Little else is requisite to carry a state to the highest degree of opulence from the lowest barbarism but peace, easy taxes, and a tolerable administration of justice.” – Adam Smith

The crime rate, service delivery protests, Zuma riots, and the prevalence of zamma-zammas and the construction mafia destroys our peace.

Stealth taxes like BEE, the cost of electricity and fuel, redistributive municipal taxes, inflation tax, cadre deployment, estate duties, and CGT implies that South Africans are enslaved under the highest tax rate in the world.

BEE, cadre deployment, and EE, combined with the fact that our NPA is too incompetent to prosecute the criminals and state capturers mean that we have poor administration of justice.

The ANC combined these factors to push the state towards the lowest barbarism as explained by Adam Smith.