In a budget aimed at encouraging the private sector to bolster investment and drive economic growth.
By Monique Vanek, Bloomberg 24 Feb 2022  08:14 A R182 billion ($12 billion) tax boon was used to pay down debt, cut corporate income taxes and finance an extension of welfare payments for the jobless, while staving off bailouts to state-owned companies and increases in public wages.

The following charts show some of the highlights of the market-friendly budget Godongwana delivered on Wednesday: 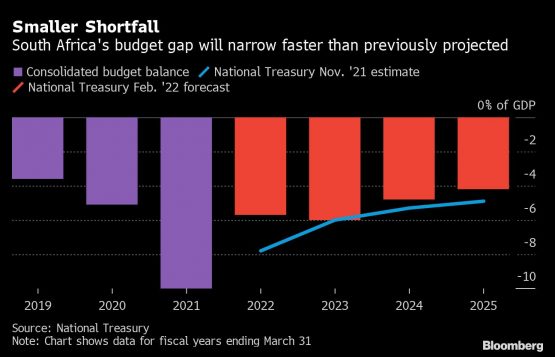 The consolidated fiscal deficit is now seen at 5.7% of gross domestic product in the fiscal year through March and will narrow to 4.2% of GDP in 2024-25. That’s better than the government’s previous estimates and is largely due to better-than-expected revenue collection that’s currently being propped up by robust demand and high prices for commodities. Government debt is now seen peaking at 75.1% of GDP in the 2025 fiscal year. While that’s at a lower level and a year earlier than previously expected, Godongwana cautioned against complacency.

“Our debt burden remains a matter of serious concern,” he said in a speech to lawmakers. A primary budget surplus, where revenue exceeds non-interest spending, of R3.2 billion is seen by 2024, a year earlier than anticipated. That will bring multi-year fiscal consolidation efforts to a close and allow the government to “reconsider the funding of South Africa’s priorities” in a more stable environment and contemplate the introduction of a new, more robust fiscal anchor, according to the National Treasury. Godongwana stuck to his predecessor Tito Mboweni’s plan to lower the corporate tax rate by one percentage point to 27% from April 2022. That’s the first decrease in the rate since 2008.

While the move will cost the government R2.6 billion in revenue for 2022-23, it should boost investment and reduce tax avoidance.

The Treasury raised its economic growth forecast for 2022 to 2.1% from 1.8%, and sees expansion at 1.6% next year. Progress on structural reforms, including reducing the cost of doing business and improving energy security, could bolster output.