Charts showing what to look for in Mboweni’s budget South African Finance Minister Tito Mboweni is expected to outline steps to revive an economy ravaged by the coronavirus pandemic while halting a deterioration in public finances in Wednesday’s budget.

These charts show what to look out for as he presents the fiscal framework for the next three years. 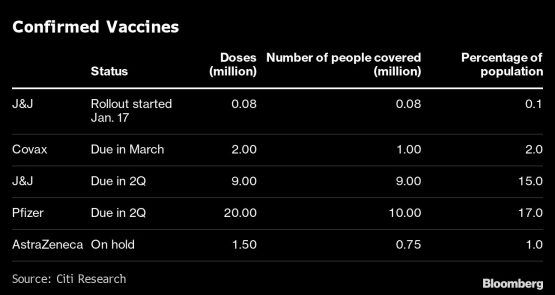 The minister will probably detail plans to pay for Covid-19 vaccines. While the Treasury estimates it could cost as much as R24 billion ($1.6 billion) to immunise 40 million people, or around two-thirds of South Africa’s population, it’s unlikely to bear all the costs.

The country’s biggest companies are in talks to help finance and facilitate the rollout, and medical insurers may pay to vaccinate their members and possibly subsidise the cost for an equal number of non-members. 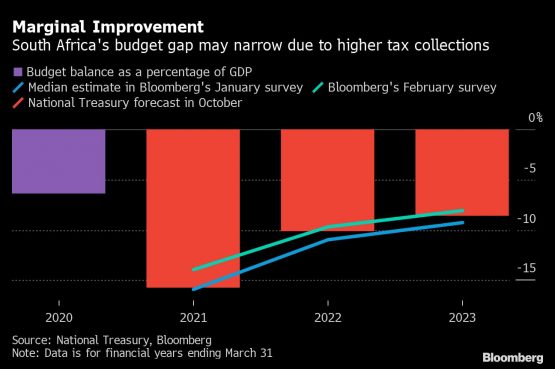 The consolidated budget deficit may be 13.9% of gross domestic product this fiscal year, according to the median estimate of 22 economists in a Bloomberg survey. That’s less than the Treasury’s October estimate of 15.7%, and mainly due to better-than-expected tax collections.

The Treasury last year said it plans to raise an additional R40 billion through taxes in the medium term, starting with R5 billion in 2021-22. Economists expect this to come from excise duties on alcohol and tobacco products, fuel levies and by not adjusting tax brackets for inflation, rather than new measures such as a wealth or solidarity tax. 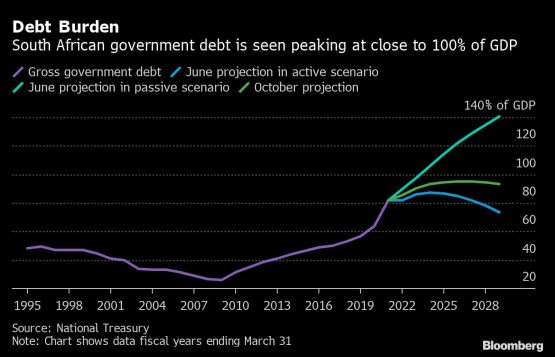 The market will look to Mboweni for an update on Treasury’s liability-management plan that sees debt peaking at 95.3% of GDP in the 2026 fiscal year. While the government backs his target for a primary budget surplus in the same year, 65% of economists surveyed by Bloomberg don’t see it being reached.

The Treasury is expected to outline how it will reduce the cost of servicing loans — the fastest-growing expenditure item since 2011. That could include selling a short-dated bond or reducing the size of its weekly auctions for the next fiscal year. It remains to be seen if Mboweni will hold the line on the goal to curb expenditure by about R300 billion over the next three years, mainly by freezing state-worker salaries. That’s after it drew harsh criticism from politically influential labour groups, civil-society organisations and some opposition lawmakers.

With a pay dispute between the government and its workers in court and a new round of negotiations for a multi-year agreement due to start later this year “the minister’s hand would be significantly weakened if he walks back on that,” said Andrew Duvenage, managing director of NFB Wealth Management. Mboweni faces pressure to stretch South Africa’s finances even further by continuing to support beleaguered state-owned companies. The Treasury may now allocate funds to the Land and Agricultural Development Bank of South Africa, responsible for almost 30% of loans to the agricultural sector. A potential restructure of power utility Eskom’s debt and the announcement of a private equity partner for South African Airways would alleviate some of the pressure on state coffers. After South Africa’s economy probably contracted the most in nine decades last year because of Covid-19 lockdowns, focus will turn to structural reforms. That includes steps proposed by the Treasury in 2019 to lift economic growth by 2 to 3 percentage points and create more than one million jobs over a decade.

The cliff is on it’s way and we all know what will be blamed for 26 years of plunder!

Hot air and irrelevant nonsense. Its like giving ZANU-PF a Bill of Human Rights. The cadres just strip it all anyway and 90% of department get qualified audits. Amazes me that people and professionals get hung up on the ‘Budget’

Freezing public servants salaries! You must be joking! The unions will burn down half the country rather than accept that. So I am afraid Mr Mboweni you need to look for savings elsewhere. Why not carry on milking the private sector, they probably will last a few more years for your comrades to loot before doing a “Zimbabwe”.

Dear Minister, if you want to REVIVE an economy….

….you LOWER Income Tax across the board! (…by making it more attractive for business)

Not increase taxes. That way you stifle any economy (…like a man trying to lift himself by the handle , while standing in a bucket)

I think reform & cutting wage bill is what’s needed along with government itself needs to reduce in size along with benefits.

Wrt attracting foreign investors.. they already coming as people prepare for the US bubble pop and decade of QE / MMT like taking impact as China and other central banks innovate out of reserve currency use(see digital currency use with Swift).

Wrt company tax.. no change is good as US will struggle if they don’t push their tax up to our rate ie 28%

Lastly it’s not coincidence that decline in gdp growth happens 2009/10 onward. That’s when things changed and reform needed to happen along with usual disinvestment and cash holding happening when Zuma came into power.

This ironically is why gov pushed more civil world force.. getting out of that will be tricky politically though but hopefully renewed interest in 3rd world/emerging countries assists this. SOE thing.. gov needs to take the hard decision and cut off bad investments .. the Zuma era strategy was just bad.