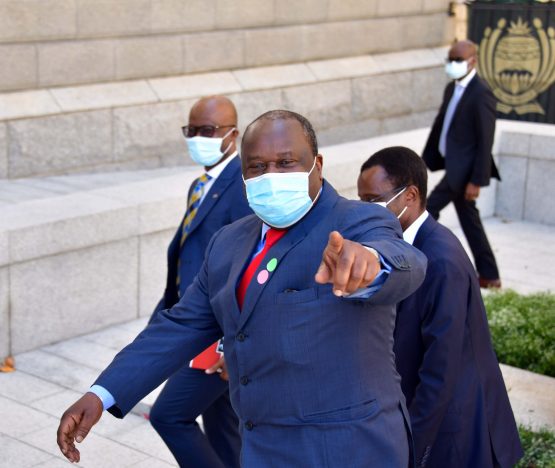 The Public Servants Association, which represents almost a quarter of a million government employees, said they want across-the-board wage increases of inflation plus four percentage points. Talks on a new pay deal began on Monday.

Finance Minister Tito Mboweni last week presented an annual budget that forecast a smaller-than-expected deficit in coming fiscal years. Those targets hinge on the government freezing public-sector salaries over the next three years, with the government proposing a “significant moderation” in spending on wages.

“Government will negotiate on the basis of fairness, equity and affordability,” Mboweni said on February 24. “A pact that exceeds the budgeted amounts would present a risk to the fiscal framework.”

The PSA is currently fighting to get the government to honour a three-year deal struck in 2018 that the state reneged on last year. President Cyril Ramaphosa’s rise to power in 2018 was backed by the party’s powerful labor-union allies that vociferously oppose the three-year moratorium on wage increases.

The PSA is also demanding:

The problem here is that the people who work for a living are outnumbered by those who vote for a living.
This was created knowingly by the ANC and now they have to deal with it. (or rather just let the the average poor sod tax payer deal with it)

Unfortunately studies have shown that to get better results out of employees a carrot in front of them like raises, bonusses etc does not have the intended effect. The biggest driver of results is the fear of being fired! Fire the whole lot of them!

Let economist Mike Schussler explain that our government employees are amongst the highest paid in the world.

Government will call the unions’ bluff and give them a 12% increase.

It’s all about trying to pocket as much as possible, no matter what. The “public servants” are just following the example of the ANC cadres. Take what you can, when you can: max out the state.

More like “max out the free market capitalist taxpayers “!

Madness, so where do unions expect this money is going to come from? Tax revenue for 2020/21 was over R200.0 billion lower than projectioned in the 2020 Budget. While in private sector people have been forced to take pay cuts and been retrenched which means less tax income going forward. Currently public sector salaries make up 47% of the budge and interest costs consume another 22%. Unions need to be realistic about their expectations. Unless they have a change of heart and accept this deal I expect we will face a year of strikes and violent unrest.

Who set the loot example? None other than the powers that be.

As they say, they pluked a lat for their own gats.

Why when dealing with a civil servant at most levels do you get the impression that 1) they don’t give a stuff, 2) they are clueless, 3) Halfwits.

This is the result, no grasp of the situation.

Retrench these SOE parasites and outsource their functions to entities that are performance / profit driven and squeeze every last drop of performance from their employees.

That opening paragraph alone is quite loud.

It implies that Civil Servants are acting out of a working knowledge and insight of their employer that outside people know do not possess nor understand.

That opening paragraph alone is quite loud.

It implies that Civil Servants are acting out of a working knowledge and insight of their employer that outside people do not possess nor understand.