More than 90% of respondents to a survey dissatisfied with prevailing conditions in the sector. Image: AdobeStock

Confidence in the civil construction sector deteriorated in the first quarter of this year to its second lowest level on record.

The FNB/Bureau for Economic Research (BER) civil confidence index released on Thursday revealed that confidence in the sector slumped by 40% to nine index points on a 100-point scale from an already low 15 in the fourth quarter of 2021.

The record low of five index points was reached in the second quarter of 2020, which was during the hard Covid-19 lockdown.

The latest index level means more than 90% of respondents to the survey are dissatisfied with prevailing conditions in the sector. FNB senior economist Siphamandla Mkhwanazi said it is discouraging that sentiment in the civil construction sector remains so weak while confidence in the broader economy is improving.

Mkhwanazi attributed the slump in confidence to activity levels in sector and project award delays.

He said activity levels, unlike confidence, improved marginally in the first quarter of 2022.

Statistics SA reported that the real value of civil construction works contracted by 3.9% year-on-year in fourth quarter of 2021.

Mkhwanazi believes a similar, if not less severe, decline is likely this quarter.

“Although stable, the level of construction activity is still well below previous highs. This prolonged period of weak activity is likely taking its toll on the business mood of civil contractors.”

Mkhwanazi said the amount of time it takes after tender submission for projects to be adjudicated and awarded is also weighing on sentiment in the sector.

“While the survey doesn’t explicitly ask this, a rising number of respondents commented that the delays in project awards are inhibiting growth in the sector.” 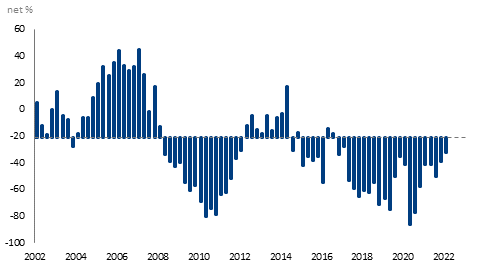 “Civil construction activity is much more dependent than other sectors on public sector spending,” he said.

FNB/BER said respondents to its survey are very upbeat about prospects for the civil construction sector in the next quarter despite the negative outcome for confidence.

It said expectations for activity and profitability point to a marked improvement, but highlighted that historically respondents’ expectations have been an inaccurate measure of actual future performance.

Mkhwanazi concluded that overall, even after years of decline, “the odds remain stacked against a meaningful recovery in the civil construction sector during 2022”.

SA Forum of Civil Engineering Contractors (Safcec) CEO Webster Mfebe said the low confidence levels of the civil construction sector are consistent with the economic performance of the construction industry.

Mfebe said the contribution of construction to South Africa’s GDP declined by 2.2% in the fourth quarter of 2021 and by 1.9% in the 2021 calendar year.

He said the construction industry was the only industry whose contribution towards the overall 4.9% GDP growth declined in 2021.

Mfebe said these figures are reflective of the lived experience of contractors and is due to a decrease in residential, non-residential, commercial and construction works.

“That lived experience affects confidence in the sector. The construction industry has been in a downward spiral. There has been a gradual decline in the value add of construction to GDP in the past five years from R109.6 billion in 2016 to R82.9 billion in 2020,” he said.

Mfebe said this problem has been partly caused by delays in awarding contracts, with state entities such as the SA National Roads Agency (Sanral) recently delaying the award of tenders worth more than R20 billion.

“I’m told this is because of ‘over scrutiny’ because of the Zondo Commission [into State Capture] and now they want to make sure there is proper due diligence.

“Good as that may seem, it is holding back economy activity and having a ripple effect on the economy because of the high multiplier effect of job creation in the construction industry in the economy.

“South Africa has not been able to make a dent in inequality in the country since 1994, which is a problem because the solution is the rollout of infrastructure investment in the country,” he said.

Mfebe said in terms of the National Development Plan (NDP), South Africa had set an ambitious target of fixed investment accounting for 30% of GDP by 2030 but it currently contributed 14% to GDP.

“There is no hope on the horizon that we will be able to achieve that level of investment because of the slow rollout of public infrastructure investment plans.”

Mfebe said the licensing and permitting system is also limiting the ability of the private sector to get economic projects off the ground while the non-payment by government of invoices within 30 days, as stipulated by National Treasury, is impacting the civil construction sector and putting a damper on confidence levels.

The construction sector is the canary in the coal mine for the future health of the economy. The graph shows that the canary is suffering cardiac arrest.

and, I am guessing that, with agriculture, the biggest employer and, as regards cost per employee, right down at the lower end of the cost bracket. The ANC will not release infrastructure project capital and wants to EWC farms; all to keep their fatcats employed and maybe score some free land. Simple venal self interest; sabotage for the economy and job seekers.