Protestors pictured on February 1 outside the Soweto Theatre, where Nersa held a public hearing about Eskom's application for an annual 15% tariff increase for three years. Picture: Moneyweb

Eskom general manager for group technical Titus Mathe disclosed to Moneyweb on Friday that the cost to fix “design defects” at Eskom’s new Medupi and Kusile power plants could be as high as R8 billion.

This comes after Eskom CEO Phakamani Hadebe gave a cost estimate of R1.5 billion in November, and Bloomberg reported last week that Eskom had put it at R2 billion in an emailed response to questions.

Speaking at a National Energy Regulator (Nersa) public hearing about Eskom’s application for a tariff increase of 15% per annum for the next three years, Mathe said the Medupi and Kusile units that are in commercial operation are significantly underperforming and might take years to fix.

In a video interview with Moneyweb afterwards. he said the cost could amount to R8 billion. Eskom would try to recover this from the contractor through a claims process that Mathe acknowledged could be lengthy and complex.

He told Moneyweb the R8 billion has already been included in the current planning for funding drawdowns and should not result in a further increase in the overall budget to complete the projects.

Fixing the new plant is the first priority on Eskom’s nine-point recovery plan, he said.

At Medupi three units are currently in commercial operation.

Unit 6, which was the first to be completed, seems to be underperforming significantly. It was taken out of service for three months last year after unplanned outages on the unit exceeded 40% in August. 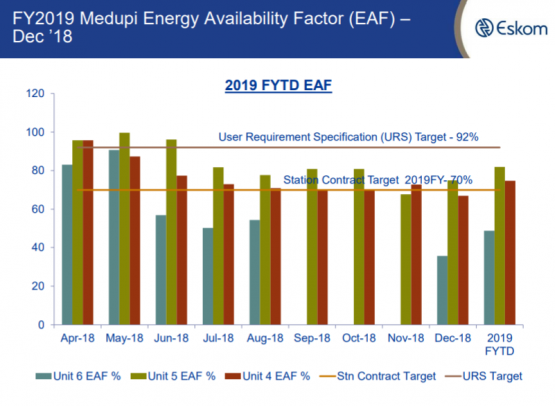 According to Mathe, the outage was for inspections in terms of the guarantee agreement but was extended to attend to problems with the spray water flow. “The contractor proposed some solutions which Eskom is currently evaluating,” he said.

Since the beginning of the financial year on April 1, there have been a total of 66 unit trips at Medupi’s three commercially operating units. Only one of Kusile’s six units is in commercial operation, and it is performing at an energy availability level of below 50%, Mathe said. It has had 18 trips so far this financial year. He said most issues are common to both Medupi and Kusile and are technical or design-related, or process or people-related. Several of these issues are also impacted by poor quality coal.

The boiler design results in high temperatures at the reheater stage. The spray water system is unable to cope under certain operating conditions, which results in trips.

Other problems at the plant include excessive wear of bags and ash accumulation due to the design of the fabric filter plant. This results in frequent bag replacements, ash blockages, trips, load losses and emissions-related load losses.

At the milling plant none of the mills in commercial operation meet the technical requirements, Mathe said. They require servicing every 8 000 to 12 000 hours, which is half the design period. This means the plant has to be taken out of service more frequently for planned maintenance.

The gas heater performance and fouling does not meet the requirements in terms of temperature gradient, erosion, failures and ash carryover to clean air sides.

At the dust handling plant there is high ash accumulation as well as leaks, poor commissioning and lack of spares due to business constraints at the original equipment manufacturer (OEM). The plant requires more frequent maintenance, Mathe said.

Hardware failure in the distributed control centre causes plant trips and the performance does not meet technical requirements. Mathe said the corrective maintenance programmes are ineffective.

There are high vibrations on the generator auxiliary cooling loop as a result of undamped connections to the turbine.

Mathe said specialist Eskom technical teams have been assembled to develop solutions and workstreams with contractors to jointly evaluate the solutions.

He told the public hearing that the design defects were detected after the plants were commissioned.

Mathe said the designs were done around 2006/07; Eskom would have wanted more time to do tests with real coal at the time, but due to the delay in the decision to build the new power stations, there was not enough time upfront.

He said Eskom will spend the next six months deciding how to fix the problems. Thereafter, negotiations with contractors about the proposed solutions and the allocation of costs could take another 18 months.

When the actual work starts after about two years, one unit would have to be taken out of operation – for two to three months at a time  – before all 12 would be operating optimally, Mathe said.

The Nersa panel asked Eskom to revert with more information about problems at its other new power station, the Ingula Pumped Storage Scheme.

These guys should write the book on how to successfully destroy a flagship utility in 20 years !!!!!!

death and taxes 1 year ago

how embarrassing that one could have built 3500 x 2MW wind turbines installed for cheaper than this non working Medupi coal power station.. and wind turbines are expensive! Another fine Hitachi (ANC) run business where no one is ever held accountable but always gets paid.

Thinking along the same lines. The combined cost of Kusile & Medupi is somewhere around R292bn (if not more.) SA has the most expensive coal-fired power station in the entire world. SA seems to be a filthy rich country.

Well if we said lets use the Kusile & Medupi R292B for grid tie only PV daytime generation and keep the other coal stations for night-time etc.

I just worked out, panels and inverters all included for our 35KW plant at the office works out to around R8K per KW , now grid scale would mean bulk pricing and that would come down considerably, but nonetheless lets use R8K.

The problems started with First Strut. From there it only escalated. I’m convinced that this R8bn also includes sufficient fat to feed some fat cats in the system as well.

Years late and not even designed correctly. Such an ANC success story.

Eskom staff should receive no increases and there should be no tariff increases until all efforts have been made to collect the unpaid debtors book by no later than 30 April 2019(that is right before the ANC gangsters try get re-elected).

Municipalities owe a fortune and will not pay. So either collect the cash or write it off-( more likely) and if written off disconnect for a minumum of 3 years.

It is totally unfair for a lower middle income person in say Plumstead to have a prepaid account(with increases) while Soweto residents pay nothing.

ANC engineers doing what they do best…destroy

I am glad they were able to narrow the problem down to design, people, process or coal issues. Well done.

I think the problem with these plants has always been that instead of one big contract, they split the contract into each sub-component. In theory you can save a bit but the amount of risk you introduce is enormous and has obviously been handled very poorly. I suspect they took that route because it is easier to get kick backs from many contracts vs one big contract.

Of course, trying to claim anything now will be a nightmare as contractors can point at each other and finding who is liable will be challenging.

So well done Eskom, worst coal plant build on the planet ever I suspect.

All under the watchful eyes of ….Brian Dames and….Malusi Gigaba!

My god, the thing is brand new and now because of corrupt ANC cadres we need to fix Medupi, Kusile at a ballooned of R8bn????

So, what you are actually telling us is that Medupi and Kusile have more value as scrap metal, than what they have as power plants?!!

Well, it is to be expected, because the project manager, Luthuli House, is more valuable as a dumpsite for manure than as the head office of a political party.

“…most issues are … technical or design-related, or process or people-related”.

Em, ok, either you don’t know what is wrong and you are just guessing, or everything is wrong.

I’m going to exaggerate (a bit), but I think if the industrial might of the Chinese would’ve been tasked to construct a new power station in SA, they would ask our Govt if they prefer it to be constructed “in the morning” or “in the afternoon”? 😉

I think now i understand why Helen Zille is calling for a TAX Revolt. Government(ANC – BEEEEEEEE) and this example Eskom clearly cannot manage any project successfully as it is too lucrative to be over time over budget. Based on this debacle of these power stations…why would anyone want to continue feeding all these blood suckers by paying your taxes and increases in electricity.They should pick the best of the 2 power stations and get the original contractors to fix problems they created with no more charges and if they dont want to fix it then they must refund the monies for another engineering company to complete the job. Tough luck…. taxpayers are no more willing or even able to supply the easy money that was squandered in the past. JUST FIX IT!! JUST DO IT ! DO IT RIGHT THIS TIME WITH PAYMENTS ALREADY RECEIVED!

Understanding the cost of electricity from Medupi, Kusile and IPPs

Understanding the cost of electricity from Medupi, Kusile and IPPs