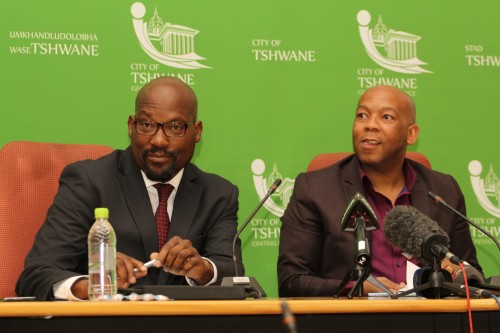 Then-city manager Jason Ngobeni and ANC mayor Kgosientso Ramokgopa at the announcement in May 2015 that the City of Tshwane would end its controversial smart metering contract with PEU Capital Partners. Picture: Moneyweb

Advocate Gilbert Marcus SC on Thursday admitted that his clients might face claims on the basis of unjustified enrichment related to their smart metering contract with the City of Tshwane.

Marcus was representing PEU Capital Partners and its implementing agent TUMS in the hearing of business grouping AfriSake’s review application in the North Gauteng High Court on Thursday.

AfriSake is asking the court to declare several agreements that constitute the deal to be inconsistent with the Constitution and therefore invalid and set them aside.

The court is expected to announce its ruling with regard to the validity of the contracts on Friday.

The City of Tshwane is a respondent and opposed the application earlier. After the Democratic Alliance took over the city government from the ANC in August 2016 it however withdrew its opposition and now supports AfriSake’s case.

On Tuesday the three presiding judges requested the parties to try to settle the matter, but no settlement was reached and therefore the hearing proceeded on Thursday.

Advocate Ettienne Labuschagne SC for the city told the court that following a proper and competitive bidding process, Tshwane appointed PEU in February 2012 as an advisor to a panel dealing with alternative ways to improve the city’s revenue. It was a R2 million-a-year contract and PEU was to be paid R2 150/hour.

A month later in March then-ANC mayor Kgosientso Ramokgopa announced that the city would embark on a massive smart electricity meter rollout and in May the city, in a carefully-worded document, asked PEU for a proposal to optimise its revenue. That became the smart metering project.

In October that year PEU was appointed as service provider for the smart metering project despite express legislative provisions barring consultants to also be service providers on the same matter.

Labuschagne said the MSA and the termination agreement and Interim Service and Transfer Agreement (ISTA) the city later concluded with PEU are interrelated. The terms of the ISTA in fact provided for the revival of the MSA, should the ISTA not run its course.

The city entered into the ISTA and termination agreements after Ramokgopa in May 2015 conceded that the city could not afford the contract. In court it was disclosed that Tshwane’s current payments to PEU may be as high as R5 million per day.

Labuschagne said the later agreements constitute a continuation of a procurement process that lacks validity. There is a domino effect that strikes them all, he said.

“The invalidity is a hot potato being passed from one contract to another, but the buck stops somewhere and our submission is that it stops here in this court,” he said.

Advocate Cedrick Puckrin SC for AfriSake said even if the court rejected the city’s argument about the domino effect, the ISTA assessed on its own also lacked validity. He pointed to several instances of non-compliance with the relevant legislation and supply chain management policy.

Puckrin pointed out that the Tshwane City Council approved an off-balance sheet agreement in which a third party who would replace PEU as service provider, would take over PEU’s infrastructure at a cost to be determined by an independent evaluator.

Instead, the agreement that was concluded was an on-balance sheet one and resulted in a R950 million liability for the city that was not budgeted for at the time.

The council resolution provided for the 10c/rand reduction in PEU’s commission to 9.5c/R, but was silent on the fact that that 10c would be paid into an escrow account to be used to pay for the PEU infrastructure under certain conditions.

Marcus told the court the MSA was dead and replaced by the ISTA. The question of the lawfulness of the MSA was therefore moot, and it was unnecessary for the court to deal with it, he argued.

He said his clients don’t want to cling to the smart metering project. They will continue rendering the service and not leave consumers without power supply. Their only interest in the matter is to get the R950 million payable for their infrastructure in terms of the ISTA.

He said if the judges found the agreements to be invalid, they have broad discretion in deciding on a remedy. They need not set the agreements aside, he argued and pointed out that such a step might have disastrous effects on an “innocent bidder” and the public.

In his response Puckrin questioned the contention that PEU is an innocent bidder. He said while he does not suggest any fraud or dishonesty, PEU’s conduct was unreasonable. He said the group was appointed as financial experts and should as such know the procurement policies and should have advised the city in this regard. “Anybody with the acumen PEU should have had, should know a conflict is a conflict,” he said, referring to the advisor becoming the service provider.

The parties spent some time discussing possible remedies. One of the options Marcus proposed, should the court find the ISTA to be invalid, was for PEU to continue delivering the service in the interim. He however insisted that it should be at the current 9.5c/rand vended through the system. He rejected the city’s argument that it should be done at cost, following the principle that unlawful contracts should not be profitable.

Marcus stated that his client may eventually face claims on the basis of unjustifiable enrichment.

The court is expected to make its ruling on the validity of the contracts on Friday, but to ask for further submissions on what would constitute a just and equitable remedy.

Everywhere in the world the Governments and the municipalities run the country. In South Africa because of the corruption, theft, dishonesty, manipulation, bribery etc. that is entrenched everywhere, every decision made appears to be referred to the courts for ratification. So, is the overpaid, overfed, and over priced judicial system with its lawyers, advocates and our judges running the show?

Yes, you may say this is a case for the courts to decide, but so is everything else.