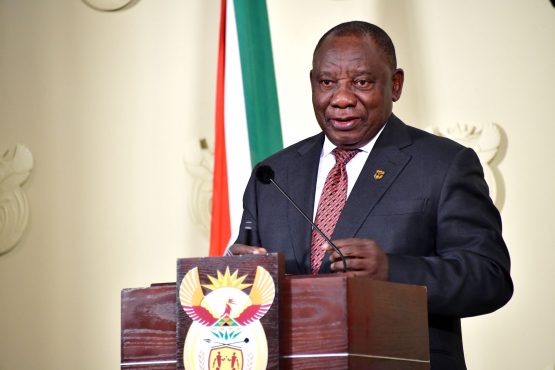 President Cyril Ramaphosa has taken the unprecedented step of declaring a national disaster in response to the rapidly spreading Covid-19 virus.

This move enables him to close schools until the end of the Easter holidays, prohibit gatherings of more than 100 people, and close 35 of the country’s 52 land border crossings.

It also permits him to ban travel from countries most affected by the virus, such as the UK, Italy, Iran, South Korea, Germany, Spain, China and the US from Wednesday (March 18).

Government decided to institute these measures during a cabinet meeting on Sunday after 61 South Africans contracted the deadly virus, which has so far killed about 6 500 people and infected some 162 000 people around the world, according to the World Health Organisation.

At a press conference in Pretoria on Sunday night, Ramaphosa said declaring a national disaster was not an easy decision to come to, but that government had little option: “This situation calls for an extraordinary response; there can be no half measures.

“As we have said before, the current circumstances require extraordinary measures to curb the spread of infections. Countries that have heeded the call to implement these radical measures have fared much better than those than do not.”

Invoking the Disaster Management Act, he said, will enable government to respond with an “integrated and coordinated disaster management mechanism that will focus on preventing and reducing the outbreak of this virus”.

“We will also be able to set up emergency, rapid and effective response systems to mitigate the severity of its impact.”

This response will require all travellers who have entered SA from high-risk countries since mid-February to present themselves for testing. He also encouraged South Africans not to travel abroad.

The government will also strengthen surveillance, screening and testing measures at OR Tambo, Cape Town and King Shaka international airports. Two of the eight seaports will be closed for passengers and crew changes.

Ramaphosa also said gatherings of large numbers of people will be banned. This means events like the Two Oceans Marathon, the Cape Town International Jazz Festival and the World Football Summit set to be held in Durban have either been postponed or cancelled.

The large-scale restrictions on the size of gatherings are the first to be implemented since SA became a democracy in 1994.

Aside from the restrictions on travel and gatherings, Ramaphosa also called on the public to be more hygienic and to:
• Wash their hands frequently with soap and water or hand sanitisers for at least 20 seconds;
• Cover their nose and mouth when coughing and sneezing with tissue or flexed elbow; and
• Avoid close contact with anyone with cold or flu-like symptoms.

Government has also established a National Command Council chaired by Ramaphosa to manage the crisis.

“This command council will include, among others, members of the inter-ministerial committee, and will meet three times a week to coordinate all aspects of our extraordinary emergency response.”

Ramaphosa said cabinet is also in the process of finalising a comprehensive package of interventions to mitigate the expected impact of Covid-19 on the economy.

“This package, which will consist of various fiscal and other measures, will be concluded following consultation with business, labour and other relevant institutions.”

If first world countries with functioning government departments and healthcare systems like Italy have a hard time coping with Coronavirus, I cannot see how the non-functioning SA government who cannot even supply electricity and water would be able to cope with it.

‘No half measures’??- Had Cyril done the same thing with ESKOM whilst he was part of the Eskom war room a few years ago perhaps South Africa would have been in a better position today?

“Ramaphosa said cabinet is also in the process of finalising a comprehensive package of interventions to mitigate the expected impact of Covid-19 on the economy.”

Will your travel insurance cover you for Covid-19?

Will your travel insurance cover you for Covid-19?