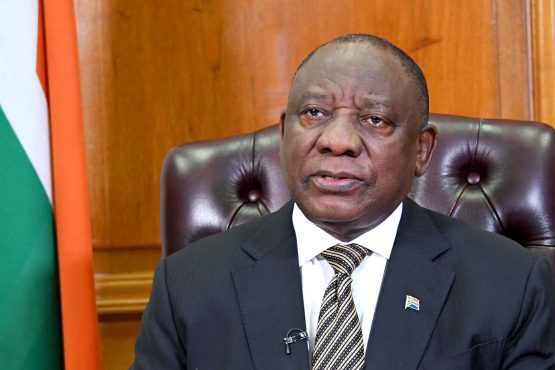 A tired-looking President Cyril Ramaphosa had some good news for South Africa in his latest address on the Covid-19 crisis on Monday night.

Not only had the country received its first million consignment of the Covishield vaccine which arrived from India earlier in the day, but the infection rate had also dropped to a level where some lockdown restrictions could be lifted.

Though SA is still under “adjusted Level 3” lockdown, the beaches, dams, rivers, parks and public swimming pools can now be reopened.

Also: “The sale of alcohol by licensed premises for off-site consumption will be permitted from Mondays to Thursdays, from 10am to 6pm.”

The curfew can also now be relaxed, and will be in place from 11pm to 4am, with businesses able to close at 10pm, instead of 8pm.

All of these restrictions were possible because of a drastic fall-off in the infection rate.

“In the past seven days, the daily average of new infections was around 5 500, compared to just over 10 000 infections in the previous seven days.”

Though SA is making progress when it comes to tackling Covid-19, Ramaphosa cautioned against not taking efforts to restrict the spread of the virus (like wearing a mask and maintaining social distancing) seriously or there could be a third wave infection.

“It is up to us not to let down our guard, and to prevent a third wave of infections. It is up to us to protect ourselves, our families and our communities.”

The president did not explicitly say it, but the country is now in a race between an emerging possible third wave and the rapid rollout of the vaccine.

Ramaphosa said the country has made progress in sourcing vaccines, but was not clear about how many doses have been acquired or precise dates regarding the distribution of the vaccines.

For example, he said 1.5 million doses were secured from the Serum Institute of India but it is unclear if this part of the 12 million doses from the global Covax facility.

He also mentioned getting nine million vaccine doses from Johnson & Johnson, 20 million from Pfizer and seven million bought by MTN on behalf of the country.

If all these doses are added up, SA will easily reach 40 million, the figure widely regarded where the country will reach so-called “herd immunity”.

Ramaphosa, however, did not speak like the country had acquired enough vaccines.

“We will leave no stone unturned in our efforts to make sure that enough vaccine doses are secured to reach population immunity in our country,” he said.

You don’t have to take it

He was also unclear on the roll-out of the vaccines, only saying that it will happen in three phases, to which he gave no timeframe.

He did reiterate that healthcare workers will be first in line after the vaccines have undergone evaluation.

“Now that the vaccines have arrived they will be tested at the National Control Laboratory to confirm that their integrity has been maintained during transportation. After testing, they will be distributed across the country to thousands of our healthcare workers who every day put their own lives at risk to save others.”

Though Ramaphosa did not give away too many details on the distribution of vaccines, he made it clear that people have the right to refuse to take it.

“Nobody will be forced to take this vaccine. Nobody will be forbidden from travelling, from enrolling at school, or from taking part in any public activity if they have not been vaccinated.”

o’Cyril is absolutely useless, like a snail stuck in oil. He is part of the ANC that takes no action against known criminals in its ranks.

As for me, I never even watched his ‘family meeting’ – surely the leader of a country should know the basic population statistics! There are 39 million adults (over 18yo – COVID vaccines are not approved for under-18’s) in SA. They plan to vaccinate 67% of ‘the total population’, equating to 40 million.(Problem already!) At least 30 % of these won’t want to take a vaccine (according to some recent studies it’s closer to 40%, but let’s assume 30%). So that leaves 28 million. How does somebody expect me to watch his speeches if he (and the rest of his cabinet) cannot even do basic arithmetic….

I must admit I went back to Netflix the moment he encouraged us to avoid confined spaces and get out into the fresh air………….

What ever gives a “leader” the right to stop citizens from earning a living? Many with children??

What is a good enough reason??

A few drunks that don’t behave?? (Where are the police) Not having allowed for enough hospital beds??(Taxpayers paid fir it though)

How is this good enough reason to stop people from earning a living?? Just think about it for a minute.

The fact that he thinks it is good enough reason shows the mentality. Typical anc. Does this not make you the enemy of the people when you attack their livelihood and then try and defend it??

Mmmm you forget that he and the thieving cadres all miraculously get paid on time once a month without fail for doing nothing. It just happens’ no collecting money owed to them, no purchasing stock, no spade work, no sleepless nights worrying about debtors and creditors, demand and supply, no worrying about staff, will or won’t they agree/sign the deal, nope, none of those unimportant things just that 5 to 6 figure number at the end of every month into the bank.

“Doing nothing”, allow me to flesh that out, politicians do nothing, just their mouths flap now and again.

I think Cyril is showing fatigue to the whole Covid hysteria

Whatever.the damage has been done.

And still not a single word about the obvious and massive spreading agency, the holiest of the unholy, the goddam taxi “industry”. Unregulated, run by an elite group of murderous mafia-type individuals and allowed to disregard all and flaunt it just like the elite political rubbish that spews their deceptions upon us all most every day and that only have any genuine regard for themselves.

So I can now go to the beach, and pick up my bucket & plastic spade that I left behind earlier? No one will arrest me?

…the skippers’ license for my SURF BOARD expired during lockdown. I would be surfing illegally then.