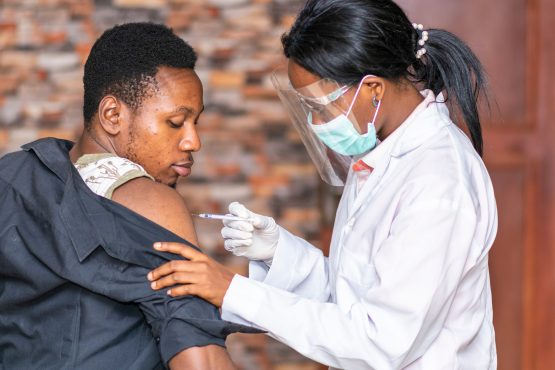 Over the past year or so, ordinary people have learnt a lot about viruses, vaccines and the immune system. We have all had to digest a lot of complex specialist knowledge about how safe and effective Covid-19 vaccines are.

But one important – and positive – aspect of the vaccines hasn’t been well communicated. The statistics about Covid-19 vaccine efficacy have only focused on one aspect of immunity: antibodies. But there’s another aspect too: T-cells, a key part of our immune systems. And the good news is that the current vaccines stimulate your T-cells to fight against both the SARS-CoV-2 virus and its emerging variants in the long term.

The immune system protects us from various infectious diseases, caused by bacteria, viruses, fungi or parasites. To do this, it first determines what type of infectious agent, or pathogen, is causing the infection. Then it mounts an appropriate response. Crucially, at the same time it produces memory cells that can recognise the same pathogen in future. That sets the immune system up to fight potential reinfections.

If the immune system determines that an antiviral response is needed, it launches a combination of two kinds of immunity. One is mediated by antibodies and the other is mediated by T-cells, or cell-mediated. The antibodies bind to viruses and neutralise them, preventing them from infecting cells. Meanwhile, T-cells kill cells that have already been infected by the virus.

While both kinds of immunity are important in fighting viruses, cell-mediated immunity is far more effective at eradicating viruses and more durable. This is important in the continuing fight against Covid-19.

Research has already established that cell-mediated immunity is a powerful weapon against human coronaviruses, the family including SARS-CoV-2. A 2016 study showed that T-cell immunity against the SARS-coronavirus persisted for up to 11 years. It provided complete, effective, and lasting protection against SARS.

Our own recent research argues that a greater focus should be placed on the development of vaccines that are capable of producing antibodies, but would predominantly elicit a cell-mediated immune response against SARS-CoV-2 and its variants.

And, though most people don’t know it, the existing Covid-19 vaccines offer a resilient cell-mediated immune response.

It’s not just about antibodies

Traditionally, most vaccines contain only a small part of the pathogen. This prepares the immune system by mimicking the natural infection.

The current Covid-19 vaccines used in South Africa contain small portions of the wild-type SARS-CoV-2 spike protein – this coronavirus was responsible for the initial Covid-19 outbreak and spread during the early stages of the pandemic.

But, as the pandemic progressed, the virus mutated. Mutations in the spike protein confer certain selective advantages to the virus. Some of these mutations have made the virus easier to transmit, or helped it to escape the immune system. The emergence of variants has raised concerns over the effectiveness of the existing Covid-19 vaccines.

During the course of the pandemic, news reports and press releases have informed on the efficacy and effectiveness of various Covid-19 vaccines against emerging variants. But reports have focused almost exclusively on the ability of the vaccine-induced antibodies, and how effective they are at neutralising the variants.

This focus on antibodies means that any news of decreasing antibody efficacy against emerging variants is seized upon as evidence that vaccines may not work well in the long term. This can foster a lack of trust from the public in the science behind the design of Covid-19 vaccines. And this lack of trust could contribute to vaccine hesitancy. After all, some might argue, why take a vaccine that appears less effective against each emerging variant?

In fact, several recent papers have demonstrated that while SARS-CoV-2 variants could escape neutralising antibodies, the cell-mediated immune response induced by most currently used Covid-19 vaccines is very resilient and remained effective.

While antibodies induced by the vaccine were able to bind to the variants, they were less capable of neutralising them. The T-cells, on the other hand, were largely as responsive to the variants as they were to the wild-type virus. They were still able to recognise and respond effectively to the variants, conferring resilient protection against the disease.

To date, only Johnson & Johnson has released a media statement that includes statistics about both kinds of immune responses induced by its vaccine.

Research shows that antibody levels produced from different vaccines decrease over time and, although immunity varies from person to person, immunity from the Pfizer and the Johnson & Johnson vaccines typically last for at least six months.

Vaccine hesitancy is a major hurdle in fighting the pandemic. A recent survey showed that only 72% of South Africans were willing to be vaccinated against Covid-19.

The idea that “the vaccine will be ineffective” was one of the most common reasons people gave for vaccine hesitancy. Hesitancy isn’t surprising if people hear only about how part of the immune response becomes less effective against emerging variants.

Public trust in the vaccine relies on people understanding the complete efficacy of the vaccine-induced immune response and communicating the statistics about both kinds of responses to the variants. The existing Covid-19 vaccines offer a resilient cell-mediated immune response. Knowing this can help people make an informed decision about vaccination.

In their paper the authors discuss the merits of possible future use of T-Cell based vaccines and conclude that “Less conventional treatment approaches should also be given attention and might not only advance therapeutics for COVID-19 but be extended to other infectious diseases as well.”
They do not make the claims of this article that existing jabs are already equipped to be the thing that they desire to investigate.
Accordingly this is a false representation of this work by the authors and as such it is the subject of legal concern.

Do you even read the stuff you type? Do you think saying such obvious lies helps your ’cause’?

Click the link to the “research” and read it. Then read my comment again. You have clearly missed the point by a mile. Indoctrinated fear can do that. It can turn ordinary jabber jockeys into nincompoops.
The research seeks to look further into the issue of improving efficacy which the article then claims is already being applied in the current products. The claim in article thereby conflicts with the supporting research work. They cannot both be correct and it is the article that has obviously been made to create the false claim regardless of the conflict.

I have replied to your slander but you people keep blocking my posts. Clearly my reply will show you up for what you are.

People who survived the 1918 Spanish flu had immunity against it even 80 years after the event.

What is more is, the spike protein on its own, without viral load is pathogenic, being found to be thrombotic in most parts of the body, including heart, lungs, lymphatic system, endocrine system, even being able to cross the brain barrier, where it became thrombotic.

The way I look at it is if people want to take the chance of getting infected to achieve natural immunity then so be it. There will be people who do not survive and that’s the chance you take but if you do survive then you will be immune, if you also get one shot of the Pfizer jab you will be super immune (according to this study)

So I think eventually we will achieve herd immunity it’s just down to whether you are willing to be infected or to be vaccinated to receive that protection.

What is the point of comments here? Nothing to report says Big Brother.

What is the point of comments here? Nothing to report says Big Brother.

Natural T-cell immunity from previous infections is just as valid. So anyone who has already had covid can rest easy.

I LOVE how your story has changed. Before it was all a big gov plot. Now you are safe because you had it. Your lot is a bit of a joke.