Cyril Ramaphosa’s honeymoon is officially over 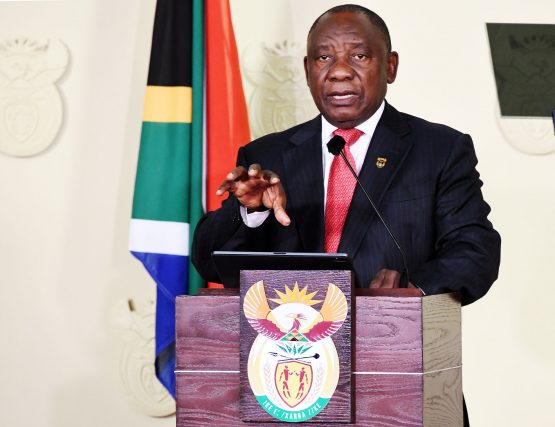 His ascension to national leader in February last year was greeted with so-called “Ramaphoria,” as the rand and government bonds surged on expectations he would reform the struggling economy, crack down on corruption and replace non-performing cabinet members. Much of that rally was relief at seeing the end of Jacob Zuma’s nine-year tenure marked by corruption and few policy decisions.

Missing person report , Name “ Ramaphosa “ last seen at state of the nation 20 June . Cyril please we know you only be in power 60 days but its actually time to start cleaning up this ANC mess . pic.twitter.com/X3HtKuXfIT

Patience for change in the business community is running out. Some key corporate figures say the cabinet Ramaphosa named after his May election victory hasn’t brought in enough fresh ideas, while his state-of-the-nation address in June was seen as full of feel-good spending pledges and no detail on funding.

“Very tough decisions have to be taken. We have not yet seen any willingness to take those decisions. Time lines are short and pressures intense,” said Martin Kingston, executive chairman of Rothschild & Co’s South African unit and vice president of the country’s main business lobby. “As a country we want to have our cake and eat it, and everyone else’s cake.”

While Ramaphosa vowed to save the struggling state power utility, he also promised bullet trains and a new city. That’s in a nation where most municipalities struggle to provide basic services like housing and sanitation, and after South Africa’s economy posted its biggest quarterly contraction in a decade. The last-remaining investment grade rating at Moody’s Investors Service is under threat.

Kingston’s sentiments were echoed by three chief executive officers of large companies and a senior business association leader, all of whom declined to be identified as their organisations haven’t publicly commented. They all said Ramaphosa had been forced to compromise because of his narrow victory in a 2017 party election the opposition he faces from a faction within the ruling ANC that’s still loyal to Zuma.

Chief among the business leaders’ concerns were the appointments to head the education and labor ministries. Both posts are seen as key in a nation with one of the world’s worst-performing educational systems, a gaping skills shortage despite a 27% unemployment rate, and rigid labor laws that make it difficult to hire and fire workers and have boosted the power of labor unions.

Angie Motshekga, who has run the education portfolio since 2009, was reappointed to the post, while Thulas Nxesi, a former leader of the main teachers’ union, was moved to the Ministry of Labour and Employment. Nxesi had been criticised for defending irregular government spending on Zuma’s private home while he was public works minister. A union leader is unlikely to ease labor laws to make it easier to do business, the business leaders said.

Ebrahim Patel, who’s economic development role was expanded to include trade and industry, had been criticised by some corporate leaders for intervening in the takeover of local retailer Massmart by US giant Wal-Mart to demand concessions.

Even two appointments that have been welcomed by business — bringing back Tito Mboweni as finance minister and Pravin Gordhan to public enterprises — are seen as short-term postings.

Mboweni has said he doesn’t want to stay in the position for too long and Gordhan, 70, has been attacked by the opposition Economic Freedom Fighters and the country’s anti-graft ombudsman for decisions, while heading the South African Revenue Service a decade ago. Even though they are regarded as sound economic choices, few major reforms have been made since they were first appointed last year.

Concern over the cabinet among the business leaders was compounded by Ramaphosa’s spending pledges in his June 20 speech. While he pledged to accelerate R230 billion in support for Eskom, he didn’t mention the job cuts and efficiency improvements the utility’s management says are needed.

Christiaan Schutte, the CEO of South Africa’s biggest poultry producer, Astral Foods, was “flabbergasted” by talk of bullet trains and new cities when municipalities can’t provide basic services. In May, Astral said the inability of a municipality to supply one of its plants with water would cut profit by 85 million rand.

Read: Is Ramaphosa in charge?

Of the 28 ministers Ramaphosa appointed, only six hadn’t served in cabinet before.

“We have many of the same economic players in similar or expanded portfolios,” Kingston said. “However, we don’t necessarily want the same policies. We have high hopes for meaningful change and urgent decision-making and action.”

the end is near

The problems are not actually with the ministers it is with him.

He is not in charge and unfortunately just a well spoken puppet.

Only good for giving free stuff away and forcing the middle class to pay for it. He also makes a very convincing story teller but foreigners like locals will soon realize this. Maybe they have already.

Just saw a SENS fro Arcelor Mittal. They will restructure and pay off more than 2000 people.

We seem to be on the back foot here don’t we.

60 days and we expect miracles. Get real
Give our President a chance. We all need to believe in South Africa again because we have no alternatives. While we are on the point of pointing fingers what about the corporate cockroaches who have imperilled SA just as the Zuma scum have.
The Zuma scum will fall on their swords as the legal system will close in on them and we will be rid of them forever.

The president? Well, he is the most trustworthy by far, but he did not repay the loan he received from Lonmin. Lonmin even gave him the money to service the debt, but he even used that for other purposes. This bad loan basically bankrupted Lonmin.

So, I ask you again. Is there any person in government who is trustworthy? Anybody? Just one! If you can’t even trust the president, who can you trust?

The shocking reality is that everybody who invests in government bonds is in fact lending to Luthuli House….without collateral. Every member of a pension fund is lending his hard-earned money to delinquent borrowers.

Understand one thing – SA is just moving to the African norm. They are happy with all this mess otherwise you would not put ANC back in charge. You get this with poorly educated puppets or indoctrinated puppets ( Nats did last )
The first world standards for some of us is history – wellcome to third class African standards, look north to see what I mean

Please remind me who Zuma’s number two was when all the looting was taking place.

If business is frustrated think of the electorate!! More than 6 MILLION people are hungry in this sad country. Millions more do not have adequate housing, health services, security, employment or education and worst of all the rich and skilled young folk ( job and economic growth creators) are fleeing these shores in droves compounding the problem.

The ANC has ruined the country and Mr Ramaphosa and the fat pharmacist sat and nodded while the former number 1 destroyed the country.

The 57% election margin have put the ANC to sleep again, their jobs secured.

The composition of the new cabinet shows that the “unity project” is still ongoing, to secure the place of the cadres on the gravy train.

The economy will not fire before the split in the ANC takes place. The trade unions and the left are blocking every move of CR, so, it is more of the same.

Hes an ANC insider, he was Zuma’s deputy, he’s ANC royalty – why does anyone think that the ANC will fix the ANC? It’s like expecting an alcoholic to fix another alcoholic! Negative. He’s the same poison, just in a prettier bottle

You’ve got a chance with the alcoholics… But the ANC.. never!

It’s not only Astral Foods – see what happened to a dairy company in Harrismith – could have been Clover – when they regularly paid their electricity bill but the dysfunctional ANC municipality collected the money only to fail to pay it over to Eskom! The dairy product factory had no power! It’s the biggest employer in Harrismith!
All this while Ramaphosa was jetting around the world telling every nation in sight to invest in SA!