The ANC has breathing space to recoup and regain its popularity.
By Antony Sguazzin, Bloomberg 22 Oct 2019  16:27 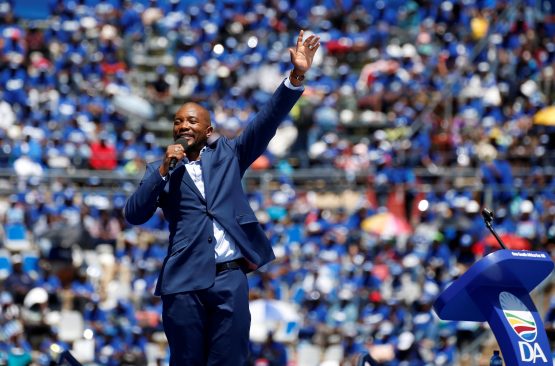 The return of Helen Zille and troubles within the party puts DA leader Mmusi Maimane's job on the line. Image: Siphiwe Sibeko, Reuters

An all-white candidate pool for one of the DA’s top posts led to the elevation of a divisive former party leader, and has pitted its senior white and black leaders against each other. The months of infighting erupted into the open just months after the ANC achieved its worst-ever national election result in May, winning 57.5% of the vote.

“If the ANC plays its cards right they are going to bounce back out of this,” said Ralph Mathekga, an analyst and author of books on South African politics. “When the DA suffers, the quality of the opposition in South Africa suffers. It will no longer be a guard dog to the ANC.”

The opposition meltdown gives the ANC some breathing room as it attempts to recover its popularity following the scandal-ridden nine-year rule of Jacob Zuma, who was forced to resign in February last year. Since then, the economy has barely expanded, the rand has dived 20% against the dollar and the state-run power utility has plunged the nation into periodic darkness as it tries to avoid a default on its $30 billion in debt.

The extent of the DA’s troubles became evident on October 20, when it elected Helen Zille as chairwoman of its Federal Council, one of the party’s most powerful posts. Zille was forced to step down from the DA’s top leadership in 2017 after she posted a series of tweets defending aspects of colonialism.

Zille has clashed with DA leader Mmusi Maimane, 39, who has been under pressure to quit since the party posted its first-ever drop in support in the national elections in May. With the DA planning an electoral congress soon, Maimane’s job could be on the line.

The fault lines became even more pronounced on Tuesday when the party’s Herman Mashaba, 60, said he was quitting as Johannesburg’s mayor because he believes Zille’s appointment constituted a victory for a DA faction that opposed race-based redress and clashed with most South Africans’ values. Maimane stood next to Mashaba and called him a hero.

Aside from the DA, the only other significant opposition party is the Economic Freedom Fighters. It campaigns on a brand of racial populism, has struggled to expand its support base of young, disaffected urban black South Africans and has been beset by corruption allegations in recent months.

The DA, which with its liberal roots has mainly drawn support from racial minorities, has failed to clearly articulate its stance on affirmative action and other policies that differentiate it from the ruling party. The DA also allied with the Mmusi Maimane to wrest control of Johannesburg and the capital, Pretoria, from the ANC in a 2016 municipal vote, further alienating traditional supporters and exacerbating tensions in its leadership.

While 68 year-old Zille, who led the party from 2007 until 2015, began the process of trying to build a multiracial, middle-class party, her attempts to promote black leaders have been characterised by missteps. She fell out with her protege, former DA parliamentary leader Lindiwe Mazibuko, in 2014. The same year an alliance with the Agang SA party that would have seen its leader, Mamphela Ramphele, run as presidential candidate for the combined parties lasted five days.

“The party needs something entirely new. It’s certainly not Helen Zille,” said Claude Baissac, the head of Eunomix Business and Economics Ltd., which advises on political risk. “To be a kind of Anglo Saxon liberal-style party in a country that is affected by devastating unemployment and racial inequality is absurd.”

Maimane said in a statement that Zille would bring new energy and ideas to the party, and called for it to unite. Zille denied she intended challenging her successor’s authority in her new role.

“This is a job that coordinates the structures, functions and systems of the Democratic Alliance,” she said in an interview with Johannesburg-based broadcaster eNCA. “I will stay in my lane.”

In a country where about one in 12 people are white, Zille competed with three white men for her position. Maimane is the party’s first black leader.

“The history of this country is a history of oppression. It’s very hard to talk about non-racialism,” said Ntsikelelo Breakfast, a politics lecturer at the University of Stellenbosch. “You need to play some politics. It’s unwise when you have an election of that magnitude” to only have white candidates, he said.

The all-white line-up has already been seized on by the DA’s opponents.

“You are dealing with the consolidation of a racist caucus,” EFF spokesman Mbuyiseni Ndlozi told the South African Broadcasting Corp.

The SA of the past was a “whitewash”.

(The comments board is really quiet….like returning from a funeral 🙁

“You are dealing with the consolidation of a racist caucus,” EFF spokesman Mbuyiseni Ndlozi

Mbuyiseni Ndlozi, you are right about the EFF

And the nominations for SA’s biggest self-destruction unit are:

The DA authored their own irrelevance.

No real policies, captured by backers that will not allow significant and necessary change in an impotent Judicial system, and lacking leaders with vision and backbone, they will drift on into oblivion like COPE.

Zille may steady the ship now, but she built a foundation of clay. No surprise it’s unraveling.

It seems that the DA has already chased its voter base away. So who does one vote for ion order to have a sane opposition. Not the EFF. So who is waiting in the wings to pick up the pieces that are broken by the actions of the aged Helen and the Arrogant Mmusi?

I was listening to a black caller on 702 who made a big impression on me.
He said the DA should keep doing the right things. The black voters do not care if there is a white or black person in leadership.

Only politicians make an issue of the racial “divide”. All decent South Africans want the same things.

Biggest mistake by the DA was going into coalition with the EFF. Their messages and actions have really become confusing.

Stick to your principles and remind the population regularly on what you want to achieve.

‘The DA also allied with the Mmusi Maimane to wrest control of Johannesburg and the capital, Pretoria’ – huh ?

Maybe there’s too much emphasis on the top officials.

Does the Moyo/Old Mutual board spat have much impact on me as a customer ?

Likewise do the faces at the top of the DA have that much impact on its ability to run a clean administration ?

While the DA has some difficulty in unifying around distinctive policies, it is quite capable of distinguishing itself on implementation of something other than organised crime.

The DA in its quest of political correctness to increase its appeal to voters chose a black leader, not the best leader available, a black leader. That started the DA’s descent into racial politics as it now had to play its own race card to its own members. It now had to go dig up racist rhetoric to defend against the ANC and EFF. I can’t remember what lead to the “don’t vote for me if you are racist” saga, but it was a swipe at probably white voters.
If you try to run the DA by a balancing act with “race” in the mix you are trying to compete with the ANC on its own terms and not a tenable position,
The DA can only save itself by governing effectively and to build up a track record of good governance over many years. That way it can build up a support base of like minded people (those that value good governance) and never refer to race again.