Minister denies being ‘a rogue’ and misleading the National Council of Provinces on the matter.
By Roy Cokayne 24 May 2021  00:01 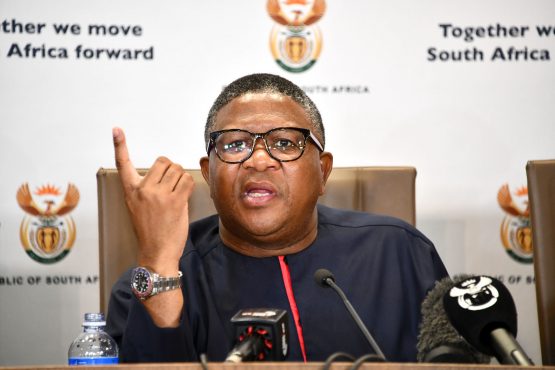 A decision by the government on the future of the e-toll system on the Gauteng Freeway Improvement Project (GFIP) is “imminent”.

Transport Minister Fikile Mbalula, who has previously made several commitments about the deadline for government to announce a decision on the controversial scheme, said this after delivering his budget vote speech on Friday.

“I’m not a rogue. I’m part of a collective and part of cabinet. E-tolls is a decision that requires government. Yes, I lead that. That is my responsibility.

“I have presented nine possible solutions to the e-tolls impasse, which I inherited. It is not easy because if it was easy, a solution could have now been pronounced.

“Government is on the verge of resolving this matter and the National Treasury has been mandated to work with us to resolve this matter.

“It’s a tough job balancing the government’s books,” he said.

“We are near to finding a solution to this matter and a sustainable, responsible [decision] within the available legal framework.

“An announcement is imminent. I have therefore not misled the NCOP [National Council of Provinces],” he said.

Mbalula made his most recent e-tolls deadline announcement on May 6, when he told the National Council of Provinces (NCOP) that a government announcement on the future of e-tolls would be made in the next two weeks.

This meant an announcement should have been made by the end of last week (May 20).

Read: Government fails to meet its own deadline (again) on the future of e-tolls (May 21)

Organisation Undoing Tax Abuse (Outa) CEO Wayne Duvenage said last week the organisation will not be surprised if an announcement on e-tolls is not made because of missed deadlines in the past.

“Fikile just keeps digging this hole and the trust deficit keeps getting wider and wider,” he said.

Mbalula confirmed on Friday that the first of the nine options presented to government to resolve the issue was “to scrap the e-tolls”.

However, Mbalula highlighted the financial commitments that have been made in terms of the repayment of the debt to finance the GFIP.

Mbalula said “scrapping [e-tolls] means nothing”, stressing the bigger issue is servicing the debt and that for the government to sustain its position on the bond market, it has to live up to its obligations.

Mbalula confirmed he wanted to make an announcement on e-tolls before his budget vote speech on Friday and the start of the department’s new financial year but was unable to do so.

“It is part of the agenda because it is huge in relation to our funding model and what we want to do in terms of road infrastructure in the country. So we have got to decide on it,” he said.

Mbalula added that the government could not consider the scrapping of e-tolls without also looking at the future funding model of the SA National Roads Agency (Sanral).

Read: Sanral is unable to meet its financing obligations (Oct 2020)

“Sanral plays a crucial role in the upgrading, maintaining and rehabilitation of our national road network.

Mbalula said a core focus over the medium term is the upgrade of the R573, popularly known as the Moloto Road, with an allocation of R2.7 billion.

He said transfers to fund reduced tariffs for the GFIP amounted to R2 billion over the medium term, while 53.6% or R34.8 billion of allocations to the agency are to maintain the national network of non-toll roads.

The end of the world is also imminent, we just don’t know when.

A thousand years is but one day in the sight of God, so when an ANC cadre says “2 weeks”, he is talking in biblical terms. It may be 2022, it may be 2031, or it may be never. Please don’t question Cde Fikile’s godlike powers.

Now that egg on face Mbalula’s previous announcement has come and gone he tries to save face with diverting the blame on “others”.
The decision is now “imminent”, which in political speak means a thousand years.

What a nice compliment.

“I’m not a rogue. I’m part of a collective” of rogues?

I’m guessing he’s diverted a lot of taxpayer cash into ANC pockets from etolls, SANRAL, PRASA etc. That is why he is still a “minister”. Zero to do with actual accomplishments.

Talk, talk, talk, is all you lot can do. Whether it is meetings, imbizos, lekgotlas, bosberaads etc it doesn’t matter. And after that, there will be more talking and consulting with the community. Back and forth and back and forth. Consult those who are living and consult the ancestors who are already dead. That is why nothing ever gets done and no progress is made in Africa.

You rest assured, no matter what decision is made with eTolls -some ANC Cadre out there will still benefit.

Does anyone take anything this clown says seriously?

Reminds me of the honourable Gordhan’s “imminent” announcement of the three equity partners for SAA back in March. In an administration which is world class in terms of ineptitude, this man stands head and shoulders above them all IMO.

Runners up are: SABC’s Hlaudi and SARS IT chief Mmamathe Makhekhe-Mokhuane

“I have presented nine possible solutions to the e-tolls impasse, which I inherited.”
Let’s hope that eight of them are simply “Scrap E-tolls” and the ninth one is “Scrap E-tolls and refund everyone that has paid”. Otherwise he is wasting his time.