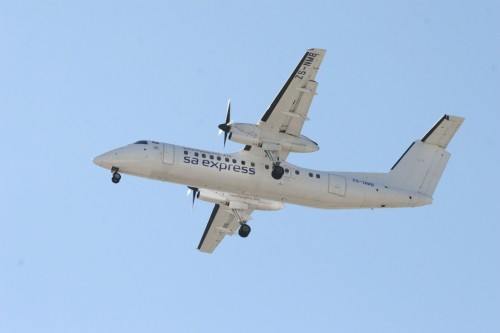 A small victory in 2020. Image: Moneyweb

SA Express’s employees are set to become its owners, after getting the go-ahead late Tuesday (September 22) from its provisional liquidators Tshwane Trust and the Department of Public Enterprises to buy the troubled state-owned airline.

Accepting the bid by its employees means SA Express, which went into business rescue in January after it could not pay a R11.3 million debt, will not be liquidated.

Sikakane says the idea to have the employees take ownership was first floated by acting Public Enterprises DG Kgathatso Tlhakudi a few weeks ago.

One of SA Express’s unions also backed the move to have its employees become shareholders.

National Union of Metal Works of SA (Numsa) spokesperson Phakamile Hlubi-Majola says that while it preferred the airline to remain in state hands, as it is a strategic asset, it supports the move on the part of its employees.

Although getting the buy-in of the business rescue practitioners and the state were important steps, Sikakane says a lot of hard work still lies ahead, as putting together a crowdsourcing bid to save an airline has never been done before.

She says one of the things that still must be figured out is the institutional arrangements between other prospective shareholders and the employees. At this stage, for instance, the people providing financing might want to bring in their own management structure.

While the details of the ownership and management structures still have to be worked out, Sikakane says the staff already have some ideas about how they want the new SA Express to be run.

For her part, Uprise.Africa’s Qadir says the moment for this type of crowdfunding has come.

“Equity crowdfunding certainly comes as an alternative way of funding to realise their dreams in a time of economic crisis where mainstream funding solutions are harder to break into.”

Equity crowdfunding is where mostly small investors get shares in a company in exchange for investing in it.

The newness of equity crowdfunding in SA, however, means Uprise.Africa will be taking some precautions to protect all involved, Qadir says.

A due diligence, for example, will be carried out by external aviation experts and will be “facilitated by the anchor investor who has shown keen interest to subscribe for shares before it is open for initial public offering”.

Uprise.Africa will also adopt a screening process to identify between “sophisticated and non-sophisticated investors”.

If an investor is deemed “non-sophisticated”, they will be urged not to invest more than 10% of their net investable assets via the equity crowdfunding platform. This is to prevent non-sophisticated investors from allocating a disproportionate amount of their net worth to this alternative asset class.

Investor registration is set to start in October, and registered organisations and individuals will be able to make an investment pledge in November.

Investors looking to exit eventually will be able to do so via ZARX, an alternative stock exchange that has entered into a partnership with Uprise.Africa.

What is a ‘sophisticated and a non-sophisticated’ investor? Shouldn’t all investors be sophisticated? Do I smell a little bit of racism here?

No racism here. Simple economics 1 fact. Law of have and have not.
You have. we have not, but in order for us to have equilibrium must be
reached. How do we achieve equilibrium? you might ask. Again simple,
we have from you especially when you sleep at night or leave it in your car. In most cases we have the car as well but for convenience we only have it.

Thanks for the reminder to renew my gun licences. Half of the licences are still OK. The other half will take hours to do. 🙂

so its privatised. how it can be called a strategic asset I dont know except if used for smuggling and money laundering

This is exactly it. The extraction of resources from the state.

This is why the Gupta landed their plane at Waterkloof… weak checks and balances….but while the wedding was taking place…these guys looted the country…. the biggest robbery in town.

oh …. lets not for Aces uber ride to zimbabwe recently

Would be interesting to see how many new shareholders will remain union members and what their reaction would be when the union starts to destroy their business.

Good luck to them. This is the new SA we have to do everything (security, schooling, electricity, water etc.) for ourselves.

You sound like my mom. She always refer to them (hulle). When quizzed my mom cannot give definitive answer about the identity of them.

Reminds me of something. A Mauritian friend of mine visited Slaapstad for the first time. His g/f went to introduce him to family. When they left after two hours, they departed. On way to hotel, he asked g/f
Who is wiejy (weet jy). Apparently wiejy is related to them(hule).

Just go get help for your obsession with race already. Please. Your little turds are getting tedious.

What about crowdfunding Eskom? Lol

To Black Tin. Crowd funding at Eskom is already happening. Except the wrong crowd is doing the funding, lol.

SAA has had Crowdfunding for years : called the Taxpayer !!

hahahaha what a farce. Africa joke. Watch this space soon as they need another R500m. Soon to a crowdfunding opportunity close to you.

ps: Headline misleading as usual.Nothing has happened yet. Nothing will happen .Wishful Africa BS talking. Wonder with how much unions will ” back” the scheme.

No-one remembers Skywise that operated for 8 months in SA? Same crowd doing the rescue this time around.

How do you turn a large fortune into a small fortune? By starting an airline!

When this inevitably collapse (due to Covid, generally weak economy, take your pick) the SA taxpayer will be on the hook

What is this damn fascination about owning an airline???!!! One of the lowest margin and highest risk industries around! FOOLS – the lot of them.

Even the unions will not invest; rather collect royalties/annuities from their constituents. Unions and Life insurance companies operate the same way in the name of “protection”. One in case of death and the other in case of a grievance.

Totally misleading headline.No investor with real cash is going to use give shares to employees who take no risk.Dream on .