Eskom: De Ruyter has a plan up his sleeve André de Ruyter has been warned to ‘stay in his lane’ by Minister of Mineral Resources and Energy Gwede Mantashe. Image: Moneyweb

In an apparent effort to take the lead in ending the increasing and economically devastating load shedding, Eskom CEO André de Ruyter and board chair Professor Malegapuru Makgoba have invited local and international energy experts to an “electricity crisis roundtable” later this month.

They will present a proposal developed internally and approved by the board last month at this, the first in a series of events that will also include engagement with intensive users and funders.

Read:
Load shedding all but a certainty until these things happen …
These charts show the Eskom crisis has been two decades in the making

The engagements, which Eskom has formally notified the Presidency and several government departments of, will seek input regarding the proposal, which will be consolidated into a final proposal to be shared with the relevant ministers and made public during August.

This comes against the backdrop of ever-increasing load shedding, although South Africans had some relief with no load shedding instituted over the past week.

Eskom’s latest data shows that more than 30% of its generation capacity has been offline due to unplanned outages for the last four weeks.

The average generation fleet availability factor so far this calendar year is only 59%, compared to 61.79% in 2021. During April and May Eskom had to revert to Stage 4 load shedding, which is more intense than the worst scenario anticipated in its winter plan. In May it also exceeded the 22 days of load shedding anticipated in that scenario, ending the month with 26 days of insufficient power supply.

In the meantime, Eskom’s Reliability Maintenance Recovery (RMR) Programme is not yielding the necessary results. Only 47 of 84 projects were completed in the previous financial year, with many being deferred due to lack of funds and operational challenges. Eskom recently reported on this, as shown below. 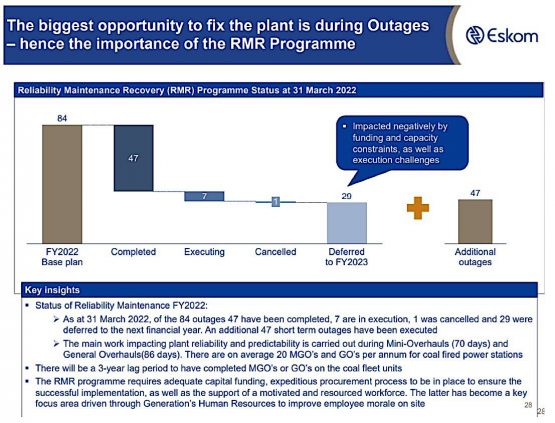 De Ruyter has in the recent past increasingly rephrased his messaging from Eskom pinning its hopes on maintenance to improve the performance of its generation fleet to the need to create more generation capacity.

He has been clear that the supply gap is between 4 000 and 6 000 megawatts (MW), and that expedited procurement from independent power producers (IPPs) will give Eskom the space to fix its aging fleet.

Eskom is however not mandated to procure energy from IPPs. This is the job of the Department of Mineral Resources and Energy (DMRE), which has widely been seen as slow, if not reluctant, to do so.

The DMRE’s emergency procurement programme to procure 2 000MW of additional generation capacity, launched in August 2020, has been fraught with problems; only projects of just 150MW have been able to sign power purchase agreements, which is an important step towards financial close.

De Ruyter’s statements about additional power have prompted Minister of Mineral Resources and Energy Gwede Mantashe to warn him to “stay in his lane”.

A plan to deal with reluctance and resistance?

It looks as if the move to present a recovery plan and mobilise support for it is aimed at bypassing reluctance and resistance in the system.

Moneyweb has been told that Eskom sees the upcoming crisis roundtables as an opportunity to give context and facts to the debate around power supply in SA.

Read:
Scatec’s Kenhardt solar venture will be ‘one of the largest in the world’
Eskom’s three worst-performing plants responsible for nearly half of all breakdowns

It also hopes to create more appreciation of the role and responsibilities of parties and institutions outside of Eskom on which key aspects related to solving the electricity crisis depend.

This includes policy that resides with the DMRE, regulatory issues that lie primarily with  energy regulator Nersa, and legislative issues that must be resolved by parliament.

What De Ruyter’s plan entails is not yet clear.

The programme to finalise the plan includes engagement with funders in the UK, Germany, France, USA, Denmark, China, Japan and South Korea.

Whether Eskom will be able to take on any new debt, however, remains to be seen.

When the availability of $8.5 billion in green financing was announced at the COP26 Climate Change Conference late last year, Eskom CFO Calib Cassim said the utility would not be able to take on any new debt unless its current debt level has been reduced.

Energy expert Chris Yelland of EE Business Intelligence has proposed that Eskom sell its old power stations and use the proceeds to reduce its debt.

He further proposes that Eskom get out of electricity generation and allow the private sector to provide power supply on a competitive basis. It should also get out of distribution, he says. Generation has failing power stations, and distribution is battling with huge amounts of unpaid consumer debt.

“Eskom has two toxic businesses and one fairly decent one,” says Yelland.

“Let the focus be on the operation and maintenance of the transmission system.”

The best plan would be law that ring-fences all SOEs from the ravages of BEE!

Just so ANC – Al,l the plans in the world and none but the looting parts work.

I’m afraid that you can have all the best intentions and all the funders in the world, but if the foundations are rotten, and by that I mean the cadre-controlled ANC and mediocre, lackadaisical, unproductive trade unions, they will sink like a brick.

What really needs to change is the criminal mindset that has infiltrated the entire economy and state, the abysmal eduction levels and the attitude of getting paid simply to pitch up at the factory gate.

Eskom has heard about the 8.5 billion dollars and reckons it should be in charge of spending it. They don’t get it : the money is there to reduce dependence on Eskom , not pay for new Eskom projects. Also, the foreigners are not dumb enough to EFT the $8b next week. Nobody gives the fat kid with diabetes a bag of sweets. They will give it indirectly and over the long term by way of for example waiving the interest payments on a $20b world bank or IMF loan for 20 years.

Do NOT spend a penny sticking cleaner exhausts on old Eskom fleet! That is lipstick on a pig.

Low cost project finance to a private consortium to build and operate 5GW 24h pumped storage. Must be EPC Turnkey and Ekom must e 0% involved, else Eskom will screw it up like Ingula 300% and frankly like every plant they built since 1950. After pumped storage is done it can move under Eskom Transmission or a central buyer. Even just that 5GW 24h ability would allow us to IPP another 10-20 GW of wind and solar and entirely eliminate use of diesel peakers.

Use some money to upgrade main transmission network so that we can operate a smarter grid of varied energy sources.

They are forever looking for a brilliant way of implimenting stupidity because it is stupidity that keeps them in power.