Eskom keeps investors in the dark as debt speculation mounts 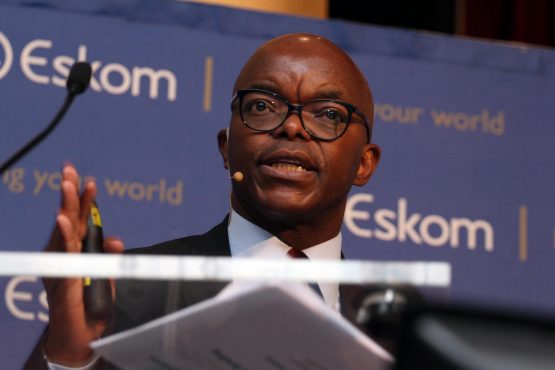 Eskom CEO Phakamani Hadebe. Eskom is in 'ongoing conversations' with lenders, its media desk has said in a statement. Picture: Moneyweb

As speculation swirls about plans to deal with Eskom’s crippling debt load, one group of stakeholders hasn’t been consulted: owners of the company’s R243 billion of bonds.

South Africa’s state-owned power utility is groaning under almost R500 billion of bond and loan debt, according to data compiled by Bloomberg, and isn’t selling enough electricity to cover its operating and borrowing costs. It’s already been given a three-year, R69 billion bailout by the government, but had to ask for emergency funding last month to remain solvent. President Cyril Ramaphosa insists that Eskom is “too big to fail,” but with the nation’s finances stretched to the limit and its last investment-grade credit rating hanging by a thread, the government has limited scope to continue bailing the company out. Vague plans for operational restructuring have been announced, but the National Treasury said it can’t give details until Ramaphosa appoints a new cabinet, scheduled for next week.

Eskom is in “ongoing conversations” with lenders, its media desk said in a statement to Bloomberg.

“We haven’t had any interactions with the company outside of the Stock Exchange News Service statements and newspaper reports,” said Olga Constantatos, a credit analyst at Cape Town-based Futuregrowth Asset Management, which oversees R185 billion including Eskom bonds. “There have been no details about what would happen to current funding and a restructure. But there are multiple decisions at multiple levels that need to be made. It’s getting quite urgent now, there’s too much debt.”

Eskom’s bond yields suggest investors are confident — for now — that the company will be able to meet repayments in the short term, with or without government help. Yields on dollar securities due 2021 have dropped 62 basis points to 5.87%, since May 14, when Ramaphosa said that Eskom wouldn’t be allowed to go under, and are now at the lowest since February.

Full Statement by Eskom’s Media Desk “We are in ongoing conversations with our lenders and we have updated the market on liquidity and our borrowing plan. Questions regarding plans on the turn around should be directed to the shareholder representative.”

While the Business Day newspaper reported on Monday that South Africa is considering the creation of a special-purpose vehicle to take over a large portion of Eskom’s debt, Finance minister Tito Mboweni said he wasn’t aware of such a plan. The utility should first collect R17 billion of debt arrears from municipalities, he said in an interview.

Other analysts have speculated that the government may swap some of Eskom’s debt for sovereign bonds, an option mooted by chief executive officer Phakamani Hadebe in February. Moody’s Investors Service, the only rating company still to assess South Africa’s credit at investment grade, already counts Eskom’s government-guaranteed liabilities — about 70% of the bonds — as government debt.

But all that is on hold until Ramaphosa’s new executive is in place.

“There is nothing official,” said Pavel Mamai, founding partner at London-based hedge fund Promeritum Investment Management.. “Nobody from the government or Eskom has contacted any of the investors. Nothing can be on the table before the new government forms, they have different priorities now.”

A debt swap would make sense, because the state pays lower rates than Eskom, said Mamai. The company’s credit rating at Moody’s is seven levels below the sovereign’s at B3. But speculation of a such a move sent government yields higher last week as investors fretted about the potential increase in borrowing.

So far, investors have given Ramaphosa — who is set to be sworn in on Wednesday for his first full five-year term as president — the benefit of the doubt. But unless he comes up with a credible plan soon to fix what Goldman Sachs Group has described as the single biggest threat to South Africa’s economy, that indulgence won’t last.

“Eskom is a big worry; they need to get Eskom right and quickly,” said Constantatos at Futuregrowth. “I would like to see some milestones. What can we expect and when. How do we know if they are being achieved. There’s a lot we don’t know. Eskom is of such importance, more frequent communication would be quite useful.”

The last time (a few years back) Futuregrowth commented publicly on SOE det and risk to the sovereign, its CEO at the time almost got fired! Obviously because he spoke the truth!
He said then that Futuregrowth wouldn’t be prepared to simply just carry on lending to the SOEs – or something to that effect. But had he not said anything that time, South African tax payers would probably STILL be in the dark about the extent to which they’re actually carrying the debt load of non-performing SOEs like Eskom.

There is almost more unsaid than said in this press release. The debt swap; are investors simply going to passively hand over Eskom bonds to a lower yield sovereign bond? Then the Eskom bond rates in US$ – how does this correlate to the ZAR exchange rate?

The real take home confessions for me. Eskom cannot pay off its debts from its business (so selling it, splitting it up etc are just jokes like “selling” SAA) and SA’s finances are stretched to the limit. And, no change on the horizon, anywhere.

So, predict what will happen next please. IMF begging, “sale” to the Chinese or pension pillaging?

Also it shows Ramaphosa, Gordhan et al are either too weak or too dumb to see / understand / interpret and act quickly and decisively, if at all. They are still gabbling about EWC etc.

Hmm…wonder what the fine print (actual deal) is with the China Development Bank that, along with Absa’s bridging finance, recently kept the wolf from the Eskom door…

…pension pillaging! 🙁 The easiest way out for govt.

If a business don’t get more income than their expenditure then it must fail. Unless expenditure is brought under control. Or in the case of Eskom the price of electricity goes up.
Eskom is dead. If we want electricity the tax payer is going to have to bail Eskom out. Take it or leave it.

The most obvious quick saving would be on the hugely over-inflated workforce and salaries. But in this black hole it won’t be PC and we’re too afraid of the unions. So no rational solutions are to be considered…

Hence I need to UPDATE my (previous) US Navy Nimitz-class aircraft carrier construction cost analogy. Per Wikipedia, the ave construction cost of such a ship is USD4,5bn as approved by US Congress (equiv in ZAR about R65bn each).

R500bn divided by R65bn (per nuclear-power aircraft carrier)….Eskom’s debt equivalent is now between 7-8 Nimitz-class carriers (up from between 6-7 ships 😉

There you have it folks, THIS is HOW MUCH R500bn of debt is in perspective (..and from ONE utility). In good ol’ Mzansi, we are able to construct Kusile, Medupi & a 3rd station with that money.

With the same funds, the US builds seven to eight nuclear Aircraft Carriers!!

I start to get the impression SA is in fact a super-wealthy state being able to waste such level of funding, OR the SA taxpayer is potentially in serious trouble. Only way to escape future taxation, is to become a tax-resident of another jurisdiction (hopefully not with the same national debt). Alternatively, and likely easier way out, would be to dip into citizens’ combined R4trillion retirement capital. Then govt can easily afford to add a few nuclear submarines as well…

Question remain: do I keep on funding my RA Funds (and other ‘compulsory’ funds) with its attractive tax benefits, OR forego the tax benefits and instead continue with discretionary investments directly offshore (without prescribed assets)? Tax saving versus flexibility…

And to add to your comment, the USA’s aircraft carriers are state of the art with 2019 (and beyond) technologies deployed (and they function properly). Medupi and Kusile effectively use 1980s technology.

Remember the arms deal? You would be lucky to get a single aircraft carrier for R500 billion. Do not forget the required local manufacturing, BEE, AA, backhanders, commissions, donations to the ANC, etc.

Please don’t let us get Aircraft Carriers and Submarines! The Navy can’t even keep the Frigates we bought a few years ago afloat and battle ready.

*lol* don’t worry about SA getting more navy ships 😉 The country’s leadership already SPENT it within Eskom. The US aircraft carrier analogy is an example of what such debt COULD’VE bought us.

Scary to say the least, now that R500bn is put into clear perspective.

What a pity JZ was ousted before his term expired. Had he stayed in place we might have racked up a few trillion more for some nuclear power stations.