A pollutant linked to ailments ranging from asthma to heart attacks.
By Antony Sguazzin, Bloomberg 5 Oct 2021  12:47 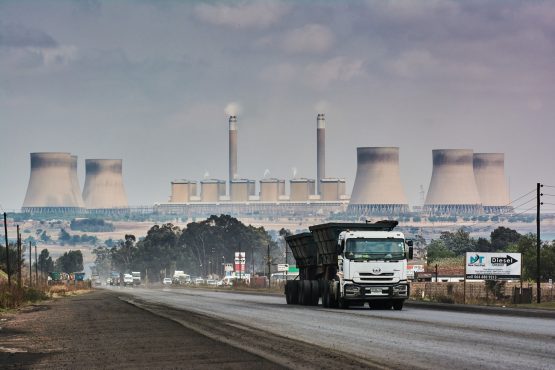 Eskom, South Africa’s coal-reliant power utility, has become the world’s biggest emitter of sulfur dioxide, a pollutant linked to ailments ranging from asthma to heart attacks, the Centre for Research on Energy and Clean Air said.

Eskom produced 1,600 kilotons of the pollutant in 2019, the latest year for which comparable data is available, according to the report released on Tuesday by CREA, an air-pollution research organization. That was more than any company, and the total emission of the power sector of any country with the exception of India.

While China, the U.S. and the European Union have slashed sulfur dioxide emissions in recent years by fitting pollution abatement equipment to power plants, Eskom has only done so at one of its 15 coal-fired facilities. Eskom has disputed a 2019 study that tie its emissions to more than 2,000 deaths a year, though it said its pollution killed 320 people annually.

“They need to comply with minimum emission standards to reduce the burden they place on public health,” said Lauri Myllyvirta, lead analyst at CREA, in an interview. “The only viable way to do that is to phase out some of the plants that are in the worse condition in terms of reliability and upgrade the rest.”

South Africa’s environment department referred questions on what Eskom is doing to fit its plants with pollution abatement equipment to the company.

“The department developed legislation to manage emissions,” the country’s environment department said in a response to queries. “In case of non-compliances, the department has a duty to enforce the legislation.”

China has slashed its annual emissions to 780 kilotons from 13,000 kilotons in 2006, CREA said. The nation’s biggest coal-fired power plant operator, Huaneng Power, emitted 26 kilotons of sulfur dioxide last year from a fleet of power stations with almost twice Eskom’s installed capacity of about 44,000 megawatts, it said.

Eskom’s pollution is also high because of the high sulfur content of the coal it burns, Myllyvirta said. South Africa’s sulfur dioxide emission limits were last year cut to 1,000 milligrams per normal cubic meter from 3,500 milligrams, well above the limits in India and China. 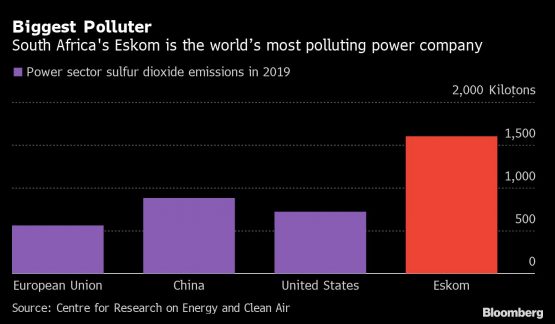 Myllyvirta put the cost of fitting Eskom’s plants with the equipment, known as flue-gas desulfurization units, at between 100 billion rand ($6.6 billion) and 200 billion rand. Eskom has previously said it would need to spend 300 billion rand to comply with South Africa’s emission standards.

The state-owned power utility is more than 400 billion rand in debt.

“Eskom is fully aware of its obligations to the environment and to the community,” the company said in a response to queries. “It has embarked on a program to transition retiring coal-fired power stations to renewable energy sources.”

This government is never satisfied with being second worst.

In the world?? Rubbish. Typical sensational headline. What about factories in China who has 24 times more people than SA.

The USA and China have almost killed the planet, now running for greener energies and then pointing the finger at South Africa.

Want us to use greener energy? then give us the money or invest in South Africa.

If they give money then the ANC will steal it… Eish…

So even if China fits pollution abatement equipment to all its power plants, they are still 1.3 Billion people compared to our 60 Million and they are the factory of the planet.

Methinhs you miss the point —
We burn some of the lowest quality coal (the highest grade gets exported) in our plants without flue gas scrubbing.
This results in the highest SULFUR emissions in the world.
Capice???

India also comes up on some stats sites as world’s biggest SO2 polluter. It all depends whose stats one use.

Never heard of the “CREA” before.

LOL — Gwede must be over the moon about his newest world record !!!
Expect parties !!!

Maybe you must call the old uncle Biden up north to print some more Dollars to build us a big nuclear power station?

I mean printing another $ 50 Billion is easy for uncle Biden and auntie Harris.

The colonial masters will have to clean this mess they left behind.

Afrika burns wood. This is all their doing. It would not be possible for Afrika to do this much harm all by themselves. Impossible. Maybe in another 1000 years.

SO2 is not only bad for humans it’s also bad for plants, trees, vegetation in general, as it is the major cause of acid rain. It had devastating effects on conifers at high altitudes especially in Europe, causing deforestation and erosion.
To implement the two legally required interventions of FGD, flue gas desulfurization AND ash filtering at all Eskom coal powered
generation sites would require an odd R 300 B was earlier calculated. At the moment there is only FGD at Kusile, and here and there some particulate filters.
Coal fired power stations must just be decomissioned ASAP.
Renewables are simply far cheaper, even when storage is included.
No comment by Chris Stoffel below this article, who still got nearly 100 upvotes with his comment supporting coal below this article :
https://www.moneyweb.co.za/news-fast-news/masondo-suggests-r146bn-of-sa-debt-be-forgiven/#comment-921714

But one “Prof” Mike Muller at Wits tells us it is good for carbon emissions; screw the rest. Eish SA!

Yeah, that article on BD.
https://www.businesslive.co.za/bd/opinion/2021-08-24-mike-muller-how-environmentalists-got-their-aim-wrong-and-shot-sa-in-both-feet/
Absolutely ludicrous, he is way off.