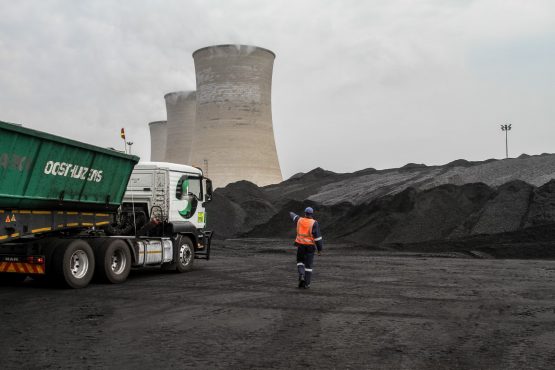 Power stations have implemented additional coal treatment plans and mines have been requested to operate throughout December. Photographer: Dean Hutton/Bloomberg

Eskom’s coal stockpile situation has deteriorated further, with five power stations having less than 10 days’ stock. Interventions to stabilise the coal supply may only have a positive impact by March next year.

This means Eskom is entering the rainy season in Mpumalanga extremely exposed and that load shedding is a real risk, Eskom spokesperson Khulu Phasiwe told Moneyweb on Sunday.

In the meantime, the power utility is using costly diesel plants to supplement the power generated by its coal-fired fleet. It is unlikely to recover this additional cost from tariffs and could see further deterioration of its finances due to this unplanned cost.

In addition, Eskom got a bloody nose in the High Court in Johannesburg when it tried to force one of its former coal suppliers, which had cancelled its contract with Eskom, to continue supplying coal to its Majuba Power Station near Volksrust in Mpumalanga.

Kuyasa Mining on Friday confirmed to Moneyweb that it stopped supplying about 140 000 tons of coal per month to Majuba – through its subsidiary Delmas Coal – late in October. In court papers Kuyasa, an emerging miner, accused Eskom of negotiating in bad faith about a sustainable tariff escalation model, and said the current rate of R12.34 per GigaJoule (GJ) at which Eskom buys coal from the group is less than its cost of production.

Kuyasa claims it has been subsidising its coal supply to Eskom by R12 million per month for the past year and that this is ruining the group financially. The payment terms were 30 days after receipt of Kuyasa’s invoice.

Kuyasa has offered to continue supplying Eskom until the matter has been settled in arbitration, but then Eskom must pay it R27/GJ on a cash-on-delivery basis. No date has been set for the arbitration.

Eskom has rejected this offer and questions the economic hardship Kuyasa claims. An affidavit prepared for court by Petrus Mazibuko, an Eskom manager for primary energy, points out that Kuyasa paid its staff bonuses of R18 000 each in 2017/18. Kuyasa claims the payments were in fact for overtime.

Moneyweb earlier reported that Eskom paid its staff bonuses of R88 000 on average in July last year and accepted a wage agreement in August this year that included a R10 000 after-tax “settlement bonus” for every one of the more than 33 000 members of the bargaining unit, in addition to a wage increase way above the inflation rate.

Mazibuko says in his affidavit that Eskom cannot afford to pay Kuyasa so much more for its coal and accuses Kuyasa of planning to export the coal at a higher price. Kuyasa rejects Eskom’s poverty claim and refers it to the R600 million coal prepayment it made earlier to a Gupta-owned mine.

In his affidavit Mazibuko discloses that Majuba’s reserve stock levels were at 9.3 days on October 26, and that Eskom was diverting coal from other power stations to Majuba. The stock levels at these power stations were however also critically low, as he illustrated in this table:

This is in contravention of the South African Grid Code, which requires Eskom to maintain stock levels at 20 days.

Mazibuko also warned that should Kuyasa be allowed to cancel its coal supply contract because it wants a higher price, other suppliers will follow suit and export their coal, leaving Eskom without coal.

In August Eskom CEO Phakamani Hadebe disclosed to parliament that Eskom’s coal-fired power stations, excluding Medupi and Kusile, had coal stockpiles of on average 28 days, but that 10 of the 15 stations had less than 20 days’ stock.

Phasiwe told Moneyweb on Sunday that this has since deteriorated to 25 days on average, with 11 power stations now left with stockpiles of less than 20 days. Of these, five have less than ten days’ stock, he said.

Of the 12 coal supply contracts that Hadebe told parliament were being negotiated, six have been signed and two of the six are already delivering coal, according to Phasiwe. Of the other four signed contracts, one will start delivering in December and the others early next year.

Phasiwe says Eskom hopes to have to coal stock stabilised and back to the required levels by March next year.

He adds that Eskom has engaged Transnet to transport coal from Medupi in Limpopo, where there is excess coal due to the late completion of the power station, to Kendall near Ogies in Mpumalanga.

He points out that Majuba also has a rail link and says some of the newly concluded contracts are for coal supply to Majuba.

In Mpumalanga, where most of the coal mines feeding Eskom’s coal-fired power stations are situated, December, January and February are the rainy months. Phasiwe says Eskom is concerned that the low coal stock levels could leave it exposed if the mines are forced to stop production for a few days due to heavy rain.

He says the power stations have however implemented additional coal treatment plans, such as compacting four to five days’ of coal stock to keep it dry for use in the event of continuous rains.

“All the mines have put in place treatment plans to ensure quick mine start-up after heavy rains,” he adds. “These measures include adequate pumping capacity in the pits, adequate drainage at mines’ final product stockpiles, and continuous total moisture content analysis.”

He says Eskom has requested all mines to operate throughout December and that they are finalising volunteer staffing plans to that end.

In the meantime, Eskom has embarked on another urgent coal purchasing process. It is waiting for alternative coal offers from its current suppliers and has identified suppliers it doesn’t currently deal with that have capacity to supply the Eskom power stations.

Anc policies proudly displayed to the world at just how ineffective their flagship was going to be …..!
A legislated monopoly and it still can’t make it!
Just get on and privatize it and let companies compete to supply power . All problems solved !
Rather obvious isn’t it?

It is not possible to privatise Eskom. If it were a private company who will supply all the free and unmetered electricity to Soweto and other townships?

Very little mention ever seems to be made of the environmental disaster of burning diesel to produce electricity. We have some of the most polluted air in the world from our coal fired power stations and now we burn diesel which is even worse. We do this in a sunny climate that is perfect for solar power.

The chickens are coming home to roost now. The previous Eskom board and management broke their coal supply chain over many years by fragmentizing it among many short-term suppliers, not investing in tied colliers, not signing a coal supply agreement for Kusile, and then for good measure we had the Oakbay/Tegeta fiasco. They should own this problem, instead of blaming it on renewables.

Spare a though for the current Eskom board and management who inherited this mess. Unfortunately coal supply is a long-term business and it will take years to turn it around.

Spare a thought for Eskom, no ways.

I spare my thoughts for the South Africans citizens who day to day face the hardship of pathetic leadership. Blind and as incompetent the voters night be they are suffering to the utmost.

I guess you get what you vote for.

All the more reason to move away from coal!

To What? You can’t tax the sun and electricity carries substantial taxes etc… for the government. How do you plan on replacing that income?

I get to use my generator again

remember to shut down the fuel supply before you turn it off. That way the carb isn’t full of fuel and fouls up.

i HAVE LEARNED THAT THANK YOU !

And they sat on how many IPP contracts delaying and deceiving the public that Sun and wind power was expensive. Those plants would have been running by now and kept things going during the day. Lots of businesses close at 5 when the wind dies so the demand won’t be that high, it would be tight but manageable not as the future looks like now.

SA faces lights out, unless Ramaphosa can fix Eskom

SA faces lights out, unless Ramaphosa can fix Eskom